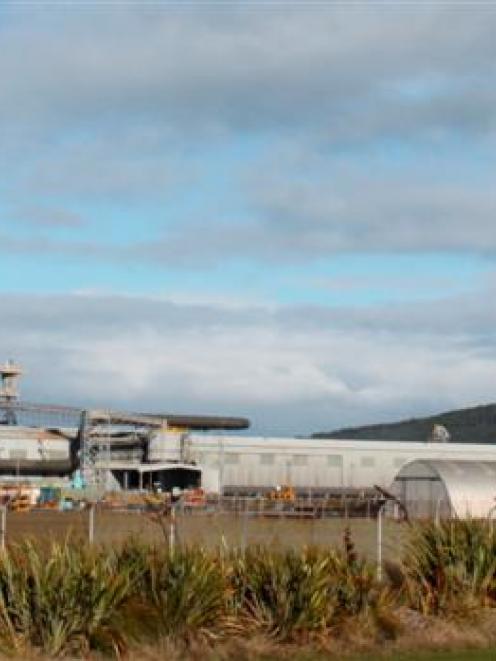 The Government's $30 million payout to New Zealand Aluminium Smelters has attracted criticism. Photo by Allison Rudd.
The Government's decision to supply the operator of the Tiwai Point aluminium smelter with $30 million to secure a power deal with Meridian Energy is seen as a cynical attempt to lift the state-owned power company's value to future shareholders.

Meridian and New Zealand Aluminium Smelters have been in negotiations for around a year. The smelter's owner, Australian resources giant Rio Tinto, has been pushing for a reduction in the electricity generated at Manapouri and bought through Meridian.

Milford Asset Management senior analyst William Curtayne said from Auckland Meridian was likely to be listed for between $2 billion and $2.5 billion, so $30 million was a small percentage to pay, to increase the listing price of the shares.

He expected Meridian, the largest of the Government's state energy assets being sold, to be offered to the public in late October. An announcement could be made when the company reported its annual results, possibly next week.

After the disappointment with Mighty River's share price, the Government would be keen to ensure the Meridian float went smoothly, Mr Curtayne said.

The Government had decided more than $30 million would be gained in the Meridian sale with better pricing, due to the increased certainty around this contract.

''The move will also help to keep jobs in Southland but the reality is a lot of new efficient aluminium capacity is being built in Asia so we do not know if this smelter will be competitive in four or five years.

''All in all, this is a positive outcome, with the smelter remaining open but with Meridian and the Government not committing long-term subsidy to NZAS to do so.''

The deal was signed only until January 2017 and, as the electricity price offered to Rio Tinto was low, Meridian should be able to sell that power at a higher price into the general wholesale market when the contract expired - or aluminium prices had improved and Meridian could increase the price for the Tiwai smelter, Mr Curtayne said.

The contract allowed for increases should the New Zealand dollar aluminium price increase.

The guarantees from NZAS parent Rio Tinto and Sumitomo very important for Meridian, because Rio Tinto might spin the smelter off into its own vehicle.

''This vehicle may collapse with weak aluminium prices and hence not be able to pay off its contract with Meridian. This ... was probably the major sticking point in the contract,'' he said.

Finance Minister Bill English - Meridian's Manapouri plant is in his Clutha-Southland electorate - said the one-off $30 million incentive payment was to help secure agreement on the revised contract, because of the importance of the smelter to the stability of the New Zealand electricity market.

SOE Minister Tony Ryall said the Government was not directly involved in the negotiations, which took more than a year.

However, earlier in the year, Mr Ryall admitted that because of the significance of the smelter to the national economy, the Government had initiated contact with Rio Tinto, but only to explore what it could do to close the short-term gap in value between Meridian and Rio Tinto.

''National is so desperate to get Meridian sold off that it has given Rio Tinto a $30 million bonus to seal the deal and all the company has to do is keep the smelter open for three and a-half years.''

Rio Tinto also reduced its notice period. It would now be able to walk away with notice of 15 months.

The people of Southland would breathe a sigh of relief but it would last only until January 1, 2017, he said.