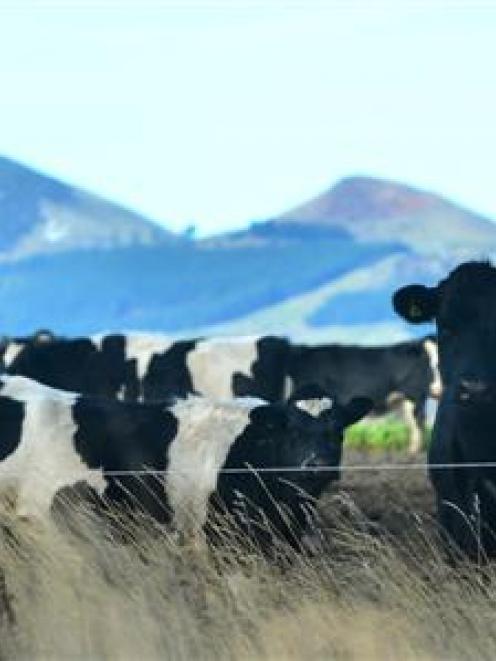 Milk production is expected to rebound after last season's drought, compounding gains for farmers from an expected increase in payout. Photo by Peter McIntosh.
A 50c increase in Fonterra's forecast milk price for 2013-14 has been described as an ''overdraft clearer'', allowing farmers to pay back credit lines extended to them during widespread drought.

Yesterday, the dairy giant announced it had lifted its forecast farmgate milk price to $7.50, with an estimated dividend of 32c per share, amounting to a forecast cash payout of $7.82, reflecting continuing strong international prices for dairy.

The co-operative also confirmed a further increase to the advance rate schedule, starting from $5.50kg ms.

The forecast payout lift, combined with an expected rebound in production, represents a sizeable boost to New Zealand's national income.

The $1.70 lift in the milk price [from last season] and a 5% lift in production would boost the economy by about $3.4 billion, or about 1.6% of nominal GDP, compared with the 2012-13 season, Westpac economist Nathan Penny said.

Fonterra's most recent forecast for annual production growth sat at 2% but the bank was ''more bullish'' and predicted 5% growth, Mr Penny said.

Drought was a major factor behind farm debt growing to about $51.7 billion. Much of the forecast, if it stuck, would go to paying down those credit lines, Mr Leferink said.

The forecast increase was also a ''beautiful opportunity'' for farmers to build up cash reserves to further improve water quality, Mr Leferink said.

A high milk price could be a ''double-edged sword'' for Fonterra's overall performance, as it generally meant the cost of raw ingredient also increased.

''We believe there will be a lot of pressure on Fonterra to come up with a substantial dividend but a high milk price will put pressure on margins. That is not necessarily a bad thing, as it will drive the company to perform,'' he said.

DairyNZ chief executive Tim Mackle said the payout translated into another $845 million circulating in the national economy from farmers.

However, he also warned it was ''just a forecast''. It was still very early in the season and things could quickly change.

''Remember, we started off with a hiss and roar last season in terms of milk production, and ended up with the worst drought in 70 years. It highlights the need to keep planning and monitoring to make the best decisions.''

Dr Mackle agreed many farmers would use the payout forecast to pay off debt. While the level of farm debt servicing was about twice today what it was a decade ago, the distribution of that debt was not uniform.

About 20% of farms had virtually no debt while another 20% carried 45% of the debt, so the level of payout forecast was obviously more significant for those carrying a lot of debt.

Farm working expenses now averaged about $4.30 to $4.50/kg ms and, coupled with the extra costs incurred to service the higher average debt levels, many farmers needed good milk prices to build resilience and strength into their businesses.

''Essentially growth in farm operating expenses and debt servicing has roughly matched growth in income, despite improved milk prices. The high advance rate also helps farmers with cash early in the season when they need it most.''

Given the volatility of the market, Fonterra Shareholders Council chairman Ian Brown also urged farmers to still be prudent in their financial planning.

At the start of this season, Fonterra forecast that dairy commodity prices would continue at or near current levels until the fourth quarter of 2013, chairman John Wilson said.

However, supply constraints in Europe and China during the northern hemisphere spring had contributed to an increase in prices of 3% over the past two months. In addition, the New Zealand dollar had weakened against the US dollar.