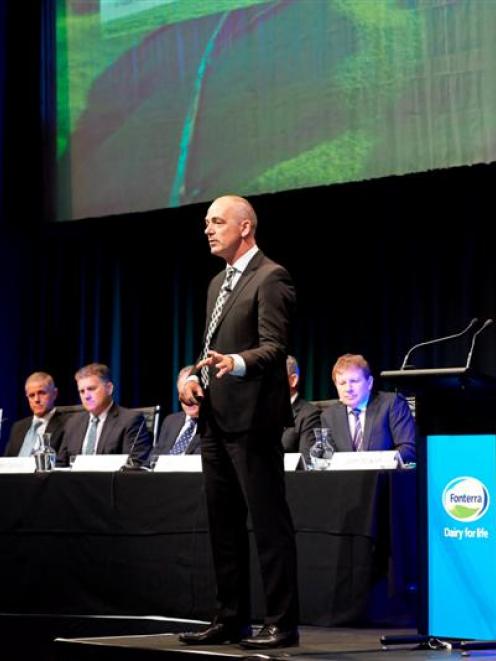 Addressing the co-operative's annual meeting at its Edendale site in Southland yesterday, Mr Spierings said the botulism scare earlier this year had been an ''enormous elephant in the room'' and it was still in the room for some. Coming out of the crisis was an excellent opportunity to lift the game, he said.

Acknowledging that Fonterra's response in the first 72 hours in New Zealand to the fiasco could have ''definitely been better'', the co-operative was in the rebuild phase in the market.

It was in a good space with local authorities and ''quite a good space'' with customers, but the most difficult part was consumers.

In China, there was 84% awareness of the Fonterra name - but that also meant 84% of people knew what happened and only 40% knew it was a ''false positive''.

When it came to lifting the game in sustainability, Mr Spierings said he was not talking about farmers, but about sustainability in the chain - ''end to end'' - from farm to customers.

Chairman John Wilson said 2013 had been a year of promise, of challenges, which had tested the resilience of farmer shareholders, the business and the strength of the co-operative, and of progress. For himself and the board, a crucial measure was how they came out from those challenges.

There was continued demand from customers, significant support for its brand and relationships around the world were very strong. It had also received strong support from farmers.

The contamination scare had been a test for the governance of the co-operative. The board initiated an independent inquiry to find out what happened and reduce the chance of it happening again.

While the report was hard-hitting, importantly it found that Fonterra did most things extremely well, he said.

It was important to acknowledge that it was a ''false positive'', but the reality was the co-operative ''did not join the dots''. It was an incredibly complex situation and lessons had been learnt.

The report from the inquiry pointed to areas where Fonterra could and must do better and it must exceed its own high expectations, Mr Wilson said.

Food safety and security and quality assurance must be top of mind for everyone, from farmers to the board and to New Zealanders.

Demand for food was growing and along with that were customer and consumer expectations about food quality and safety.

Sustainability started on the farm with farmers showing care for how they managed their use of natural resources. Many farmers continued to invest heavily in significant sustainability projects.

Sustainability and social responsibility would underpin Fonterra's strategy at every level, he said.

Referring to the past year, Mr Spierings said widespread drought, particularly in the North Island, had affected Fonterra ''big time'', in terms of volume and value, and affected farmers even more.

The co-operative's balance sheet was very strong and Trading Among Farmers had given an opportunity to support farmers to get through that ''really difficult time''.

Mr Wilson said while volatility could move the payout to farmers up or down, the 2014 season seemed likely to deliver a record high payout.

The current forecasted farm milk price was $8.30/kg ms, along with an estimated dividend of 32c, amounting to a forecast payout of $8.62 for a fully shared-up farmer. That would be reviewed again at the December board meeting.

Regional councils nationwide were being charged by the Government with implementing the National Policy Statement for Freshwater Management.

It was appropriate that industry worked together to ensure any decisions made at regulatory level were made with solid evidence and balanced viewpoints, not emotion, he said.

Several hundred people attended the annual meeting which was held in a large distribution store, appropriately surrounded by bags of milk powder.

It was good to be in the South and holding the meeting at the oldest and largest Fonterra site, Mr Wilson said.