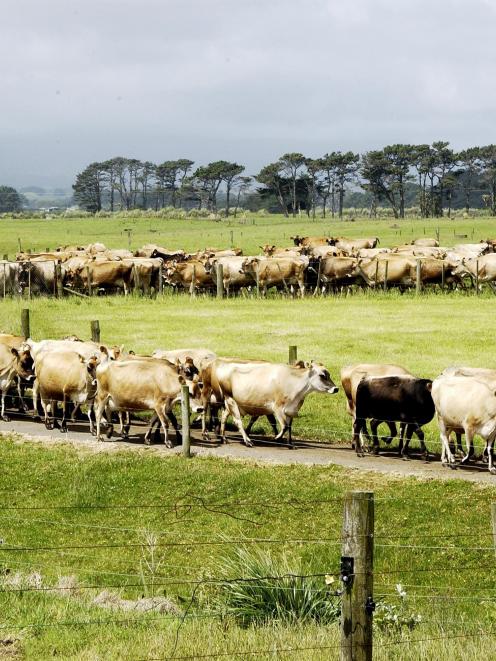 Dairy farmers' Fonterra shares could provide them with a windfall. Photo from DairyNZ.
Fonterra's release yesterday of a final price on its listed shareholder units could provide debt-laden or drought-affected dairy farmers with a cash windfall.

Before the units began trading, the last price farmers could purchase them for was $4.52, while the units listed in late-November at $5.50 on the stock exchange and traded yesterday around $8.

Fonterra yesterday announced the final price of $7.92 for each share the farmer shareholders can sell, based on the daily average price between May 2 and 15.

They could sell up to 25% of their shares and it was likely Fonterra would be a large buyer. Fonterra had raised more than $500 million during issue of units in the Fonterra shareholder fund.

''For some farmers, this may be a way to rebalance the farm's balance sheet,'' he said.

Mr Easton highlighted that yesterday's final figure provided ''pricing clarity'' for farmers which could now ''entice'' more to participate in selling units. The extra cash to farmers could be put towards paying off historical debt, but for some dairy farmers, an injection of cash could offset the decline in production caused by the recent drought, Mr Easton said.

He said farmer shareholders had another week, until next Thursday, to confirm if they would participate in the supply offer.

Sales could be scaled back, depending on the number on sale.

Prices of dairy products extended their decline from a record high as a resurgent US dollar weighed more generally on commodity prices and concerns abated about the impact of drought in the North Island, APNZ reported yesterday.

The GDT-TWI price index fell 2.1%, compared to the last online auction sale two weeks ago, in only the second decline this year. The average winning price fell to $US4549 a tonne from $US4597 a tonne. The total volume of dairy products sold at the latest auction was 17,637 tonnes, up from 17,237 tonnes two weeks ago.

Sales of Anchor milk rose more than 10% since Fonterra launched its controversial light-proof bottles five weeks ago, boosting the brand's market share from 13% to 14%. About 200 million litres of milk is sold annually in supermarkets.