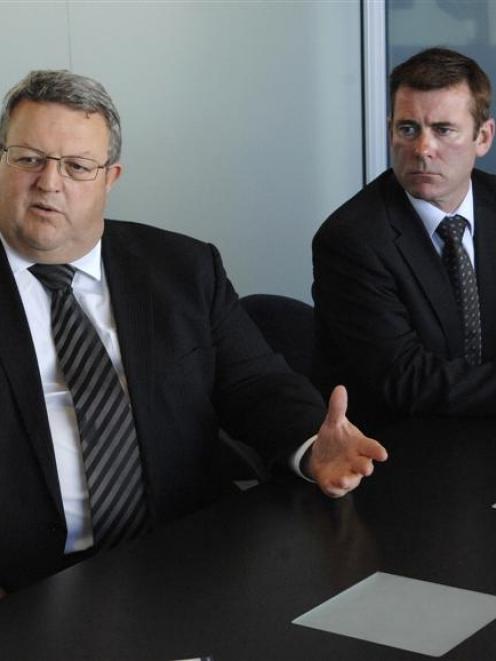 Minister of Energy and Resources Gerry Brownlee (left), seated beside Dunedin North list MP Michael Woodhouse, says the Government is being "cautious" with the recommendations it is to make in its mineral stocktake report. Photo by Linda Robertson.
The Government remains tight-lipped on the contents of its wide-ranging "stocktake" mineral report - likely to be one of the more contentious environmental issues this year - which is due to be released by the end of the month.

Minister of Energy and Resources Gerry Brownlee was in Dunedin yesterday, touring the Forsyth Barr Stadium and meeting the Chamber of Commerce and the Otago Southland Employers Association while Parliament is in recess.

The minerals review, which could see protection removed from 7% of conservation land under schedule 4 of the Crown Minerals Act, was announced in Otago last August.

Environmentalists and the Green Party have been highly critical of the move.

Mr Brownlee said the Government remained "cautious" in its approach to recommendations it will make in the stocktake, saying it had no intention of threatening the larger tourism sector or the environment.

He understood the report would be out by the end of the month.

"We're not looking to replace one sector with another," Mr Brownlee said in an interview.

The Government was "setting the regulatory environment" for increasing exploration in general.

He said the small percentage of land already being mined in New Zealand could be enlarged without threatening other areas, "and even if that was doubled, it's a very small land use".

Mr Brownlee would not be drawn on speculation the Government was "softening" its initial suggestions because of environmental opposition, and could give no further indication of the report's contents as it was still before the Cabinet.