Milk drier makes 924 tons of powder in a week 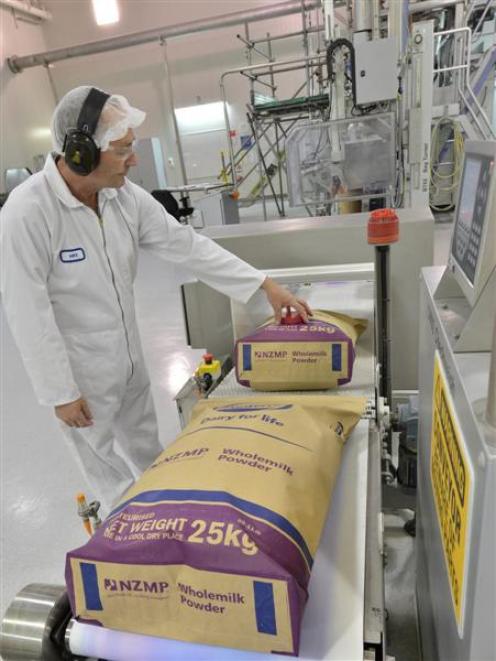 A Fonterra Studholme plant worker watches bags of milk powder roll off the line. Photo by Fonterra.
Fonterra's newly-acquired milk-processing plant at Studholme, near Waimate, has already broken a record - producing 924 metric tonnes of whole milk powder in a week.

In September, Fonterra gained Commerce Commission clearance to buy the plant, which had been placed in receivership in May. It previously traded as New Zealand Dairies Ltd.

During the record week, the drier operated 24 hours a day with no downtime. It was testament to the hard work of the 45 staff at the plant, site manager Alan Maitland said.

This comes down to teamwork, skill and the meticulous planning prior to commencing production this season."

The five-year-old plant is on a 55ha site and has a production capacity of 30,000 metric tonnes per season. It produces standard whole milk powder for sale on the GlobalDairyTrade platform.

In the latest ASB commodities weekly, Prof William Bailey, from the department of agriculture at Western Illinois University, said the high point of the New Zealand production season was said to be history, with output slightly below last year's at this time.

The long slow decline in production towards June-July might be affected by reports of current pasture conditions not being as good as in the recent past, he said.