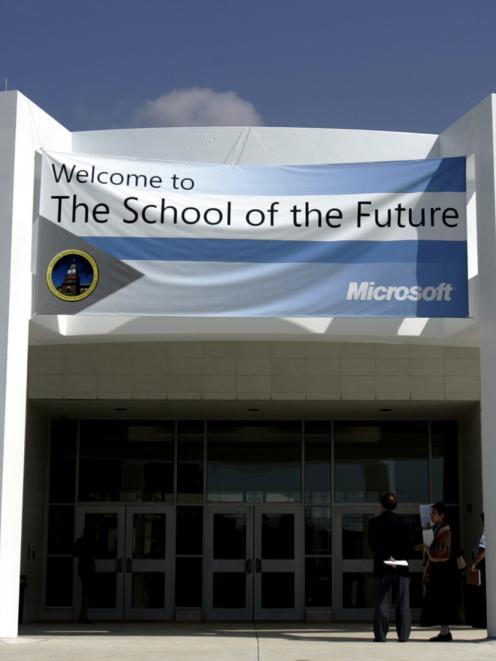 An exterior view of the "School of the Future" in Philadelphia, taken soon after it opened in 2006. Supplied photo.
When the Microsoft-designed School of the Future opened, the facility was a paragon of contemporary architecture, with a green roof, light-filled corridors and the latest classroom technology, all housed in a dazzling white modern building.

It might as well have been a fishbowl. Educators and the media from around the world watched to see whether Microsoft could reform public education through innovation in technology.

Although the US school's creative ambitions have been frustrated by high principal turnover, curriculum tensions and a student body unfamiliar with laptop computer culture, the school graduates its first senior class this week - with every graduate headed for an institution of higher learning.

"The first three years were definitely a challenge," said Mary Cullinane, Microsoft's liaison to the school. "They're hitting their groove now. I'm excited to see what's in store."

From the beginning, everything about the $US63 million ($NZ88.9 million) School of the Future was designed to be different.

The vision was for a paperless, textbook-less school that embodied the motto "Continuous, Relevant, Adaptive".

Each learner would get a take-home laptop on which to keep notes, do homework and take tests.

But students were chosen by a lottery of public school students. Most were from low-income families and without home computers, yet they were expected to manage their high school careers on a laptop.

"I felt kind of awkward," said senior Kenneth Bolds, 17. "I was used to using books and pencils for eight years."

Educators also assumed learners would enter the school performing at grade level, but half the students in the academically-troubled district were not proficient at reading or math.

Cullinane notes that the school can't control who comes into the school, but said test scores don't tell the whole story.

"It is a long-term journey, and we have to get away from short-term yardsticks," she said.

The project-based curriculum also caused problems, because it did not translate to district benchmarks.

Its interdisciplinary nature made it hard to tell what material had been taught, said Nancy Hopkins-Evans, special assistant to the district's chief academic officer.

"Our issue was that you had content and standards that you absolutely needed to cover," Hopkins-Evans said.

Report cards, too, were incompatible with the district's needs. The narrative assessments rated students from "Advanced" to "Not on the Radar" instead of giving letter grades.

And the idea to replicate a professional work day by using a 9am to 4pm schedule had to be altered; some students needed the traditional school day.

All the while, there were tours, tours, tours. More than 3000 people from 50 countries have visited the school so far.

"It was a lot to process at the time," she said.

Jan Biros, a vice-provost at nearby Drexel University who served on the school's original curriculum planning committee, wrote in a report last year that the group overlooked the school's place in the larger district.

"We were not naive - but our assumptions were essentially flawed," Biros wrote.

Principal Rosalind Chivis - the school's fourth - described the building's journey as "trying to build a plane while flying it".

Yet now, she said, a revamped curriculum, steady leadership and better use of resources and scheduling had yielded the "first full year of uninterrupted education".

Teacher Aruna Arjunan said part of the school's strength lay in offering a combination of academic, technical and real-world skills.

Students' familiarity with Microsoft programs make them employable straight out of high school, she said.

They were also evaluated on "competencies" that Seattle-based Microsoft uses with its own employees, such as dealing with ambiguity and thinking on the fly.

"There are kids in this building who would have flunked out of other high schools," Arjunan said. "I just think the culture here is unlike any other."

All 118 seniors have been accepted to post-secondary programmes, from community colleges to selective schools like Villanova University.

Some, like Wearing-Gooden, weren't even considering college as freshmen.

This fall, Wearing-Gooden will be studying climatology on a scholarship at Green Mountain College in Vermont. She said the School of the Future offered individual attention, a supportive atmosphere and a familial dynamic that helped her realise her potential.

"It showed me that the world is not as stable as we want it to be," she said. "Now I'm ready for anything."