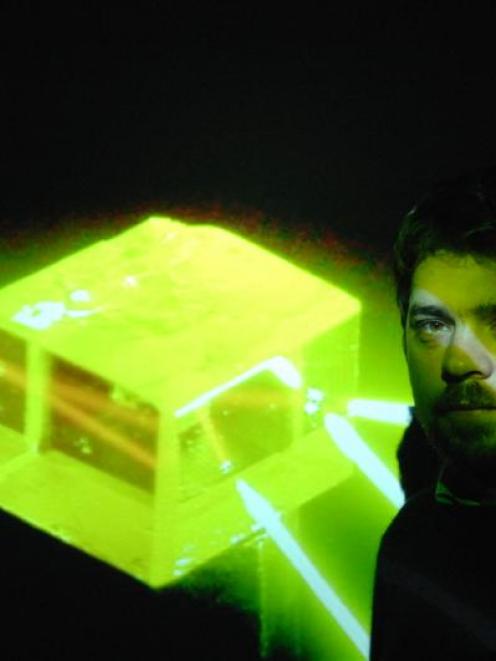 University of Otago physicist Dr Jevon Longdell considers an image showing a silicate crystal, magnified about 100-fold. The transparent crystal contains atoms of the rare metal europium, which are excited by a laser beam, and are used to store light. Photo by Linda Robertson.
University of Otago physicist Dr Jevon Longdell is part of an international scientific team which has just developed the most efficient quantum memory for light in the world.

This breakthrough brings closer a future of super-fast quantum computers and ultra-secure communications.

The findings of the Australian National University-led team, of which Dr Longdell is a member, are published this week as the cover article of Nature, the world's foremost scientific journal.

"I'm very proud of our achievements," he said of the team's work.

"It's a significant step towards a quantum computer."

The researchers used a technique they had pioneered to stop and control light from a laser, manipulating electrons in a crystal cooled to -270degC - about 3degC above absolute zero .

The system allows the delicate quantum nature of the light to be stored, manipulated, and recalled, with unprecedented efficiency and accuracy.

Light entering the crystal, which is dosed with rare earth ion impurities, is slowed to a stop, and remains there until released again.

It remained unclear when a powerful quantum computer using this technology could eventually be developed.

But the latest research showed that using "ion-doped crystals" was a "very promising" approach to such memory-related work.

Dr Longdell, who is a member of Otago University's Jack Dodd Centre for Quantum Technology, said "new physics and new technology" emerging from the research was being actively pursued at the Otago centre.

New applications could result, including better ways to undertake biomedical imaging, through the "optical detection of ultrasound".

The Australian team is led by Dr Matthew Sellars of ANU, and his ANU colleague Morgan Hedges is lead author of the Nature article