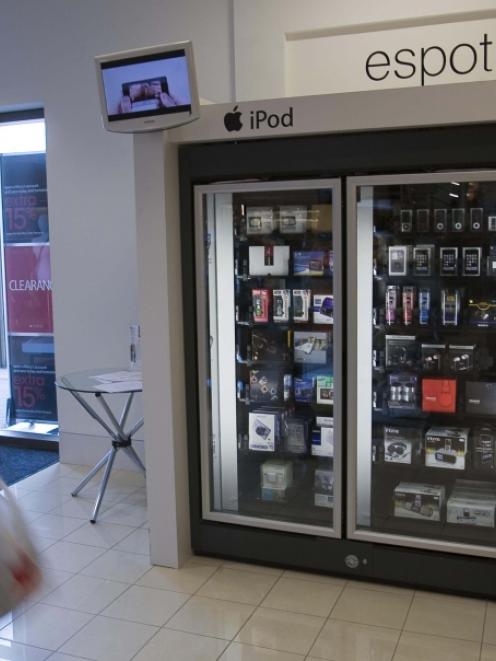 A customer walks past an e-Spot at the Macy's store in Town Centre Plaza in Leawood, Kansas. The chain's automated electronics kiosks are now in 398 stores and contain items including pocket video cameras, compact mobile TVs, digital cameras, GPS devices, iPods and eBook readers. Photo by MCT.
Press your face up to this vending machine, and savour the selections. With some items costing $US400 ($NZ570), chances are you won't have the change in your pocket. But not to worry - credit cards are accepted.

"They are a value-added service," said Daniel Butler, senior vice president of retail operations for the National Retail Federation. "You can access them quicker and easier, and you don't have to have the exact change."

These upscale product dispensers are popping up all over the place - department and specialty stores, airports, subways, and even grocery stores.

Retailers save on overhead since the machines fit into small spaces and don't have to be manned by an employee.

The machines, which cost thousands of dollars, are now a small part of the industry, generating about $1 billion in revenue, or about 10 percent of the total business, according to research analysts.

Macy's, for example, got out of the electronics business years ago. But in 2006, it began testing e-Spot, automated retail shops selling digital cameras, headphones and other items.

Two years later, Macy's started rolling out the machines to more than half of its stores.

With just a swipe of your credit card you can purchase products such as a $19.99 flash drive or a $399.99 iPod. There also are Kodak PlaySport pocket video cameras, Garmin GPS systems, Sony eBook readers and more.

If unhappy with the purchase, the items can be returned by mail within 30 days.

"E-Spots have been received very well by our customers," said Macy's spokeswoman Andrea Schwartz. "It's a very simple, fast and easy way of shopping."

But once they saw the products, they whipped out Ng's cell phone and looked up more information on one of the iPods.

A satisfactory experience? "If you know what you want, maybe," Furlong said. "I would want to be able to touch the product first and talk to a clerk about it."

Ng agreed: "It's kind of impersonal."

But sometimes consumers don't have time for the personal touch.

That's where items like those in the Baby Station Vend could come in handy. Innovative Vending Solutions in Dayton, Ohio, plans to install one of the country's first baby product vending machines at Kansas City International Airport in the next few weeks.

It will dole out baby products for parents on the run - diapers, pacifiers, bottles, wipes, formula. The company also sells branded merchandise like T-shirts at themed restaurants.

"They're something new and still at that ground-floor phase," said Jeff Thibodeau, vice president of Innovative Vending Solutions. "But they are great marketing tools and the next phase of internet retailing - instant gratification."

Sephora has put its cosmetics and body products in several airport vending machines. Macy's also sells Proactiv acne skin care products in machines in a limited number of its stores.

Redbox has been giving Blockbuster a run with its touch-screen movie rental kiosks at more than 21,600 locations including McDonald's, grocery stores, convenience marts and drug stores.

Best Buy Express, a vending machine kiosk that stocks cell phones and computer accessories, digital cameras, headphones and travel adapters, among other gadgets, was named one of five "hot retailers" at the International Council of Shopping Centres convention in Las Vegas May 25.

Best Buy's partner in the venture is Zoom Systems, a San Francisco-based vending machine company. The concept was rolled out in 2008 in some major US airports, and now also is in Canada, Europe and China.

Coca-Cola has parked its interactive machines that allow consumers to purchase about 100 of its drink brands, including Diet Coke, Fanta and Minute Maid, in some upscale shopping malls.

When the United States Navy wanted ideas on how to staff its retail shops round the clock, Butler of the National Retail Federation suggested vending machines, even for packaged uniforms.

Still, many consumers want one-on-one time with a sales clerk rather than the self-service route.

The machines also have to be accessible but in a secure place, so someone might not be tempted to drive off with the whole thing like they occasionally attempt with ATM machines.

Items with expiration dates - batteries, food, publications - have to be maintained regularly, and the machines need to be well-stocked for visual appeal. Customers also need an option if the product isn't vended.