Scooters off streets in Dunedin 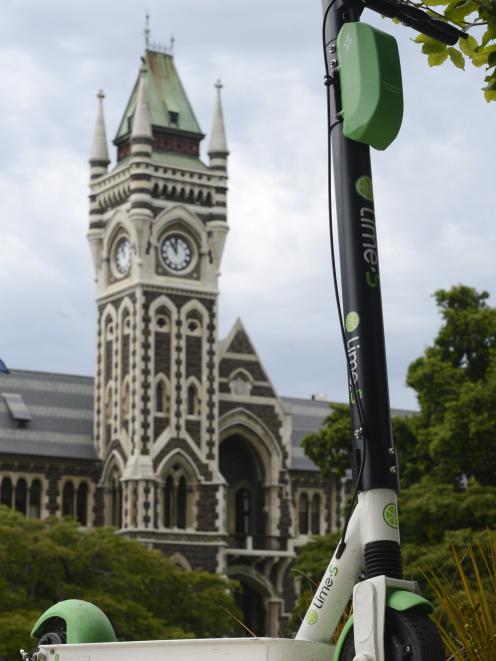 Lime scooters will not be on Dunedin streets. PHOTO: GERARD O'BRIEN
The Dunedin City Council says Lime is "doing the right thing'' by pulling its e-scooters from Dunedin streets.

The council confirmed late yesterday Lime would temporarily withdraw its e-scooters from Dunedin streets, beginning last night, as well as other parts of the country.

Mr McNeill had confirmed he would follow Auckland's lead by withdrawing the devices from Dunedin streets as well, until safety issues could be resolved.

The withdrawal of the scooters was expected to begin in Dunedin last night, Mr Pickford said.

The company did not have a licence with the DCC, but had volunteered to take that step here, "which was good to hear'', Mr Pickford said.

The company's representatives had met Auckland Council officials earlier yesterday, and disclosed 155 "irregular braking'' incidents - 92 of them in Auckland - which had caused injuries to 30 riders.

As a result, Lime's licence for Auckland operations had been temporarily suspended until it could satisfy the council the devices were safe.

That included providing more information on the frequency of unexpected locking problems, and allowing a specialist consultant, Exponent, to assess and confirm improvements, including a firmware upgrade designed to fix the fault, had worked.

"Lime has agreed to these conditions and, once we are in receipt of this information, we will make a further decision on whether Lime's licence suspension will be lifted,'' the council said.

Lime's regional general manager, Anthony Fleo, last night, in a statement, said there had been 12 reported incidents in Dunedin affected by a wheel-locking issue. Three had resulted in injury.

"We have been in touch with each customer to offer our support.''

"While it's unfortunate the city council has requested we pause operations to gather additional information, we remain confident in the safety of our service.''

Mr Pickford said the scooters would be able to return to Dunedin streets only once the Auckland Council was satisfied they were safe.

Mr Pickford said it had been "good to see'' the popularity of the alternative form of transport in Dunedin, which showed no sign of tailing off, but safety had to come first.

The company seemed to have been "a bit slow'' in responding to the safety issue, and the council had asked it to be "more proactive'' in dealing with any similar issues in future.

Automobile Association Otago council chairman Malcolm Budd said it supported the council's decision to remove the scooters until a bylaw was introduced which could make them safer for other road users and pedestrians.

So the hysterical screaming from the cotton wool crowd have got their way.
How many scooters have run red lights, how many have knocked people over?, it's always the scooters fault, never the operators, yeah right.

It had to happen really. It's a shame though because now Lime has given the whole idea of electric scooters a rather tainted image. A properly run scheme with safeguards for riders and other road users, and of course, safe scooters, could finally bring this great idea to fruition. Maybe a fresh start with a different company will manage to pull it off, but next time consider the pavements off limits.

Yes introduce a "bye-law" which says "Bye-bye Lime until you can make your mode of transport safe and useful in winter and summer and in all work conditions like carting groceries and young children."