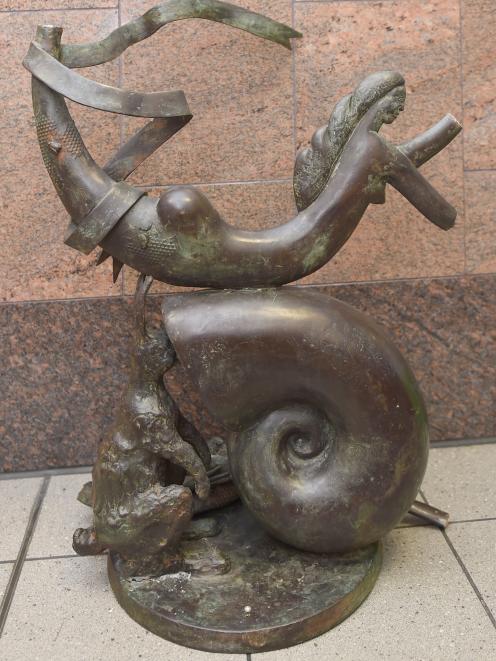 The damaged sculpture. PHOTO: ODT FILES
A man who smashed a sculpture in the police station then went on "a little rampage", attacking a bus and spitting at police, has been jailed for four months.

But with his time on remand taken into consideration, Andrew Kataina'Marii (42) will be released imminently.

He appeared in the Dunedin District Court yesterday after pleading guilty to three counts of disorderly behaviour, one of assaulting police and one of wilful damage.

On August 17, Kataina'Marii went to the Dunedin Central police station where he became frustrated for an unknown reason.

He directed his anger at an artwork bolted to a plinth in the foyer.

A police summary referred to it as "an expensive brass sculpture" that was gifted on the opening of the premises but they had been unable to determine how much it was actually worth by yesterday's hearing.

Kataina'Marii had no means of paying for the damage in any event, the court heard.

Two days later, the defendant went to a shop in Princes St to buy cigarettes.

When he was told they did not sell the brand he wanted, he flew into a rage, "puffed his chest and clenched his fists".

Kataina'Marii pulled items off the shelves while verbally abusing the staff member who had served him.

The mini-spree continued as he left the store.

Kataina'Marii yelled abuse at members of the public as he walked south.

At the Go Bus Transport depot, the agitated defendant interfered with diesel pumps until confronted.

Again, Kataina'Marii took up an aggressive stance, puffing out his chest at the victim, who then walked away and called police.

The defendant left the scene only after kicking a bus several times.

Across the road, he continued to lash out.

Police found him punching and kicking a building.

At the station - where he had damaged the sculpture two days earlier - he spat three times at a female officer.

The saliva ended up on her trousers, body armour and face, the court heard.

And Kataina'Marii followed it up with a racist comment before he was placed in a cell.

"It's no understatement to say he has had a huge amount of resources poured into him to try and prevent him coming back to court," he said.

Judge Christopher Harding noted Kataina'Marii had a complex history of mental-health issues exacerbated by substance abuse and his lack of engagement with treatment.

Six months' release conditions were imposed on the defendant so Corrections could have some oversight.

"I urge you to accept the help offered to you," the judge said.

Well Judge Christopher Harding needs to look for a new job. ' I urge you to accept the help offered to you," the judge said.' Force the person to get help if they don't lock them up. This is why the world is like it is,