8 Comments
National is promising a temporary "massive" tax cuts which it says will put $3000 in the back pocket of middle New Zealanders.

If elected, the party would lift the bottom, middle and top tax thresholds in a bid to "let Kiwis keep more of what they earn".

The overall size of National's plan is $10 billion over five years and will be paid for by using the unallocated portion of the Government's Covid-19 fund and by spending less money than a Labour Government would over the same period.

But National has walked back its previous promise to get Government debt down to 30 per cent of GDP by 2030 – today revealing that target was "not practical or feasible".

"Today, we are facing the biggest economic downturn that world has seen in living memory," National leader Judith Collins said.

"To keep our economy ticking, New Zealanders need money to spend."
That spending, according to the party's policy, will be largely driven by temporary tax cuts.

But these tax cuts are only temporary, coming into effect on December 1 this year and expiring on March 31, 2022.

Collins said the policy would put about $3000 a year, some $50 a week, to middle-income earners.

Last week, Labour promised that it would create a new tax bracket – 39 per cent for those earning $180,000 a year. 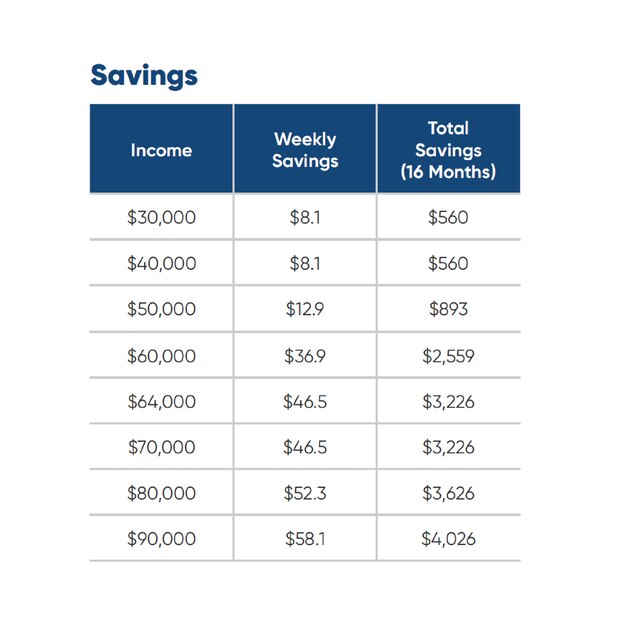 What National says Kiwis will save under its tax plan. Photo: National
But Collins said this morning that no country has ever taxed its way out of a recession – "and this is a big one we're in now".

National estimates the tax cut policy would cost $4.7 billion over that 16 months period.

The party has also announced a policy which would, according to finance spokesman Paul Goldsmith, get businesses "spending like crazy".

That plan includes doubling the deprecation rate for businesses which spend money on a new plan, more equipment and any new machinery over the next year.

This brings forward the amount a businesses is able to claim in deprecation for new investments – it is expected to cost $1.7 billion over five years.
Meanwhile, National has promised it would not cut any Government spending on health, education or social development, while keeping a $10.2 billion spending buffer over the next four years to deal with "any future cost pressures".

National has been criticized by Labour in the past over its plans for spending.

Finance spokesman Grant Robertson said that National was caught in a "Bermuda Triangle" were it wants to increase spending, reduce revenue and cut debt all at the same time.

"You can't do all of those things at once – I think their plan is lost somewhere in that triangle."

National did concede today that its plan to reduce Government debt to 30 per cent of GDP by 2030 was not realistic.

It is now targeting 35 per cent of GDP by 2034 – its billions of dollars more in wiggle room.

But National's debt payment plan still has the party paying back and extra $74 billion by 2034 than the current plan.

National has also forecast that, if it's in Government, it would have the books back into surplus by 2027.

Under the Pre-Election Economic and Fiscal Update (Prefu) released yesterday, the Government would continue to be in deficit until at least 2034.

And although it has promised to spend $4 billion of the Covid-19 contingency fund on its temporary tax cut plans, it has also promise it would not spend $5 billion of the so far unallocated $14 billion.

This, according to Goldsmith, would help the party pay down debt quicker.

So according to the above table a salary of $30,000 will get an extra $8 a week, and a $90,000 salary will get an extra $58 a week. Isn't that just the rich getting even richer and the middle class basically getting nothing, I mean seriously, $8 a week is a joke. This is what trump has been doing in America so that puts me right off voting National at all.

This personal income tax policy is nothing but an attempt to buy votes (surprise surprise). It probably looks attractive to their base, but I suspect no one else.

The real policy I want to see is the one where National reduces company taxes under the guise of boosting economic growth. The problem with that policy though is that the claimed trickle down effect doesn't go beyond shareholders and company executives to any meaningful degree.

Also watch out for the policy where reduction to government assistance can now be justified on the basis of greater personal income from reduced personal and company income tax.

Thick, we are not.

National's strategy: Open the borders to the virus before lunch and give the Covd 19 recovery money to ourselves and our rich mates.
National is the party of the murderous robber barons, if you're not part of the top 1% they don't care about your health, they just want your money.

Sounds sensible to me. Helping low income people is better than punishing super-high income people (>$180k). It would be better if the current top bracket ($70k) wasn't shifted up. However a case could be made that extra cash with these people will boost non-essential expenditures (like flat whites at your local cafe) that would support some jobs. The same argument (essentially) has been made by Grant Robertson for keeping lowering offical cash rates even though this policy inevitably favours people with assets and causes wealth inequality to go up.

Having said all of that, Jacinda is a highly intelligent, committed and competent politician and deserves the second term.

Oh, wait, what's this? A blatant shout out to the National base, those on way more than the average working class wage. For the majority, not so much.

Judith Collins is facing an historic defeat of epic proportion and the best she can do is cut taxes for her base. Colour me surprised- Judith you're on a hiding to nothing.