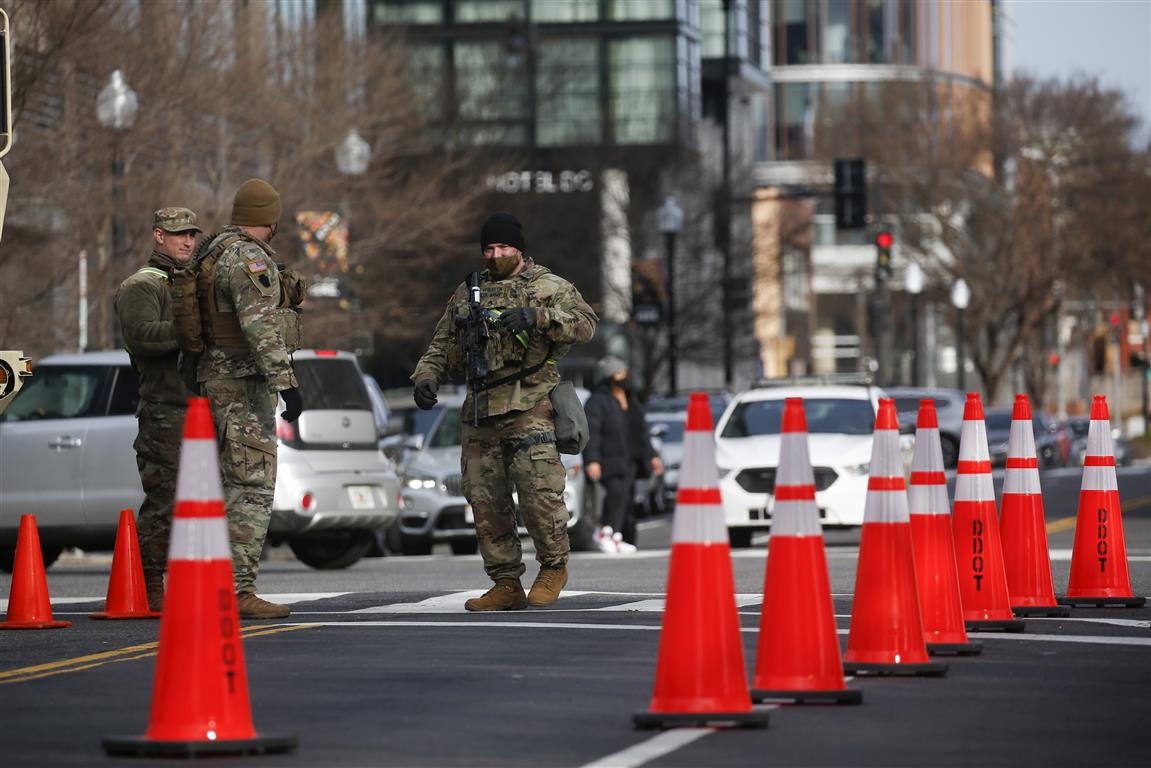 Members of the National Guard secure the area near the Capitol in case of protests ahead of US President-elect Joe Biden's inauguration, in Washington. Photo: Reuters
Ten days after rioters breached the US Capitol in a deadly attack that stunned the world, cities nationwide were girding for a potential new wave of violent protests over the weekend, erecting barriers and deploying thousands of National Guard troops.

The FBI warned police agencies of possible armed demonstrations outside all 50 state capitol buildings starting on Saturday through to President-elect Joe Biden's inauguration on January 20, fuelled by supporters of President Donald Trump who believe his false claims of electoral fraud.

Michigan, Virginia, Wisconsin, Pennsylvania and Washington were among states that activated their National Guards to strengthen security.

In downtown Washington, which is locked down ahead of the inauguration, officers arrested a Virginia man who presented an "unauthorized inauguration credential" at a Capitol Police checkpoint on Friday evening and was found to have a loaded handgun and more than 500 rounds of ammunition, according to court papers.

The man, identified as Wesley Allen Beeler, was driving a pickup truck with several firearm-related bumper stickers, including one that read, "If they come for your guns Give 'Em your bullets first," the court papers said. He was scheduled to appear in court on Saturday. His court-appointed lawyer could not immediately be reached for comment.

Responding to news of the arrest, Democratic US Representative Don Beyer of Virginia said the danger was real and the city was on edge.

"Anyone who can avoid the area around the Capitol and Mall this week should do so," Beyer wrote on Twitter.

The nationwide security scramble followed the deadly Jan. 6 attack on the US Capitol in Washington by a mix of extremists and Trump supporters, some of whom planned to kidnap members of Congress and called for the death of Vice President Mike Pence as he presided over the certification of Biden's victory in November's election.

The Democratic leaders of four US congressional committees said on Saturday they had opened a review of the events and had written to the FBI and other intelligence and security agencies to find out what was known about threats, whether the information was shared and whether foreign influence played any role.

"This still-emerging story is one of astounding bravery by some US Capitol Police and other officers; of staggering treachery by violent criminals; and of apparent and high-level failures — in particular, with respect to intelligence and security preparedness," said the letter.

There were scattered demonstrations on Saturday, but statehouses remained mostly quiet. Law enforcement officials have trained much of their focus on Sunday, when the anti-government "boogaloo" movement made plans weeks ago to hold rallies in all 50 states.

In Michigan, a fence was erected around the Capitol in Lansing, and troopers were mobilized from across the state to bolster security. The legislature cancelled meetings next week, citing concern over credible threats.

The perception that the Jan. 6 insurrection was a success could embolden domestic extremists motivated by anti-government, racial and partisan grievances, spurring them to further violence, according to a government intelligence bulletin dated Wednesday first reported by Yahoo News.

The Joint Intelligence Bulletin, produced by the FBI, Department of Homeland Security and National Counterterrorism Center, further warned that "false narratives" about electoral fraud would serve as an ongoing catalyst for extremist groups.

Thousands of armed National Guard troops were in the streets in Washington in an unprecedented show of force after the assault on the US Capitol. Bridges into the city were to be closed, along with dozens of roadways. The National Mall and other iconic US landmarks were blocked off into next week.

Experts say that the capitals of battleground states such as Wisconsin, Michigan, Pennsylvania and Arizona are among those at most risk of violence. But even states not seen as likely flashpoints are taking precautions.

Illinois Governor J.B. Pritzker said on Friday that while his state had not received any specific threats, he was beefing up security around the Capitol in Springfield, including adding about 250 state National Guard troops.

The alarm extended beyond legislatures. The United Church of Christ, a Protestant denomination of more than 4,900 churches, warned its 800,000 members there were reports "liberal" churches could be attacked in the coming week.

Suzanne Spaulding, a former undersecretary for the Department of Homeland Security, said authorities disclosing enhanced security measures can be an effective deterrent.

"One of the ways you can potentially de-escalate a problem is with a strong security posture," said Spaulding, now a senior adviser at the Center for Strategic and International Studies. "You try to deter people from trying anything."

Following the Jan. 6 violence in Washington, some militia members said they would not attend a long-planned pro-gun demonstration in Virginia, where authorities were worried about the risk of violence as multiple groups converged on the state capital, Richmond.

Others told the Washington Post they wanted the protest organized in response to new state gun rules to be peaceful. Some militias across the country have told followers to stay home this weekend, citing the increased security or the risk that the planned events were law enforcement traps.

I find it very interesting that the Biden Inaugural is a lot Like Baghdad: there are Green Zones, Red Zones, armed Military Checkpoints to Enter and Leave the Downtown D.C. area and all Bridges Into City will be closed. I cant help but wonderthat If Biden Needs All This To Protect his Inauguration from the People, Maybe the People Didn’t really Elect him!

Domestic terrorism is the answer? You wonder who's really American at such times.

Nothing says democracy quite like the requirement of 20,000 troops to install a new regime!