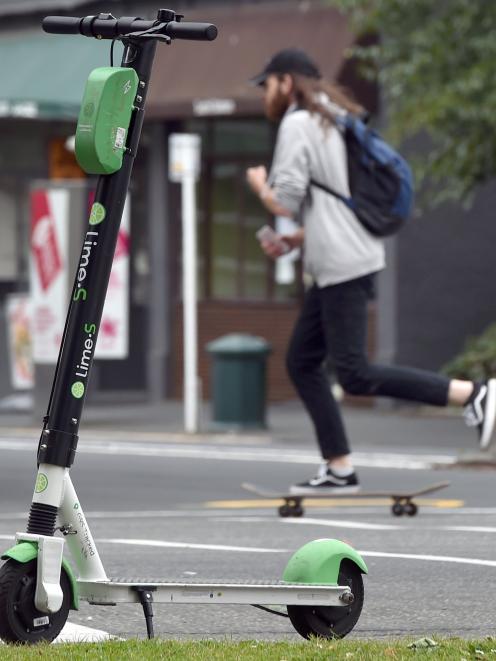 E-scooter providers in Dunedin could soon be charged 13c per ride by the Dunedin City Council. PHOTO: PETER MCINTOSH
All-day parking in Dunedin looks set to increase by 17%.

E-scooter operators will also have to pay up, with the Dunedin City Council requiring 13c per ride if new fees and charges are introduced.

A draft operating budget for the 2021-22 year to be discussed by the council this week proposes increases at the all-day Railway North, St Andrew St and Thomas Burns car parks from $6 to $7, alongside increases for all-day parks in the outer areas of the city.

The council was forecasting a loss of $258,000 in its parking operations in the next financial year due to the sale of the Dowling St car park.

Leased off-street car park fees could also be increased by between 2.7% and 3.6%

Councillors will also consider a recommendation to increase parking enforcement fees by up to 3.7%.

For e-scooter operators, fees of 13c per ride and an annual administration fee of $500 were proposed.

These aligned with fees in other territorial authorities of similar size and would recover costs including administration, data reporting, stakeholder engagement, compliance, monitoring and use of public space, the report said.

New e-scooter company Neuron will launch in the city next week, providing some competition for Lime, which is at present the sole operator.

If signed off, the proposed increases will be included in the draft 2021-31 10-year plan to be consulted on in March.

If adopted, the changes will come into effect on July 1.

Dunedin, we need to push for a vote of no confidence in this Mayor and his followers. A rates rise of 10%, electricity increase of c10%, parking increase of 17% - to cover the cost of the revenue loss in parking they continue to remove.

This is a joke.

Have you been to Christchurch recently - new roads, central city development including car park buildings, housing subdivisions and not a green mayor in sight.

The Chch work has had very little to do with councils of any sort and their financial management , or their political and/or environmental leanings . It has very much to do with a series of disasters , insurance money and tax payer bailouts .

So the DCC gets rid of the Dowelling street carpark and then is asking the public to pay for the loss of parking revenue by charging more at other parks? Electricity line charge increases, is Aurora still expected paying DCC holdings a dividend?... parking cost increases and an estimated 60% rate increase over ten years.... what are you doing DCC? Not all of us can ride bicycles everywhere.

What a bunch of incompetent people attempting to run the show, first of all the DCC wanted nothing to do with lime scooters, now they want a cut per ride, sorry DCC that should have been sorted in a contract with the provider and locked in for 5 years along with a price of per ride, this is just another Tax on the already suffering Dunedin people, Shame on you Start at the top Hawkins to go then Managers, CEO time for Dunedin people to protest.

There is no such thing as a free lunch.

Common sense? Based on what? It’s hard enough to find a car park in town, let alone having to pay more when you finally find a park. This is yet another tax on vehicle owners.

When I make a poor decision business I stand by it and suck up the consequences. I do not pass the buck. Why does the Dunedin City Council believe it is OK to do the opposite?

Because there is no scrutiny of their actions. Apart from us of course and we don't count. I still have no reply to my question last week to Ms. Graham about how fixed income households are to find the money for all the increases so I'm betting her thick skin is a higher priority to her than being good at figures. Watch out the dead, this council will have the pennies off your eyes in a thrice.