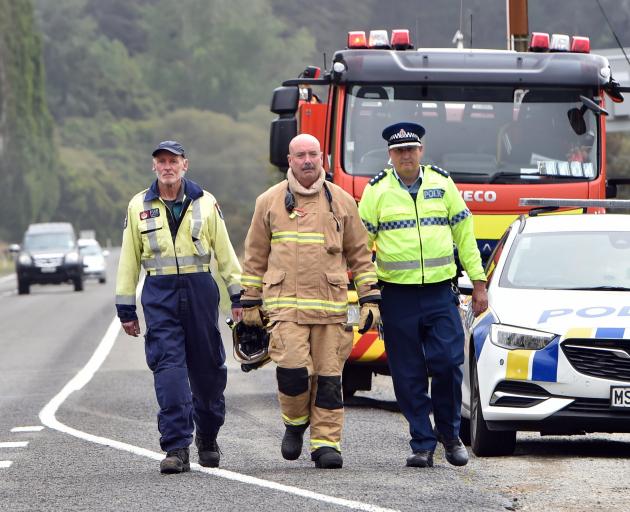 Waitati firefighter Andy Beecroft, senior firefighter Craig Meade, and Inspector Craig Brown are urging motorists to drive safely after a spree of crashes. Photo: Peter McIntosh
Waitati's volunteer firefighters have attended the same number of crashes in the past two months as they did all of last year, sparking a plea for motorists to take care.

Police say the stretch of State Highway 1 between Waitati and Dunedin is the worst high risk road in the Southern police district.

There have been seven crashes there since early January, the same number attended by the Waitati Volunteer Fire Brigade in all of 2020. 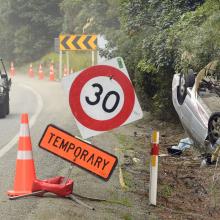 A car that rolled on State Highway 1 between Dunedin and Waitati last week was one of several crashes attended by first responders recently. Photo: Stephen Jaquiery
Senior firefighter Craig Meade called it a significant jump.

Speed, distraction, impairment, and lack of seatbelts were all factors in the crashes and their outcomes, which ranged from moderate to severe injuries.

"There’s never really one single thing. It takes two or three to add up before they leave the road."

The nature of the landscape in the area meant that if cars went off the road, they either ended up over a drop- off or hitting an embankment.

"Half the vehicles we go to are laying on their roofs, and that can be quite bad news for anyone inside."

Firefighters often saw people exceeding the 100kmh speed limit, which was even more dangerous in an area that was often affected by fog, and in the winter months, by ice on the road.

The increasing number of crashes took a toll on volunteers, he said.

That ranged from arriving at a crash scene to see something "crumpled to the degree where you can’t identify what kind vehicle it is", to the frequent calls away from their day jobs or in the middle of the night.

Inspector Craig Brown, of Dunedin, said southern police had a list of high-risk roads in their patch, based on the incidence of serious crashes.

SH1 between Waitati and Dunedin was the riskiest, followed by the Crown Range.

The level of traffic on the road contributed to that, but there were also issues around driver behaviour and the conditions.

Police were patrolling the stretch of road every day, he said.

Time to reconsider the wartime proposal for a tunnel, tho now not so much for railway (as then) but for roadway?

Then it was seen as a Sawyers Bay proposal; now it might be a
Normanby one