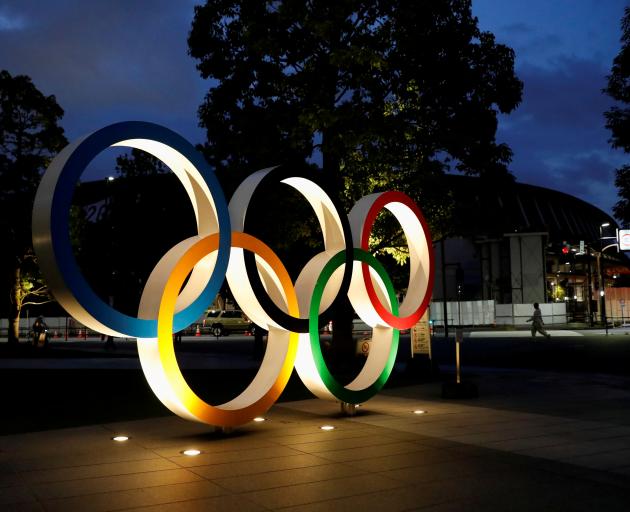 The Olympic Rings monument outside the Japan Olympic Committee headquarters in Tokyo. Photo: Reuters
New Zealand's Olympic heroes have come under fire after allegedly behaving badly on a flight back home - with reports of excessive drinking, and used face masks being thrown at the flight crew.

The first charter flight from Japan touched down in Christchurch on Monday, carrying members of the victorious Black Ferns Sevens and the All Blacks Sevens teams, as well as swimmers, trampolinists, skeet shooters and surfers.

But the journey has been described as a "party bus" with a witness describing drunken antics and calling athletes' behaviour "appalling".

"They drank excessively and were out of control the entire journey," a witness told Stuff.

At one point during the flight, a pilot approached the athletes - said to be drunk - to speak to them about their behaviour, the witness said.

The witness described athletes dancing in the aisles, singing loudly and playing music.

They also claimed that some athletes removed their masks and threw them at members of the flight crew.

It is understood no complaints had been received by the airline that brought the team home - Air New Zealand.

An investigation has been launched across the Tasman after Japan Airlines sent a written complaint to the Australian Olympic Committee after inappropriate behaviour on a flight to Sydney.

The AOC has confirmed to local media that it was aware of what was described as unacceptable behaviour from members of the rugby and football codes on the flight from Japan last Monday, July 30.

AOC head Matt Carroll told 7 News although there were multiple sports athletes on board, the rugby and football teams had taken full responsibility.

"While there has been no formal complaint from the airline, unacceptable behaviour was brought to our attention and I directly raised the issue with our member sports CEOs," he said.

"It's extremely disappointing, but both rugby and football [officials] have told me that such behaviour is certainly not acceptable within their sports and have sincerely apologised to the Australian Olympic team."

They're going into quarantine.
An overreaction.