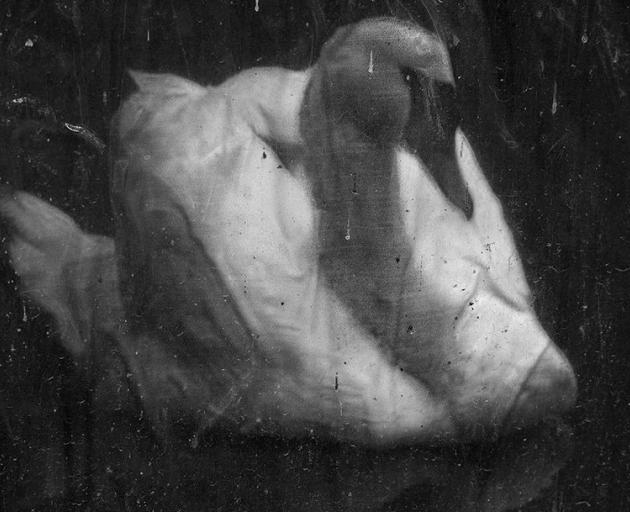 The four monochrome works are animal studies, with each creature photographed through a streaked pane of glass. The results are impressive, and are as much studies of mood as they are studies of the animals themselves. Focus has been used creatively, with much of the images shifting and blurring as if it is only a half-captured thought of an animal that has been photographed. In the case of Enclosure XII (Baboon) this has led to a strong painterliness, the character of the primate emerging from the paper as if essayed in a few deft strokes. Similarly, the impressive To Die in Music (Swan) has as much the feel of a soft-focus charcoal drawing as it does a photograph.

The two coloured works could not be more different. These pieces place liminal spaces is sharp focus, with emphasis on mood created through colour. Both scenes are strikingly composed, with the picture area divided vertically in two. The bold colour and enigmatic objects in To Never Find a Day (Interior) are particularly striking. 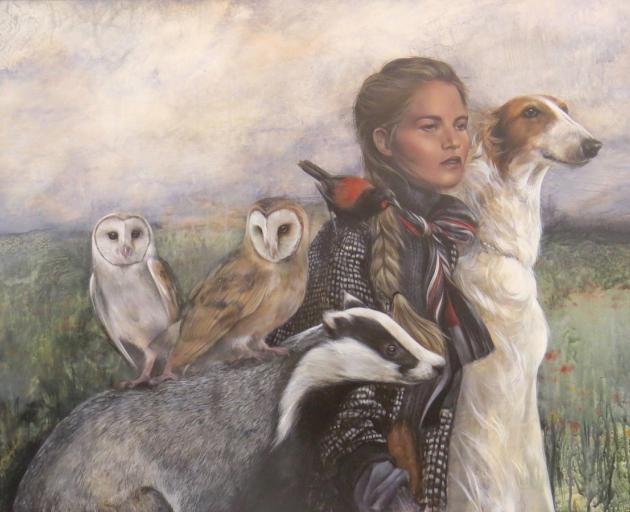 A joint exhibition at The Artist’s Room pairs the magic realism and animal studies of Gemma Campbell with still lifes by Jonelle Murray.

Campbell’s paintings are softly toned group portraits’ predominantly featuring one person surrounded by a group of animals. The effect is evocative and wistful, and there is a strong feeling of narrative within works such as Good Company and Dog Day. Alongside these images, Campbell presents a series of inked drypoint plates, each beautifully etched and presented as a one-off metallic "print". Each of these plates is a portrait of a single animal and the attention to fine detail is clear.

Murray’s still lifes and solitary portrait sit well along side Campbell’s images. Both artists work their paints on aluminium surfaces, allowing the paintings to glow with an inner intensity, but whereas Campbell uses this to create a sense of air and light, with Murray the images shine with rich, almost translucent colour. The rich blue and green glass of The Promise and Ocean Views, in which blue glass sits with finely captured lustrous paua, produce a calming, contemplative feel. In contrast, the strongly atmospheric dark tones of Searching for Scarlet imbue the image with an intense emotional resonance. 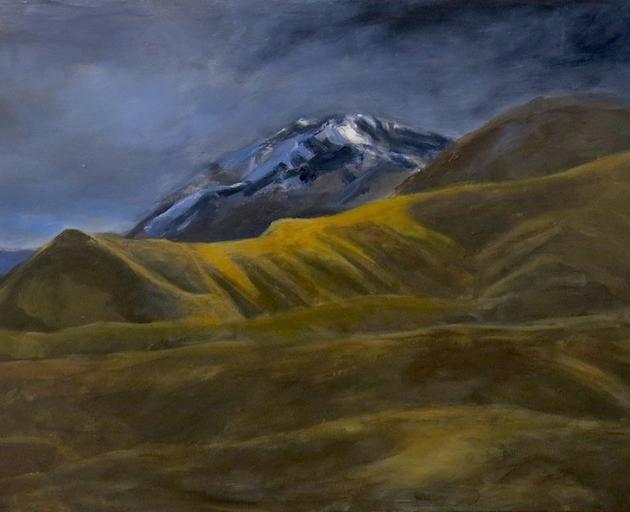 At the End of the Day, by Pauline Bellamy

Pauline Bellamy has returned from her annual winter retreat to St Bathans with a series of strong images of the rugged Central Otago terrain.

The works, which encompass both acrylics and oils, are distinctly portraits rather than landscapes, emphasising the ancient character and inner soul of the land.

Bellamy’s palette is deliberately reduced for these paintings.

In part, that is simply the nature of the inland Otago winter, with frost white, clay ochre, and tussock brown dominating the hibernal land. The choice of this limited colour set is important in other ways, however, as it allows the artist and viewer to focus completely on the bones of the land, the tectonic structure of the country becoming a major feature of the works. This comes to the fore in images such as June 2020 II and the odd but effective symmetry of Mt Dunstan.

The land depicted in these works is hard but beautiful in its winter coat, and for the most part overwhelmingly empty. Only occasionally, where the green peeps from beneath the snow — such as in the dramatic At the End of the Day — is there a sense that the land retains its warm heart even in the depths of the cold.