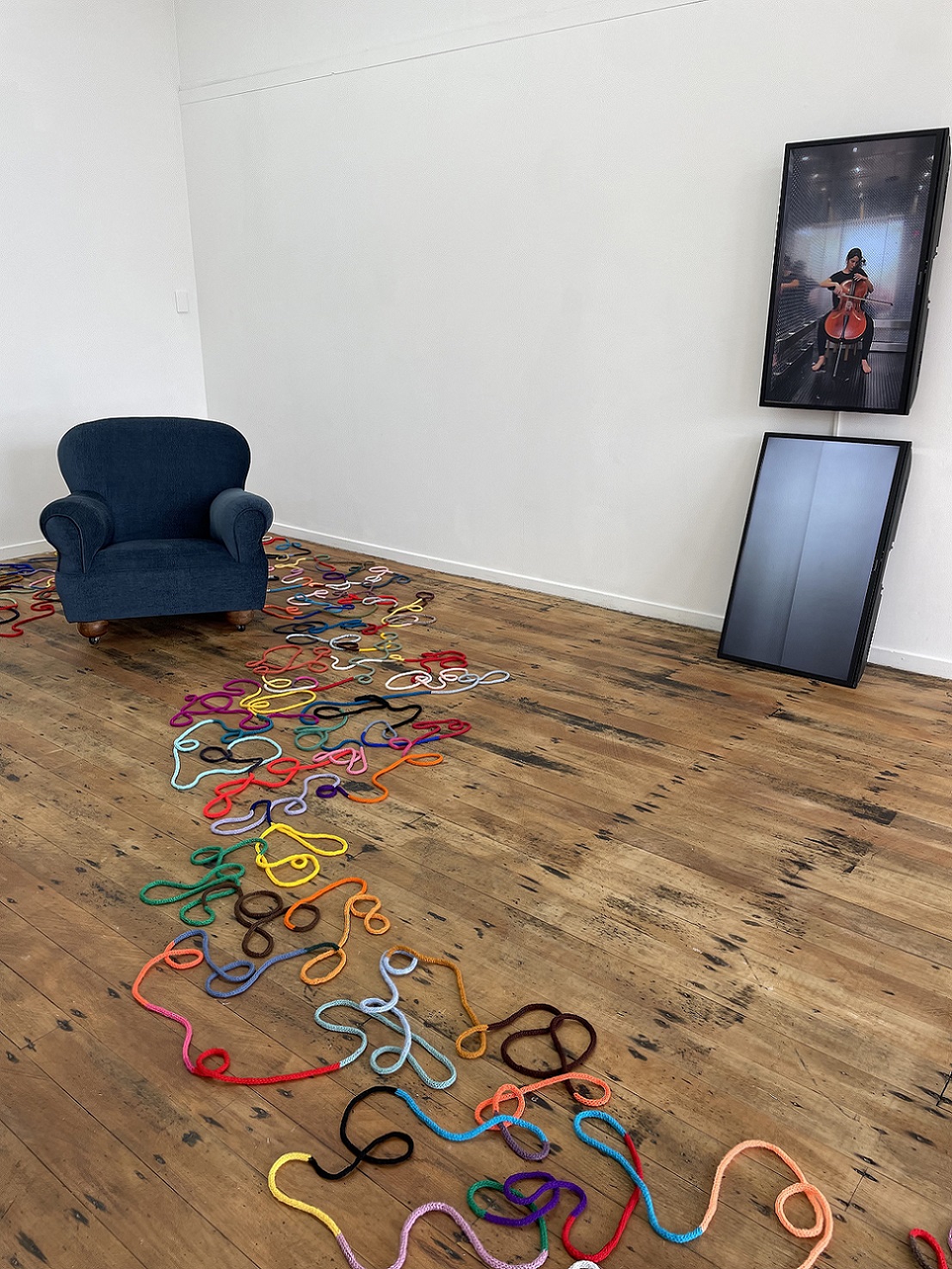 Layers of conversation and collaboration inform ‘‘Idle Hands’’ at Blue Oyster. An exhibition developed in conversation by Hope Wilson and Bree Richards, ‘‘Idle Hands’’ presents the work of three practitioners: Argentinian-born, New York-based artist Dulce Lamarca, Australian artist Kate Mitchell, and Waiwhetu-based, Pakeha artist Zoe Thompson-Moore. As the exhibition title suggests, and as Thompson-Moore’s impressively long and colourful floor-based trail of French knitting or "Rat’s tail" most strikingly embodies, this is an exhibition that brings to light the dynamics of rest, play, and labour in the making of artworks. Each differently coloured length of Thompson-Moore’s knitted work Pissing While (2022) indicates a day’s work. In discussion with the artist, friend and writer Mary Walker provides an insight — via the exhibition text — into the collapsed boundaries of art making while raising young children, as both Thompson-Moore and Walker do. Instead of striving to carve out stretches of uninterrupted time, the two practitioners make work alongside, or even with, everyday, quotidian activities. This blending of activity recalls Joanna Margaret Paul’s similar dissolution of "art" and "life".

Collectively the three artists examine the imperative of uncritical production, time pressures, and what it means to contribute objects to consumerist capitalism. Mitchell literally hangs on to the hour hand of a clock as it winds its way around the face (In Time, 2015), while both Thompson-Moore and Lamarca incorporate an object of rest: a childhood chair and hammock respectively. Come rest awhile. 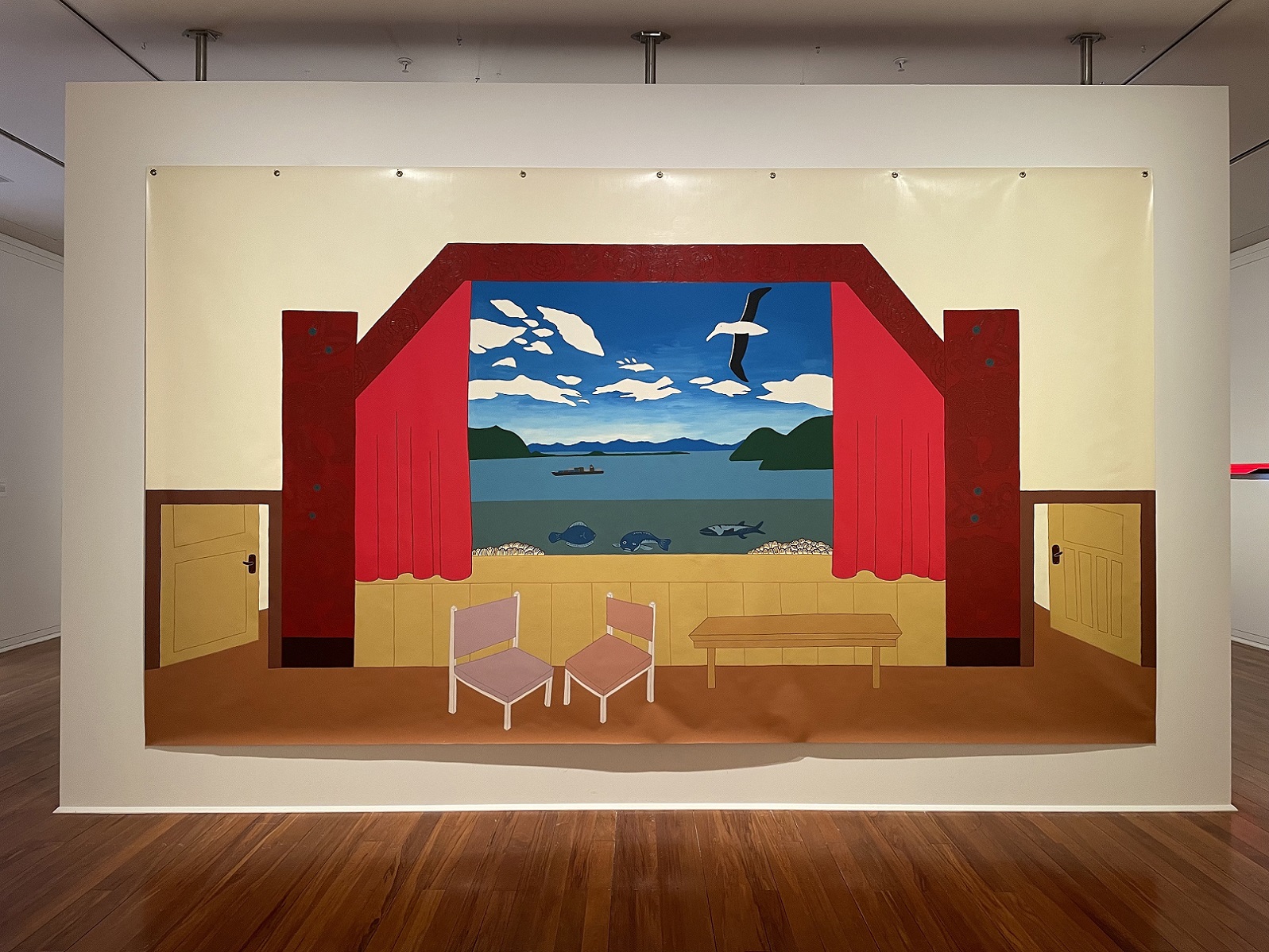 Occupying the entire first floor of the Dunedin Public Art Gallery, the scale, complexity, and interconnected themes of ‘‘Paemanu: Tauraka Toi’’ — an exhibition by Kai Tahu artists — invites ongoing engagement. This is particularly so in the case of Kai Tahu, Ngati Kahungunu artist Ayesha Green, as new works have been added since the opening in December 2021. Located at the very end of the exhibition on the right-hand side, a temporary wall serves to spatially invoke the inside of a whare. On the "enclosed" side of this wall, Green’s large-scale painting of a stage inside the wharenui at Otakou mimetically places the manuhiri (visitor) before red curtains that open out on to non-human ancestors (sky, clouds, mountains, ocean, fish). To this portrayal of ancestors, titled Inside Tamatea (2021), Green has added many portraits of mana whenua (Tupuna Portraits, 2022). Over time, portraits from three runaka (tribal councils) from Otakou, Moeraki and Puketeraki will warm the walls near the wharenui.

The addition of these portraits and the significance of "likeness" to memorialise, remember, and pay respect to tupuna prompted me to re-engage with the work of Kiri Jarden (Kai Tahu) positioned on the other side of the temporary wall. Housed in individual Perspex enclosures, each one contains a small figurative sculpture made from clay and local pigments. As if echoing Jarden’s aspiration, the wall text asks, "Is that you, Ema? Did I capture your likeness?" Interestingly, the artist does not confer likeness; she asks. 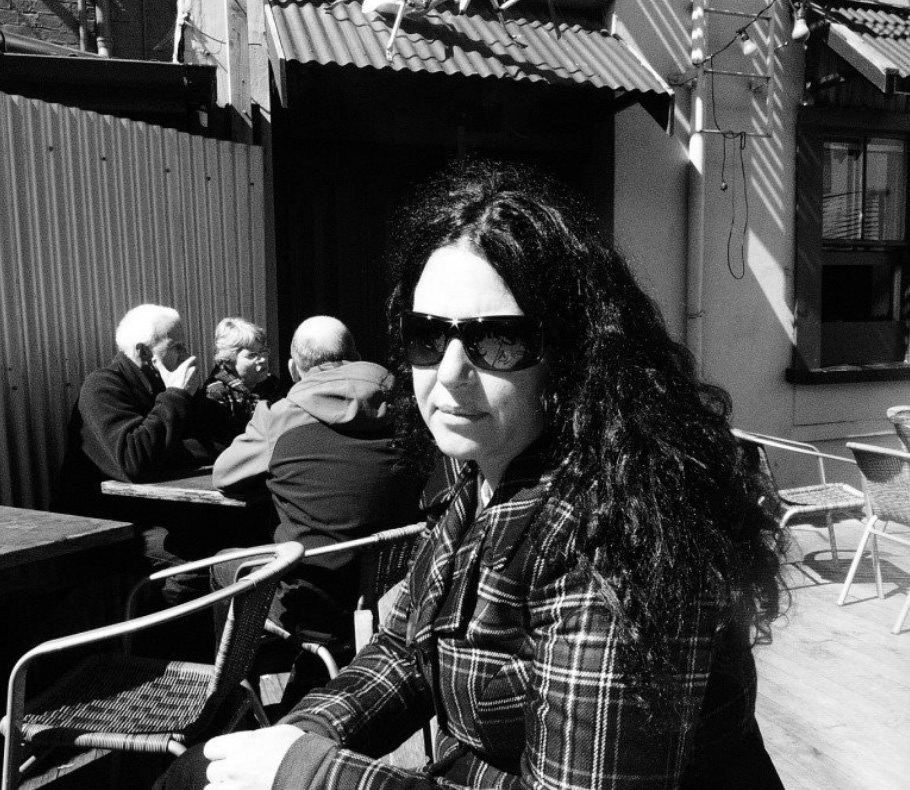 Lenihan’s intervention is auditory, while Dunedin Pride’s celebration (facilitated by Trak Grey and Max Wolfgram) is visual. To combat the sounds of cars and the song of introduced birds (and the weighty history and ongoing oppression they signify), Lenihan has recorded the calls of native manu (birds) from the town belt, which sound at intervals along George Street from ata hapara (dawn) to mapouriki (dusk).

This intervention is intended by Lenihan to function as a re-indigenisation of public space and perhaps as a sonic reimagination of how we could inhabit space differently — with greater inclusivity and compassion. Lenihan’s mahi (work) is titled, Tu atu, tu mai — he karaka manu ki ka manuhiri, which describes a call and response between beings, mediated in this instance by manu (birds).

Importantly, the call of manu is not only intended to fall on human ears but to invite embodied manu back into the urban centre.

Imagining it is mapouriki (dusk) with the air full of native bird song (kereru, korimako, tui, piwakawaka), the darkening sky is suddenly illuminated by a rainbow aurora — a type of queer southern lights in which the colours of the Pride rainbow flicker, transmute, and reappear. Temporarily illuminating the night sky, The Rainbow Aurora (2022) welcomes and celebrates the lives of queer people and allies.