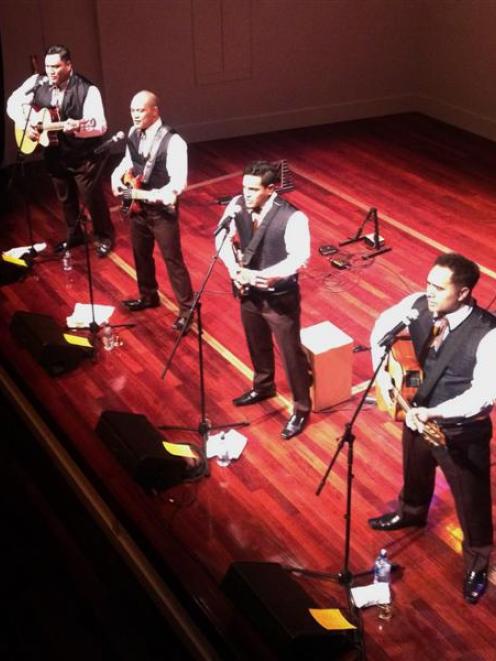 Modern Maori Quartet members (from left) Maaka Pohatu, Francis Kora, Matariki Whatarau and James Tito perform Ten Guitars in the Glenroy Auditorium at Arts Festival Dunedin on Saturday. Photo by Shawn McAvinue.
We are in the thick of Arts Festival Dunedin and the first three nights have had audiences stamping on floors demanding encores and guffawing with uncontrolled laughter.

On Friday and Saturday night, the Circa acrobats performed Beyond in Regent Theatre.

As a double-jointed female acrobat twirled and descended to the sounds of a woman singing a stripped-down ukulele version of Radiohead's Fake Plastic Trees, a man wearing an oversize rabbit head sat on the corner of the stage, watching.

The performance was beautifully surreal, like watching a mix of Donnie Darko and Tomb Raider. Outstanding.

The performance dared the audience to unleash its inner animal and acrobat Rudi Mineur carried five fellow performers off stage at the same time. A display of animalistic strength beyond human.

After the show I asked Mineur, if given a choice, what animal he would be reincarnated as. A wedge-tailed eagle, he replied. Acrobat Kat O'Keefe said she would be an orangutan.

I don't know myself, but Beyond was so good it made me want to howl at the moon.

The comedic highlight was when the acrobats, standing in a line and staring blankly at the audience, tried to contain their inner animals. A man in the audience guffawed as the acrobats' bodies succumbed to impulse and they licked other people's faces or clucked like chickens.

Audience member Mac Daddy, of Wanaka, described Beyond as ''mind-blowing''. His friend, Holly Officer, said the playfulness was inspirational.

Then it was a dash across the Octagon to the Glenroy Auditorium to catch the end of the Modern Maori Quartet show. Although the performers were singing Slipping Away by Max Merritt and the Meteors, it was clear the audience were in the palms of their hands.

When the almost two-hour show was over, the crowd called out for more, stamping their feet and whistling.

Former Dunedin resident Maaka Pohatu led his bandmates back on stage with a broad smile.

''I told you my hometown was mean,'' Pohatu told them before starting the encore.

He told me on Thursday, the band planned to ''smash it'' in Dunedin, and smash it they did. They were so good I saw them on Saturday night, too.

''We came out full force,'' Pohatu told me after their Saturday performance.

The quartet would perform in Dunedin in the future, he said.

Student Hope Henry, of Christchurch, said the quartet made her feel nostalgic, especially its rendition of the Carpenters' song Superstar.

''They play the songs Dad used to play me.''

Kate McKinlay, of Dunedin, said the quartet were beautiful singers and ''nice eye candy'' too.

The quartet noticeably made the women gasp and swoon.

Talking to Serbian cast members of Sisters In Arms after their New Zealand premiere at the Fortune Theatre on Friday, accordionist Jugoslav Hadzic told me he was surprised how much older the audience was in Dunedin, compared with Belgrade audiences.

Sisters in Arms starts with a loud Serbian rock song and he could see shock on the faces of the audience as he gave the squeezebox his all.

I told Hadzic that when I heard him play I thought of US rock duo the White Stripes. Hadzic said he had heard this comment many times.

On Saturday, I saw the start of Sonic Psalms at St Paul's Cathedral and the random jam by improvisational string group STRORK and Puspawarna, the University of Otago Gamelan, were a delightful descent into madness.

As a first-timer in the cathedral at night, I quickly learnt you should dress for colder temperatures.

I popped into the Coronation Hall for Songs From The South and listened to band Into The East. The music of Graeme Woller and Liv McBride has the ability to transport me to a scene from an early Quentin Tarantino film.

This week, I will be going to performances which are more difficult to pop in and out of, such as Nick: An Accidental Hero, Sisters in Arms and Moon At The Bottom of the Garden.

Word has it, the cast of Moon At The Bottom of the Garden are enjoying performing the play so much they are talking of taking it on tour across New Zealand and then internationally.

Three days of the festival down, seven to go. Bravo to everyone involved.