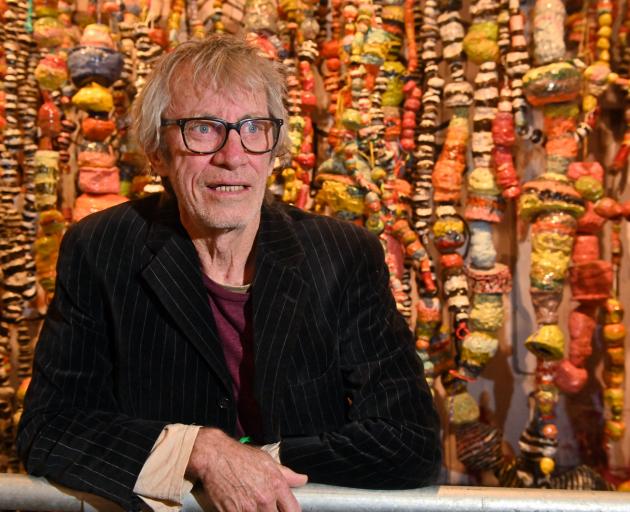 "I’m not one of those people to wake up and go ‘I’ll change everything’."

Instead, things seen and heard percolate, until through practice and error they start to come out in his work.

That is the case with his latest work, which is a change in direction for the award-winning artist known for his figurative and colourful ceramics.

"I tried everything to alter the figurative works. I think because I built those big figurative installations it was really difficult to [change]. I finished those almost before I started, it was so automatic.

"I started to build the figures upside down and ones on the floor. I’d done it. So I was looking for a change."

The change in direction can be traced back to when Cooper saw the leftover products of a pottery class stacked on top of each other in the corner of a studio while he was on residency at the Gudagergaard International Ceramics Research Centre, Skaelskor, in Denmark in 2016-17.

It was not until he was home that he began to experiment creating balls and shapes of different sizes and textures and then glazing them.

"It’s very curious. I started making simple forms and threading these up and suspending them. I was thinking of orthodox Catholic incense burners and Thai Buddhist pagodas."

Being in his studio meant he could hang the works in different combinations and try different things.

"There was no hurry to show it."

He has no idea how many pieces make up the work he calls NO. 9: work made in a number nine year.

"Some of the pieces have been fired again and again."

Cooper has used numerous glazes to finish the work.

Initially, the works were intended for the outside, but he soon realised they were too heavy. Instead, the multiple threads have been suspended from frames in an Otago Museum gallery.

"What is quite interesting about having them here is the lighting. It’s almost like there is a stillness here in the work, which is kind of extraordinary since it’s quite a busy, animated piece of work."

His trip to Denmark was part of his prize for winning the Portage Ceramic Awards, considered the best barometer for developments in New Zealand ceramics and judged by international judges. Cooper won the top award in 2009 and 2012 — for Millbrook Holiday, which was described as "bonkers" by the judge — and merit awards in 2016 and 2018.

In 1989, he completed his undergraduate studies in ceramics at the Otago Polytechnic School of Art, returning in 2000 to complete a master of fine arts degree. He spent time teaching at the polytechnic before dedicating himself to ceramics.

"You develop a language inside the kiln. You’re kind of setting up things constantly. There’s a language in glaze application, too. It’s learning to articulate that. It’s a really fascinating process."

Cooper is undecided on the future of ceramics, despite its growing popularity.

"It’s all those hipster kids jumping at the bit making pottery. I’m not quite sure at how its going to pan out long term. Whether it’s a retrospective look at ceramics they’re pulling from or they are bringing something completely new to the scenario."

If you look back at contemporary and post contemporary ceramic art there have been peaks and troughs of popularity in the fine arts world, he says.

"It’ll be interesting to see what has a longevity."