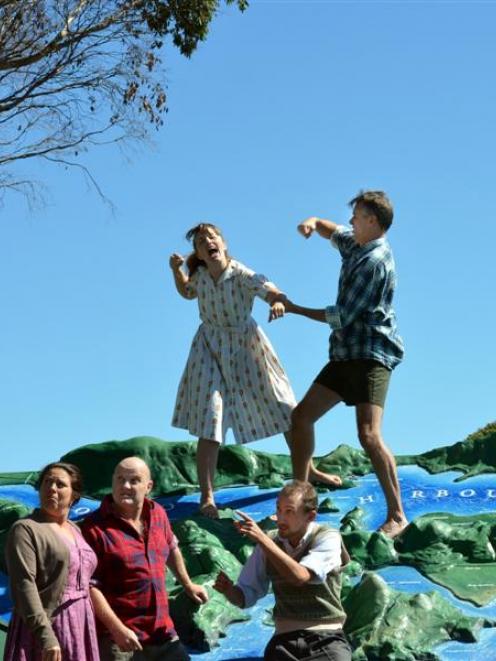 Mr McIntosh (Nick Dunbar, front right) explains the history of Duvauchelle Bay to Valerie and Jack (Julie Edwards and Phil Vaughan), while Ngaire and Michael (Rosella Hart and Andrew Laing) playfight. Photo be Stephen Jaquiery.
A nostalgic visit to 1960s rural New Zealand and the undercurrents that run beneath the surface are brought to life in the Fortune Theatre's new production of Peninsula. Charmian Smith talks to director Patrick Davies.

''Peninsula is the best New Zealand play written in the last 40 years! Gary Henderson's plays involve really amazingly New Zealand people; they are ordinary, they are brilliant, they are tragic, they are flawed, and his command of language, our pattern of speaking, is extraordinary. Not only are they beautiful to perform and the words just fall out of your mouth but they still have a lyrical, magical, theatrical kind of meaning,'' Davies rhapsodises. The play has had a hold on him for several years, and he has pestered artistic director Lara Macgregor to schedule it at the Fortune. Now it is finally in production, he is bubbling over with enthusiasm.

''This is the most evocative, magical, brilliant evocation of the New Zealand short story on stage. It's the simple story of the epiphany of a young kid becoming an adult, which is a major theme of a lot of New Zealand short stories ... Most of these stories do have this slightly tragic `Oh, I've lost my innocence' but when Michael loses his innocence he trades it for the opening of an imaginative and amazing vista of what the world could possibly be. You come out of the performance with this glad, warm hug of emotion,'' he gushes.

The play, a commission for the Christchurch Arts Festival in 2005, was written when Gary Henderson was living in the Robert Lord Writer's Cottage in Dunedin but has not been staged here until now, although it has had productions elsewhere.

Set in the early 1960s, it tells the story of 10-year-old Michael, who lives on rural Banks Peninsula and is neither good at rugby nor brainy.

But when a new teacher arrives, his passion for volcanoes is ignited.

He learns he lives on one and starts to map his community.

''He has a happy family. There are some issues in the play but it's not an `issue' play. We see a kid start to get excited about something and about a project and discover his own place in the world,'' Davies says.

''Then some things happen that might derail him. The lack of employment in the area affects his family greatly. There are a couple of scandals but at the end you know he's going to be OK. You don't know what's going to happen to him but he's learned enough through his experience to stand up.''

It is about the world of early 1960s rural New Zealand - building a hut, having a club, going fishing with your father, rough and tumble with the dog, chasing the girls and putting up your hand to be lunch monitor, he says.

''We recognise these kids and we also recognise the adults who go down to the pub for a few beers - it's six o'clock closing; the party at home where someone pulls out the guitar or piano and has a bit of a sing-along while the kids try to sneak a beer or two.''

There is also a sense of wonder as they watch Echo 1 and Echo 2, some of the first satellites, as pinpoints of light travelling across the night sky.

''It's slightly nostalgic. It reminds us of that golden time before technology took over our lives. All they have is a telephone and then it's a party line, the kind of thing where people find out because the operator's been listening in.''

The five actors each play two roles, adult and child or the family dog, and create a world that evokes the imaginative world of children where a stick or a box could be anything: the fort, the house, the time machine, the tunnel, the robot.

''It really enlivens an audience's imagination to watch the creation of a story. It is not on a set where you get told stuff through exposition and dialogue,'' Davies says.

But there is also a technical element in the show and the Fortune has joined forces with Myth, a Dunedin digital company, to create the effects and video feeds.

''You actually see people hurtling down a hill on a trolley. You see the lava from the middle of the earth grow out of the stage and cover one of the actors, in a nightmare.''

The volcanoes that formed Banks Peninsula are a metaphor for the play, he says.

''Beneath the calm exterior of the family, the people, the landscape, there's something always beating and boiling underneath. It's about those cracks and fissures that appear and the steam gets released. It doesn't always mean an absolute eruption, but it's just a reminder that underneath there's an amazing red heart.''

Davies, who says he is based in Dunedin because his mother is here, is an itinerant theatre practitioner, teaching, acting and directing around the country and the world with regular visits to Colorado, and has worked in Germany, Serbia, Romania, Dublin, Glasgow and London.

''I don't have a bed or wardrobe or desk any more. I have about 20 books and a pack's worth of clothes and a very ancient computer,'' he said.

The internet makes it easy to communicate and for the past three years, he has auditioned people or attended meetings on Skype, he says.

''It's always so much fun to come back to the Fortune. It's like home. I've done so much work here and it's so much fun to create something on this stage, especially Peninsula. It's a gold nugget,'' he enthuses.

• In Lunchtime Bites at 12.15pm on the ground floor of the Dunedin Public Library the cast will perform an excerpt from Peninsula, followed by afternoon tea.