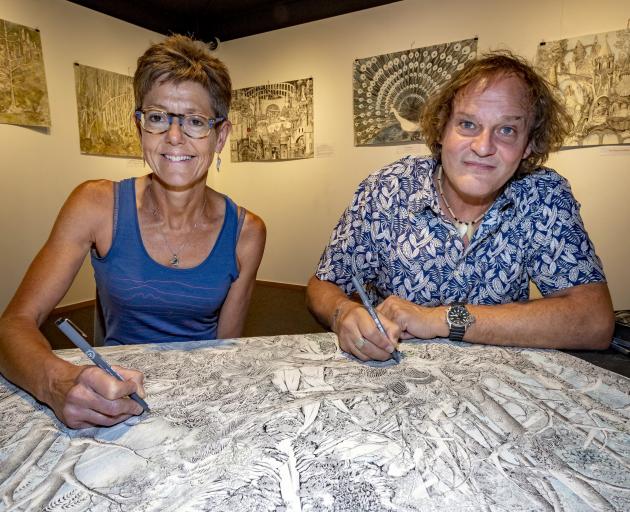 Kate and Luigi Agnelli sometimes have silly arguments over who did what in their graphic works.

‘‘We can’t remember who has done certain things, we have all these ridiculous arguments.’’

It is not so ridiculous when you see the detailed ink drawings the pair create together — often working on the same piece at the same time — using Pilot and Schedular pens with very fine (0.03mm-0.5 mm) nibs on cotton paper.

How they came to be creating these works together has all the elements of a romance novel.

Kate, an English archaeologist and architectural historian, had moved to Italy with her first husband after becoming fed up with England and looking for a lifestyle change. 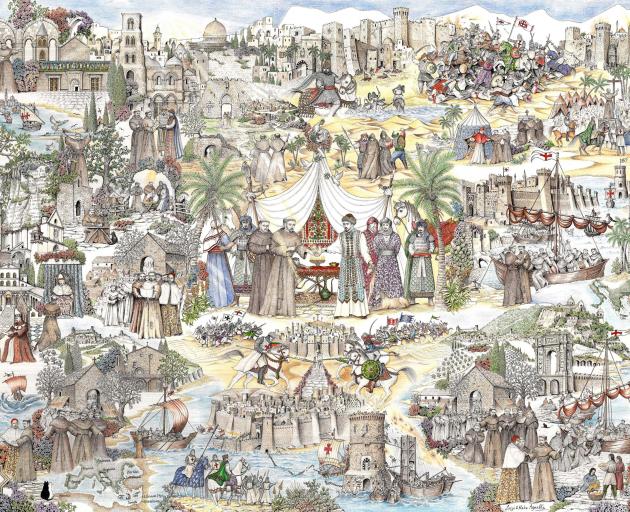 The work commissioned by the Franciscan Church, St Francis in the Holy Land.
When her marriage ended, she was looking for a new start and decided she would move to Arezzo in Tuscany, a town she had visited before and liked.

Two weeks later she met Luigi, a law-trained skipper, and everything clicked together.

‘‘It was fate. Something drew me there. It was one of those weird meetings that happen in life.’’

Agnelli had just stared to draw in his spare time and one day Kate doodled on the side of one of his drawings.

Neither of them have any art training but they soon found they could draw together and then decided to make it their job, although they do not see it that way. 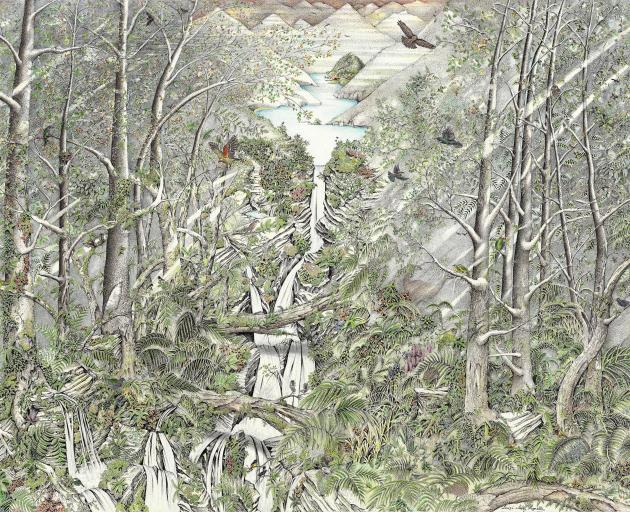 The New Zealand Forest inspired by Kate and Luigi’s first visit to Glenorchy.
‘‘It was like magic. I’d never been creative. For me it’s a miracle if you’d said to me 15 years ago you’re going to be doing this I’d have said you’re crazy.’’

Over the years they have developed a process which starts with ‘‘lots of random discussions’’ before they agree on what and how they will draw something.

‘‘It’s great teamwork we share. What the one can’t do the other can. We have a very special relationship for this to work. Not that we don’t argue, we do — he has a fiery Italian temperament while I’m more English reserved.

‘‘All our works we sign with a black-and-white cat, a sort of yin and yang. We’re so very different in terms of personality.’’

They then create a story or message which they go on to illustrate. Sometimes they will each work on a different piece and then swap over for the other to continue it.

‘‘The Story of Life because it covers all the bases, it covers nature, history, architecture, dreams, emotions, relationships, anything we come across in our lives that we think has a message that can be illustrated.’’

Working together, they transform a 100 x 70cm piece of white cotton paper into a completed ink drawing in about 500 hours. The works are mainly black and white, but they use touches of colour and sometimes gold and silver using coloured pencils.

‘‘We love working together and we work so well together. Ten years ago you might have been able to see the differences in our styles but I think after two or three years our style melded together.’’

Given the length of time it takes to complete a picture they have to ‘‘have faith’’ that their ideas will come through in the finished work as they can look ‘‘awful’’ in the early stages.

She says the pair are quite competitive and often try to outdo each other.

‘‘It’s great, it pushes us to do better, to continue to grow and improve our technique. Our technique has improved a lot since we first started.’’

The pair now draw full time from their base gallery in Cortona and exhibit their works around the world — throughout Europe via Istanbul, to Singapore, Australia, America and Canada.

Their works are sold only as prints and they retain the originals.

‘‘It makes them accessible to everyone in size and price. We want as many people as possible to get a drawing in their home.’’

This year the pair have been commissioned to create a piece on the story of St Francis, the patron saint of Italy, for the Franciscan Church.

The work includes his mission to the Holy Land 800 years ago, meeting the Sultan of Egypt in the midst of a battle and having peaceful communication.

‘‘He is an icon of the Christian and Muslim faiths for his peaceful dialogue. While it happened 800 years ago, it is even more relevant today.’’

Given the Christchurch shootings last year, the Agnellis got permission from the church to send a copy of their drawing to Prime Minister Jacinda Ardern along with an invitation to see their Arrowtown show.

‘‘It’s a thank you for setting such an example, like St Francis did. We need more of that in the world.’’

The church has also allowed the Agnellis to bring the original of the work to New Zealand to be exhibited. Next year it will be exhibited in Jerusalem and the Vatican, along with another work based on the nativity scene.

‘‘It’s been a big project for us. It is quite a special thing.’’

She visited the town and came across the Lakes District Museum Gallery, which she thought would be the perfect place to exhibit as ‘‘everyone comes to Arrowtown’’. So she booked a spot and the following year they came out to hold an exhibition.

‘‘I think David [Clarke, museum director] thought I was a bit crazy but never mind.

‘‘Luigi had never been to New Zealand so it was a great opportunity for him to see the country.’’

The pair like to exhibit in places off the beaten track rather than in big cities and to contribute to smaller museums and galleries rather than large private galleries.

‘‘We like our work to be as accessible to as many people as possible. Here we get people that would never dream to go into a gallery.’’

During their summer here last year, they got inspiration for their work, drawing Arrowtown and a New Zealand forest scene from a trip to Glenorchy.

They are working on a couple of other New Zealand works while they are in Arrowtown so people can see them create as well as see their work.