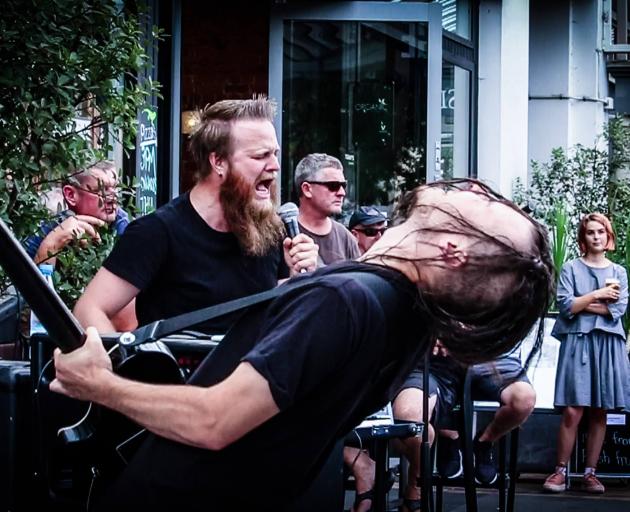 Q Who are you and where are you from?

We are Jordan Cossill (guitar) and Matt Hoffman (drum machine, vocals). We're from Invercargill. We've just completed the North Island leg of our second national tour, in support of our new EP SHARPS!. We're doing a short South Island leg prior to heading off to Melbourne for a couple of dates at the end of March.

Q What sort of music do you make?

Sludgy, grimy, industrialised noise rock. We've taken to calling it ''electroscum'', which we thought was a really good/hilarious descriptor. We love our made-up, cobbled together genres!

We don't take ourselves too seriously, but at the same time, we totally f**king mean it. I remember reading an interview with an American band who I can't place right now, but they described themselves as ''good times, bad vibes''. I like that motto. We make snotty, difficult, hostile music, but we're not at all po-faced about it.

Q How do you make it?

Generally, Jordan comes up with a couple of riffs and a transition or two, and we'll workshop it a bit, writing segments of drums for each part on our trusty drum machine.

Once we've got some structures more-or-less together, then we go round again, building in transitions, and kind of hanging the thing together, making sure it sounds right. Then we do final edits before I take it away and write the lyrics and vocal parts.

That's a whole other battle, and I won't bore people too much with the ins-an-outs of my, ahem, ''process'', but it's solitary relative to the rest of our songwriting. I come up with vocals using gibberish or nonsense vocals, and then kind of ''hang'' words off where the gibberish syllables sit. It's like a f**kin' art installation.

We also have to work within the confines of the drum machine. It's limited in terms of the sounds we can generate, and the rhythmic techniques we can employ. But we kind of like the restrictiveness of it, we have to try to get around the constraints we've imposed on ourselves. It makes the music more interesting.

If you like noisy, aggressive, dissident music, then you'll like us. For fans of: Melvins, The Jesus Lizard, Big Black, The Cows, Godflesh, Killing Joke ...

Q What should people expect to experience if they head to the Dunedin gig next Saturday?

We've got some amazing support bands: Night Lunch are completely original and weird and nausea-inducing in the best possible way. Ashes to Battle - the precision of their music is really intimidating, and it's just completely joyous and extreme. Our final support band is Methchrist, who are legendary in Dunedin metal circles. They are bowel-scouringly brutal and wickedly fast, and you really have to bring your best performance to keep up.

As for us? We like to play in the round, to be enveloped by the audience. From there we can lash out in any direction. I'm a big fan of crowd interaction, of that ''anything-could-happen-next'' atmosphere. What will happen on that front specifically, I can't say. We don't rehearse that. It's about trying to run on instinct.