Wonderful time of the year 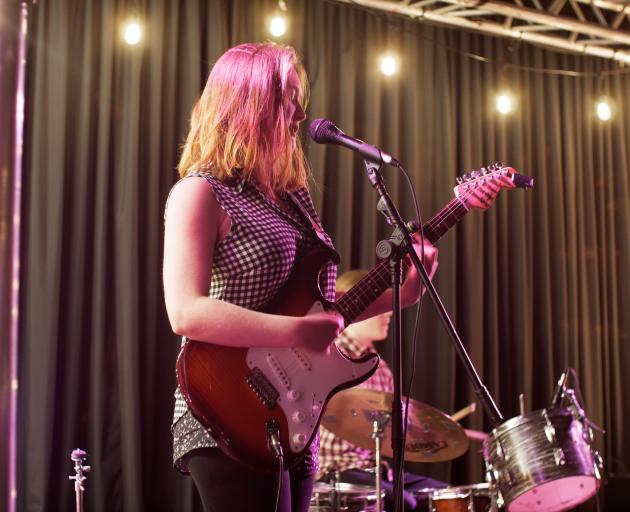 Melicen Barber will join Nadia Reid, Holly Arrowsmith and the Everly Sisters (Rachel Bailey and Flora Knight) at the Port Chalmers Town Hall tonight. Photo: Supplied
There has never been a better time to put on your best autumnal regalia and head out into the enchanted evening for some live music, and tonight the Port Chalmers Town Hall will be packed with people doing just that as they attend Nadia Reid's (annual?) Christmas Show.

Performing at the show will be Nadia herself (playing stripped-back guitar-only versions of her songs), as well as Holly Arrowsmith, The Everly Sisters (Rachel Bailey and Flora Knight) and Melicen Barber.

The first two need no introduction (although if I were to give one, it would probably use the words "powerful songwriting" and "captivating harmonies"), but you might not have heard of Melicen Barber.

A pupil at Logan Park High School, Barber participated in the Amped Project mentoring programme, which Reid ran this year, and impressed her to the point that Reid invited her to play at the Christmas show. Having seen her perform at the end of year Amped gigs, I understand why.

I spoke to her earlier in the week to see how she felt about being asked to perform alongside such established and well-respected artists.

"I'm really excited about it because she's great," she said. "I really like her music, and it's quite a big crowd, so being trusted with the ability to play well enough to do a show like that is pretty cool.

"I'm really looking forward to it. It's probably one of the biggest shows I've performed solo, so its like `woah'.

"A few of my friends are coming and I'm pretty excited to see them there and just kind of perform to the best of my capabilities. I'm looking forward to it more than I'm freaked out about it."

One of the things that sets Barber apart is her almost conversational vocal delivery and rich lyrical content. Her words spill out and weave around her guitar playing, often dividing beats in interesting and unexpected ways. In her words she uses "a lot of lyrics".

"And sometimes that backfires a bit because I can't breathe through the songs. But yeah, usually a lot just, sort of, appears when I start writing. I get a lot out and it does end up almost rapping at the end."

I asked what her plans were for the future when it comes to her music.

"Matthew [drummer in her band] and I are going to try and get some music out before the end of the year. I've got a few tracks that I'm working on now that we're going to post up on our Facebook page.

"I definitely want to go forward with my music after high school. I'm not sure exactly how I want to do that right now in a way that will also support me going forward, but I definitely want to keep doing it because I like it too much to give it up."

Note: The show will be magical, but it's also likely to be pretty full. If you can't get in, don't worry, head back into town and towards The Cook where Koizilla is performing songs from Naughty Dogs' 1998 magnum opus for the Sony PlayStation, Crash Bandicoot 3: Warped.

Christmas truly is the most wonderful time of the year.