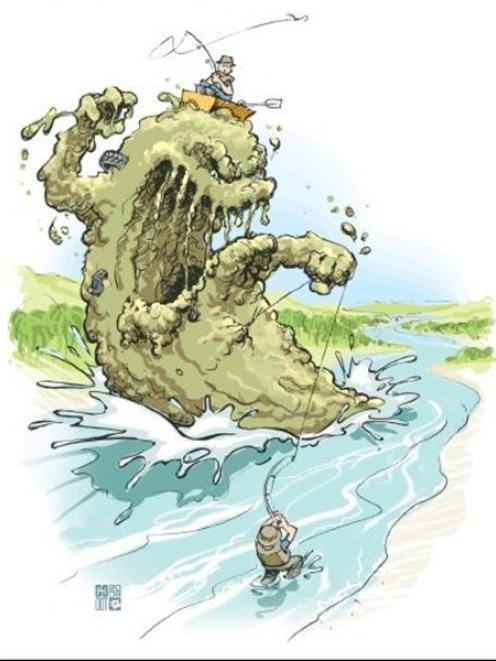 If you want to see red, check Biosecurity New Zealand's latest didymo risk map, which shows the level of threat to South Island rivers from the alga.

The map is colour-coded, with hot hues denoting high likelihood of infestation.

The map parallels the state of many of our rivers.

Blue and green, the natural tones of many of our upcountry waterways, have been usurped by the beige and brown algal blooms of a freshwater plant that likes cool water, a stable and moderate flow, and high UV levels.

From Southland to Marlborough, the depiction of braids east of the Main Divide is not unlike the human circulatory system: in this case, these arteries and capillaries are in danger of becoming clogged.

Can we fix it? Well, not really.

According to Biosecurity New Zealand, which operates under the Ministry of Agriculture and Forestry (Maf), eradicating any microscopic organism from an aquatic environment is virtually impossible.

Cathy Kilroy, a scientist with the National Institute of Water and Atmospheric Research (Niwa), agrees with this rather pessimistic appraisal: "Once didymo is found in a river, it would be pretty hard to stop it spreading downstream - unless you get in there and kill everything."

Since October 2004, when she made the historic announcement she had identified didymo in Southland's Waiau and Mararoa rivers, Ms Kilroy has been studying the biology and ecology of the alga.

"I was working on a Meridian Energy project with Fish and Game New Zealand ... I had heard of didymo and had seen it overseas but it wasn't on my radar at all. I didn't think it would be a problem here."

Eleven months after her discovery - the first time didymo had been found in the southern hemisphere, though retrospective reports indicate it was visible in the Mararoa River as early as 2001 - the alga turned up several hundred kilometres north, in the Buller River, lending credence to the belief humans have been a key contributor to its distribution.

"It stayed in the Waiau catchment for almost a year before we found it in any other river," Ms Kilroy says, referring to the Buller River discovery in November 2005.

"Very quickly after that it was found in the Hawea River, then the Waitaki. It popped up in a few different rivers.

"If it had spread from the Waiau River, just gradually moved out to other rivers, then you'd think [its spread could be attributed to factors other than human] but to pop up in the Buller and the Clutha catchment ..."

The unintentional transport of microscopic didymo cells via recreational or industrial equipment, including fishing gear, vehicles and boats, prompted the implementation of the "Check, Clean, Dry" campaign soon after Ms Kilroy's discovery.

Yet while angling carries a high risk of spreading didymo, activities such as tramping and hunting are also potentially problematic.

An American angler is believed to be responsible for introducing the alga to New Zealand, with DNA tests revealing the strain to be from the United States.

The cost to the economy, including the loss of commercial eel fisheries, damage to water supplies, biodiversity values and tourism, is estimated at up to $285 million over the next six years.

Large blooms have been found throughout the Clutha catchment, including the Hawea River, and also in the Waitaki River (officially within Environment Canterbury's boundaries) and the Lower Kakanui River.

In January last year, it was discovered in the Route Burn; by Christmas, it was in the remote Nevis River.

In April this year, it was found downstream of the confluence of the east and west branches of the Manuherikia River, a waterway in which it was first discovered in late 2007.

Besides its aesthetic impact - it's not called "rock snot" for nothing - the weed also poses a threat to the nationally threatened lowland longjaw galaxias in the Kauri and Kakanui Rivers in North Otago (by smothering habitat).

In simple terms, a key factor in the severity of didymo is the speed of the flow of water next to a riverbed.

A recent Otago Regional Council study of the Fraser River, near Alexandra, showed that didymo cover was high when flows were low and stable.

However, when flows increased, much of the weed was removed and replaced by native algae.

In rivers with long, stable flows, such as the Hawea, Clutha, Waitaki and Waiau, all of which are controlled by hydro-electricity schemes, didymo blooms are large.

Rivers with more variable flows, including the Matukituki, Makarora and Wilkin, have not experienced such significant blooms.

"Most of the major rivers are at risk, but not all of them will get it so badly," Ms Kilroy says.

"I don't think all rivers are susceptible in the same way.

"It is not so much the amount of flow but, rather, the type of hydrograph; whether a river gets lots of floods or is stable.

Lake-fed rivers have more stable flows, hence are more likely to have didymo.

Big flows can wash it away."

Although didymo prefers a river environment, blooms have been found in South Island lakes, including Lake Wakatipu, where didymo has been seen on the shoreline.

Internationally, relatively little research has been done on didymo.

When it was first found in New Zealand, the information upon which a response could be worked out was primarily anecdotal due to the absence of validated scientific studies.

Now, through the work of Ms Kilroy and others, New Zealand has built a significant body of research on the organism.

"In places where it had already caused problems, such as Canada and the US, there was no incentive to fund research because the species was already there.

"When it came into NZ, we were pretty sure it hadn't been here before so all of a sudden everybody wanted to know about it."

Ms Kilroy is at present involved in a research programme on the Waitaki River and tributaries looking at why didymo establishes itself easily in some braids but not in others.

Among the factors is the role of spring water in inhibiting growth of the alga.

"There seems to be a pattern - we noticed very early on, in the Mararoa, actually - that didymo was not growing in spring-fed or ground water-fed tributaries flowing into the Mararoa.

"It's certainly quite bad in the Waitaki, I can tell you that. It's as bad as I've seen, actually."


Graeme Hughes, a Fish and Game officer based in Kurow, corroborates Ms Kilroy's findings in regards to the current didymo blooms on parts of the Waitaki.

"It is almost back to what it was last year. I've been out on the river the last couple of days and was surprised at how quickly it has recolonised. It is really invasive."

Mr Hughes, the first person to officially confirm the presence of didymo in the Waitaki River (in January, 2006) says the discovery was devastating.

"I was the first one to identify it. A fisherman who had heard about it brought me a rock with the stuff on it and asked, `is that that horrible [stuff] from down south is it?'.

"That was at Otiake, in the main stem there, where he had been fishing. Subsequently, I went down the next day and it was well spread. The boaters wouldn't see it in shallow areas but it was prominent in the fishing areas.

"Within 12 months, it had covered some 50kms. From Otiake, it went up - it went downstream faster than it went up, obviously - but it even moved upstream during the winter."

Big rainfalls in April and May this year resulted in hydro operator Meridian Energy spilling water out of its Waitaki schemes, with flows of 1000-plus cumecs scouring the river of didymo.

The problem is, such precipitation is rare in the catchment.

Mr Hughes estimates such an event would occur only once every three or four years.

"Our usual problem up there is that the lake storage is very low. We had these unusual northwesterly events and, bingo."

Some six months later, the blooms are back again.

It's depressing, Mr Hughes says, adding some anglers have vowed not to fish the Waitaki as long as didymo is present.

"You don't know what you've lost until it's gone ... to see clean gravel ripples is quite a joy. But to see that blanket of beige-brown . . . is depressing."

Central Otago jet-boating enthusiast Phil Tosswill is equally concerned at the presence of didymo in rivers he and others have long enjoyed.

Though the weed has the potential to cause engine failure or damage (by clogging a jet boat's cooling system), Mr Tosswill is more concerned about didymo's impact on systems ecological rather than mechanical.

"The first time I really noticed that didymo was going to have an influence on our activity was in February, 2006.

We had come down Lake Wanaka and were heading down the Upper Clutha.

We were absolutely gob-smacked; we couldn't believe the amount of didymo bloom that was floating in the water after the confluence of the Hawea River.

"As we progressed down the river, several boats started overheating because their cooling systems had been blocked by it. We pulled into shore and had a high-level conference about the future of jet-boating on the river," Mr Tosswill reflects.

"We were disgusted and had to ask, how the hell did this happen? Were we responsible or partly responsible? And what could we do in the future to make sure we didn't spread this damn thing? That conversation went on for weeks and weeks.

"We go to the West Coast quite often and are mindful to keep our boats clean. We've boated a lot of rivers from, say, Paringa to Cascade, and we haven't seen any over there. I'm surprised and pleased to see it hasn't got to the West Coast."

Alas, despite Mt Tosswill's lack of anecdotal evidence, didymo has been on the West Coast for a few years.

It was found in the Kakapotahi River in late 2007 and in January this year, it was discovered in the Paringa River.

Elsewhere, the majority of Fiordland National Park remains free of didymo, a result of the "Check, Clean, Dry" message, according to Doc Southland ranger Martin Genet.

"Hopefully, our message will remind everyone using the rivers and lakes to avoid transferring potentially didymo-infected water from the edges of the large eastern lakes like Te Anau and Manapouri up into their didymo-free tributaries."

What is didymo?
- Didymo is a member of the group of single-celled aquatic plants (freshwater algae) known as diatoms.

- Although it is microscopic, didymo can form dense colonies called algal blooms, which can be seen with the naked eye.

- Diatoms are unique in that their cell walls contain silica (a major element in sand), which is why didymo feels gritty when touched.

- Didymo also contains chlorophyll, a pigment which enables it to make its own food by using energy from the sun.

- Until its official discovery in New Zealand in October, 2004, didymo's native distribution was believed to be limited to cool, temperate regions of the northern hemisphere, including the rivers of northern forests and alpine regions of Europe, Asia and parts of North America. It had never been found previously in the southern hemisphere.