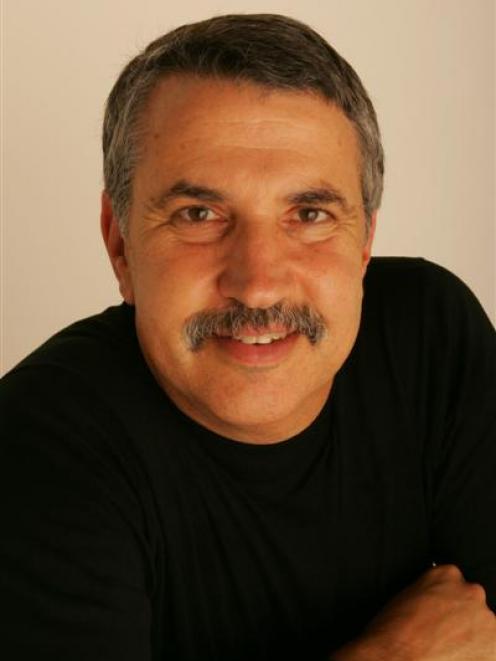 Thomas Friedman
It is 32degC on an autumn day, 89% humidity. One-hundred thousand refugees are stranded in Texas, courtesy of Hurricane Ike. Could just be a bad day. Then again, it could be something worse.

The headline of Thomas Friedman's column in the days New York Times reads, "How to Make America Stupid".

"Why would Republicans," he writes in what we might call classic Friedman-ese, a tone best accompanied by beating the forehead with one's open palm, "the party of business, want to focus our country on breathing life into a 19th-century-technology - fossil fuels - rather than giving birth to a 21st-century technology - renewable energy?"

This is also the tone of Friedman's Hot, Flat, and Crowded: Why We Need a Green Revolution and How It Can Renew America (Allan Lane HB, hbk, $55) $27.95), a book so combustible it makes a reader want to skip the palm of the hand altogether and bang the offending forehead against the nearest power line.

In other words, it is Friedman's column times 438 (the number of pages in the book).

Here's the gist - Americans are facing five critical issues created by their dependence on fossil fuels: increased demand for energy, biodiversity loss, climate change, energy poverty and the transfer of wealth to oil-rich nations whose politics (human rights, distribution of wealth, treatment of females) are often less than commendable.

Dependence on oil, Friedman contends, has negative effects on both the freedoms associated with democracy and on innovation.

What we need is a Green Revolution. This is our chance to show the rest of the world how to create a sustainable future.

And we are blowing it.

We have the knowledge, Friedman believes, but we lack the political will. We need leaders who are willing to make ending dependence on fossil fuels a priority.

Recycling and buying green products is all well and good, but what we have now, he believes, is a flimsy excuse for a Green Movement - we have a Green Party.

Of course, Friedman travels so much he must have the biggest carbon footprint in the country.

When asked about this, he says, "Hey, I'm a work in progress."

A few hours before he is due to speak at the 92nd St Y on Manhattan's Upper East Side, he visits an exhibit on the life and work of legendary innovator Buckminster Fuller at the Whitney Museum on Madison Ave.

Friedman takes his exercise wherever he can get it, which is why he is game to go.

Along the way, he talks about what first set him on fire.

For Friedman, it all began in 1968, when he was in 10th grade, with two separate experiences: He took a journalism class and his parents took him to Israel.

"It was my first time on an airplane," he recalls.

"It was my first time out of the country. I was blown away. Remember, this was post-1967 - an incredibly heroic phase in Israel's history."

Friedman spent the next three summers living on a kibbutz. He took Arabic in college and majored in Mediterranean studies at Brandeis.

"Losing my father," he says, "made me focus. It made me a more serious person."

Friedman is nothing if not serious. He received a master of philosophy degree in modern Middle Eastern studies from Oxford. He then went to work for UPI, reporting on OPEC as a global force.

He has won three Pulitzer Prizes and knows more about the oil business than just about any living writer, inside or outside academia.

According to Friedman, his new book is a perfect storm of ideas that have been brewing in his mind for several years.

His 2005 book, The World Is Flat, about the rising international middle class and the environmental effects of increased consumption, was an enormous success.

US News & World Report named him one of America's Best Leaders, an unusual honour for a journalist.

He worked on several documentaries about oil for the Discovery Channel.

The work of Al Gore, the aftermath of Hurricane Katrina and his wife's involvement as a board member of Conservation International brought issues of global warming into focus.

"I had this pregnant moment a year ago in May at a conference in Aspen [Colorado]," Friedman recalls.

"I realised that the IT revolution would inevitably be replaced by the ET (energy technology) revolution."

It was then that he began to understand that America faced a momentous opportunity. He decided to write Hot, Flat, and Crowded.

"I am a verbal person," he admits.

He gestures as he walks through the Fuller exhibit, looking at the dymaxion car and the models for domes and dymaxion houses.

Hot, Flat, and Crowded contains a chapter envisioning a day in the life of an American in 20 ECE, the Energy Climate Era.

It's a Jetsons-type scenario, complete with a smart grid as a source of energy, a net cloud for data retrieval and various other life-supporting/enhancing technologies.

Standing on Fuller's great dymaxion map of the world, the author is extremely conscious of other people, careful not to interrupt their concentration.

It might seem odd for someone like Friedman - who initially supported the Iraq war and is something of a political centrist - to write a book about the necessity of going green.

But he bristles at the idea that readers expect a columnist to be all left or all right all the time.

"I wrestled long and hard with the Iraq War," he says.

"I am not a political animal. I describe my political position as Americanism. Buffettism. Everything I've gotten I've gotten because I was born in the United States at this time in history.

"My whole focus is on preserving that America."

His voice rises as he talks about what drives him as a thinker.

"I'm a real free-trader. I believe in high taxes. I saw what happened in Beirut. I saw panic in the streets and people dying - cars going 80 miles an hour backwards.

"This is not just about the environment. If we lose this opportunity, it's going to be a different world for your kids and mine. We have exactly enough time starting now."

Later that night, at the 92nd St Y, people are scalping tickets to Friedman's talk.

It's an older, predominantly white crowd, and he opens with a compliment: "If it wasn't the 92nd St Y, it wouldn't be a book."

But where he really hits his stride is when he begins describing his ideas about the green movement: "It's not a real revolution unless someone gets hurt".

Friedman tells the audience that his ideal presidential ticket would be former Secretary of State George P. Shultz and Warren Buffett.

He outlines his wish list: 30% of America's energy from American-made solar power by 2050, tax credits for companies making renewable energy products and for consumers buying them, a smart electron grid, nuclear power and leaders who believe in innovative technologies rather than voting against them in Congress.

On stage, he paces back and forth, answering questions from one side of the hall and then the other.

He's probably already planning his next book as he talks about America's future. - Susan Salter Reynolds