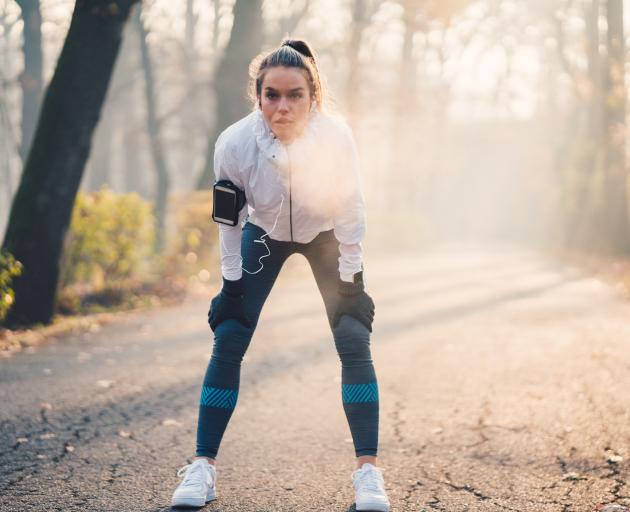 Photo: Getty Images
Working up a little more puff might be the best thing you can do for yourself, write Richard Metcalfe, Melitta McNarry and Niels Vollaard.

If you could pick one measure to evaluate your health, what would you pick? Blood pressure? Cholesterol? These are commonly measured by your GP, but there is something that is more informative: maximal aerobic capacity, otherwise known as VO2max.

This measure tells you your maximum (max) rate (V) of oxygen (O2) uptake and use during exercise. The greater this is, the better your health. In fact, VO2max is the best predictor of your risk, at a given point in time, of getting chronic diseases such as heart disease, type 2 diabetes or certain cancers, and the best predictor of your chances of living a long and healthy life. Intuitively, this does not make much sense: most people go through life without ever needing to reach their VO2max.

If you thought VO2max was just for athletes, you'd be partly right. VO2max is also used as a performance measure for endurance athletes. This makes sense as endurance athletes need to have a good ability to take up and use oxygen to generate the energy to perform exercise.

The physiologist and Nobel laureate, Archibald Hill, in 1923, was the first to measure and describe the concept of VO2max after he noticed that the body's oxygen requirements (quite low when resting) increase in proportion to increased running speed. He went on to describe how the actual rate of oxygen used by the body eventually reaches a maximum level, even when running speed is increased further (that is, it has reached a plateau). VO2max occurred at different running speeds in different individuals and exhaustion closely followed.

The tests for measuring VO2max are similar today. Participants start exercising at a low intensity, after which the intensity increases slowly until the participant cannot go any further because of exhaustion (many readers will be familiar with the format of the dreaded bleep test, which is similar).

During the test, participants breathe through a tube connected to an oxygen analyser to measure the rate of oxygen usage (VO2). The highest value achieved is termed VO2max. It is usually expressed in millilitres of oxygen per kilogram of body mass per minute (ml/kg/min), to remove the confounding effect of body size.

Although, it is important to note that this method of accounting for body size is an estimate at best and can often be very misleading.

A GOOD OR A BAD MEASURE OF PERFORMANCE?

There is a wide variation in VO2max between people, mainly explained by genetics and exercise history.

Elite endurance athletes can have VO2max values about three times higher than inactive people (90ml/kg/min v 30ml/kg/min). The highest documented VO2max is 97.5ml/kg/min in an elite cyclist. The correlation between VO2max and exercise performance is good when you look at people with a wide range of VO2max values.

Conversely, VO2max is a poor predictor of performance when you only consider athletes of similar ability.

Also, after a period of training, the change in VO2max is not at all related to changes in exercise performance. This means that VO2max is, in fact, a poor measure of performance in circumstances where it is commonly used.

VO2max is, of course, an important contributor to performance because it sets the theoretical upper limit for prolonged endurance exercise. This is not a practical upper limit, however. Even the most elite endurance athletes can only exercise at their VO2max for a few minutes. To complete a fast marathon or bike race, you do need a high VO2max, but, more importantly, you should be able to sustain a high percentage of your VO2max for extended periods of time.

Many studies have demonstrated that the risk of cardiovascular disease and early death is much lower in people with high VO2max compared with people with low VO2max. People who manage to improve their VO2max over time will lower their risk of disease and live longer. Contrary to expectation, though, this does not seem to be the case for people who manage to lose weight over time.

The logical question to ask is why VO2max is so important for long-term health. This question has largely been ignored by researchers, and there are no clear answers. In our research, our working hypothesis is that VO2max is a proxy for the amount of blood in the body. A greater volume of blood allows more oxygen to be transported to the muscles and so leads to a higher VO2max.

Having enough blood is beneficial to the whole body. Think about the ability to divert blood to your skin to cool down when it is hot while at the same time sending enough blood to the stomach and intestines to digest your ice cream. Or the ability to recover from a big operation that inevitably is associated with blood loss. The reason we know that VO2max is a good predictor of health, while we don't have much information about the importance of the total amount of blood in the body, is because blood volume is very difficult to measure (draining someone's blood is frowned upon).

To improve your VO2max, the only feasible and legal way is regular exercise, with high-intensity interval training being more effective than continuous moderate intensity training. Recent studies have also demonstrated that robust improvements in VO2max can be achieved with very low volumes of intense exercise.

VO2max may not always be the best measure of exercise performance, but it is undoubtedly important for our health, and we should all maintain exercise routines and work hard to improve it. - theconversation.com