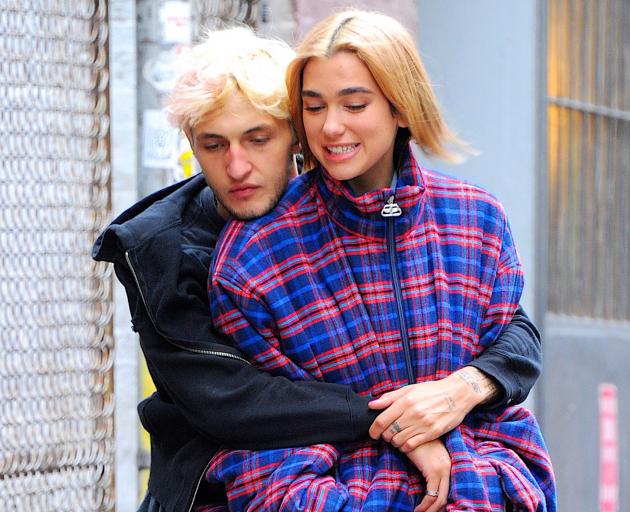 Dua Lipa and Anwar Hadid both dyed their hair blonde. Photo: Getty Images
Twinning of mascara, lipstick and eyeshadow is moving into the mainstream, spawning new ranges to meet demand.

Over Halloween, plenty of couples stepped out in matching make-up, from skeleton twins and pop-art pairs to Donald and Melania Trump. But for some, co-ordinating cosmetics is no longer just for dressing up. 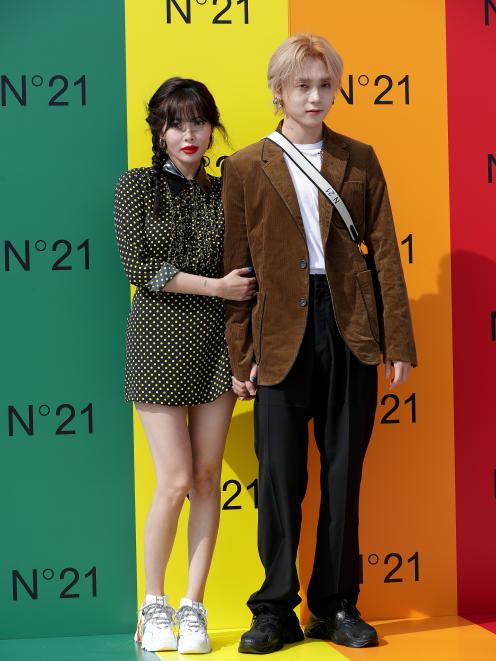 The trend for make-up twinning relies on both halves of a couple being make-up wearers - and so, for some same-sex pairs, this is nothing new. But as gender stereotypes fade, heterosexual couples are also getting involved.

Meanwhile, make-up brands are expanding their offerings: Mister from Givenchy "comprises unisex products for the eyes and complexion that bring instant and natural make-up results" while the Jecca Blac range is dedicated entirely to genderless products. Asos now lists its cosmetics under a gender-neutral Face + Body section.

"We have certainly seen a recent increase in couples shopping for cosmetics together. And, as a business, [we] take a gender-neutral approach when it comes to make-up," says Gemma Mason, head of customer experience at Superdrug.

The men's make-up industry has been growing for some time. As far back as 2013 big names such as Tom Ford and Marc Jacobs launched male cosmetics ranges. But the more recent shift, which has been coined the "beauty boy movement", involves men and boys not only defining eyebrows and highlighting their cheeks but also becoming the faces of make-up brands and lines.

The YouTube star James Charles, who has more than 16 million subscribers, became the first CoverGirl coverboy in 2016. The beauty vlogger Lewys Ball became a face of Rimmel's London campaign in 2017 and Jake Jamie, who hoped to catalyse the blurring with his #makeupisgenderless campaign, was signed to L'Oreal in the same year.

These shifts in expected gender roles have had a real-life effect - and Jessica Blackler, founder of Jecca Blac cosmetics, agrees that it is a rising trend.

"When we exhibit and host events, I have noticed a lot of couples shopping together and making sure shade and colours suit them both before purchasing items," she says.

"The gender-neutral approach to beauty is definitely becoming more mainstream. [Couples] sharing and co-ordinating with each other is a way of enjoying it together."

And it is not just for couples on the red carpet either.

"Tom started wearing make-up about a year ago, but I have always loved transforming my face," says Chelsei, a hair salon manager in Melbourne, Australia, who posts pictures of her and her boyfriend in matching make-up on Instagram (via @-zaftig--).

"He decided he wanted some black eyeliner, then that turned into eyeshadow, which turned into us doing matching looks when we go out."

She says the reaction from friends has been "super-encouraging" and that the pair now share make-up products; their favourite brands include Jeffree Star, Kat Von D and Morphe.

For Daniel Osei, a student in Virginia, in the US, wearing matching make-up is a more recent venture.

"It was her idea," he says of his girlfriend, JaLynn Evans, also a student.

"She'd always told me that I would look good with make-up on."

The pair wore a matching look created by Evans for recent photos, also posted on Instagram.

"All of our friends online loved it because they support the art form of make-up and are very open to new ideas," he says.

"In real life, I got mixed responses initially but after a while people started to admit they really liked the shoot."

The rise in couples co-ordinating their make-up is a win for "gender-expansive identities", says Laura Kraber, chief executive and co-founder of the inclusive make-up brand Fluide. She says they are "inspiring all of us to be more connected to our loved ones and more playful in both our relationships and our style".