Tavern with a winning formula 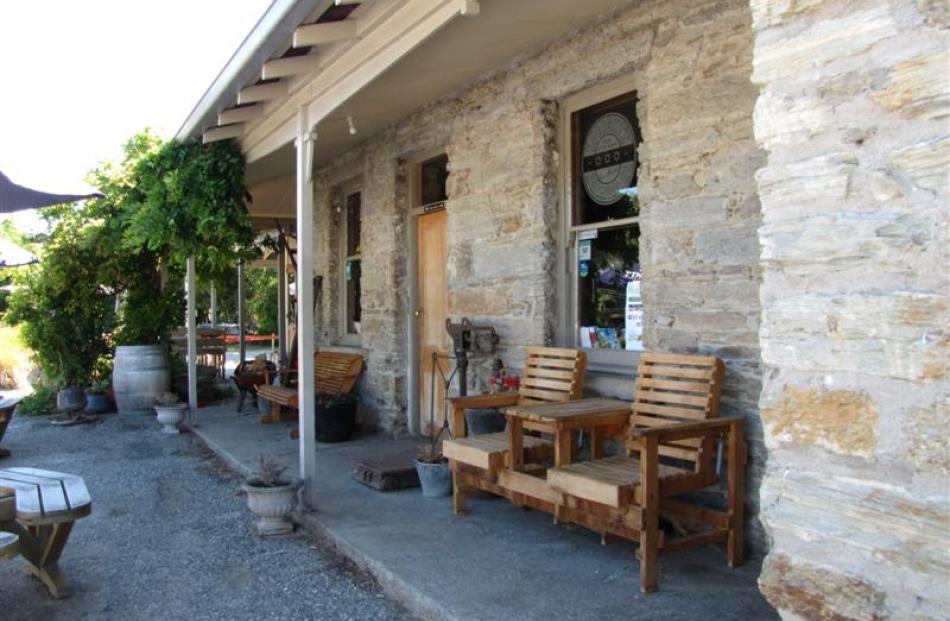 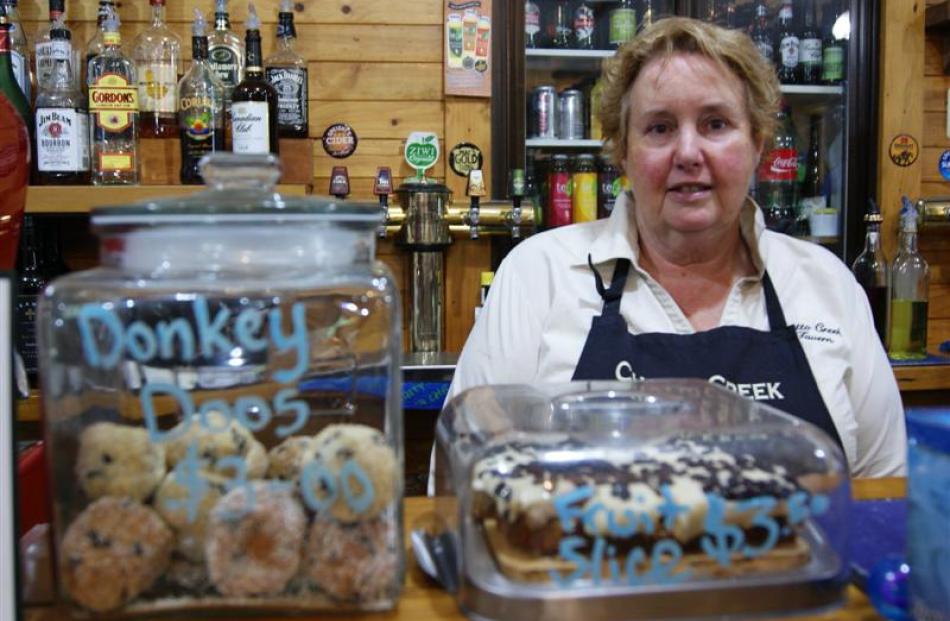 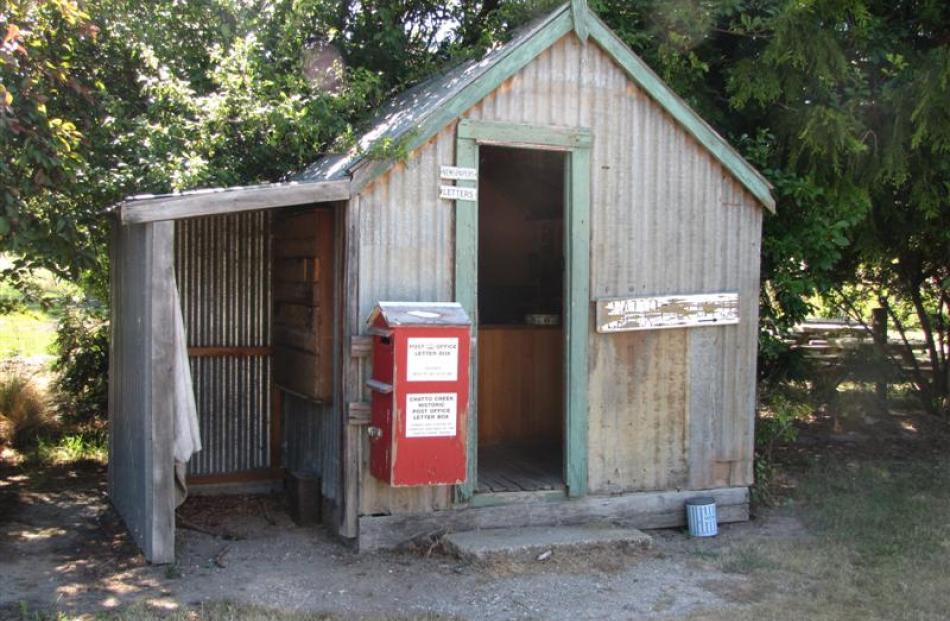 Chatto Creek's old post office, from which you can still post a letter, has been relocated and restored by the community. 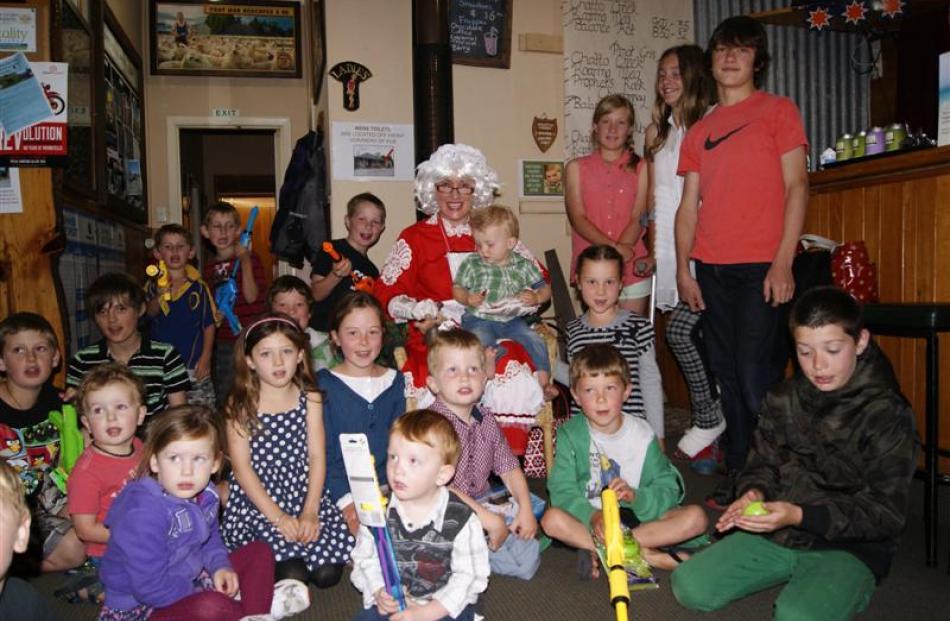 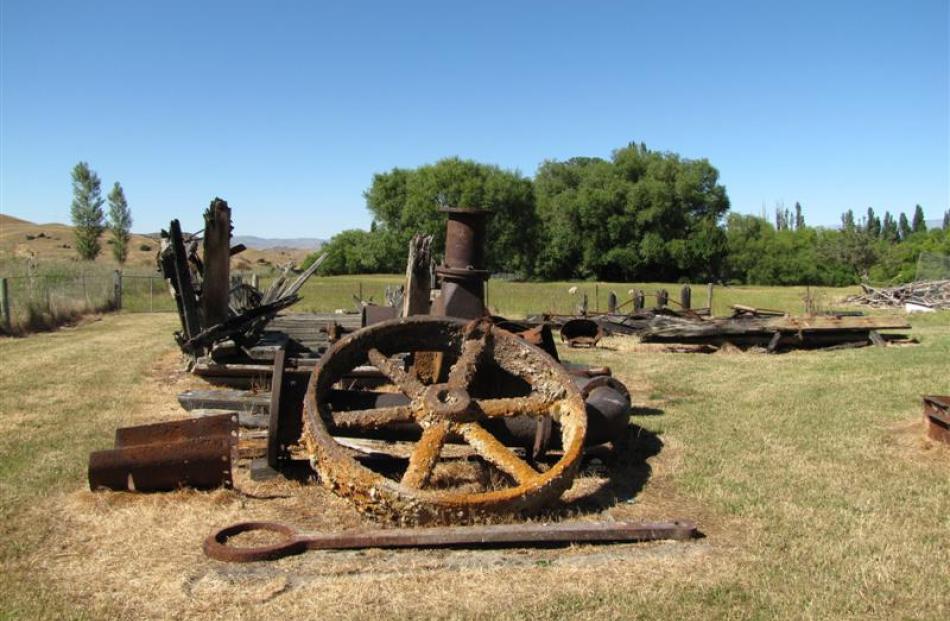 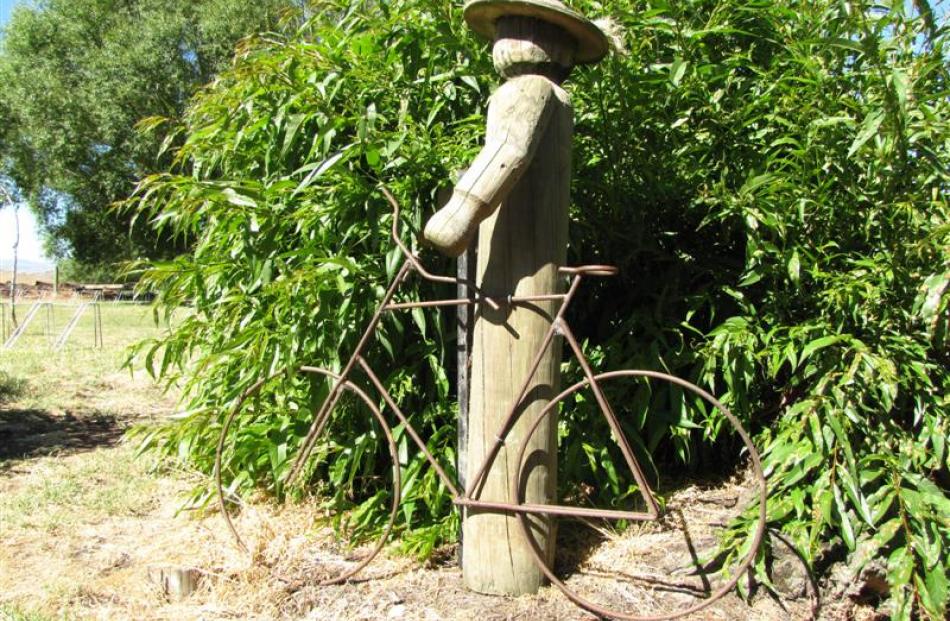 A welcoming sight for rail trailers. 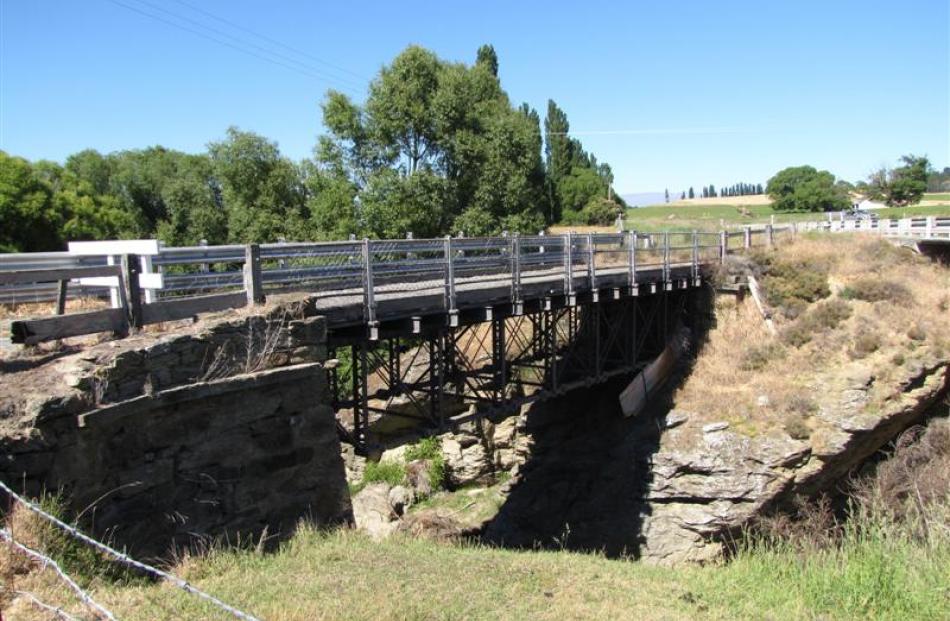 An old bridge at Chatto Creek is listed with the British Transport Museum because of the unique way it was constructed. 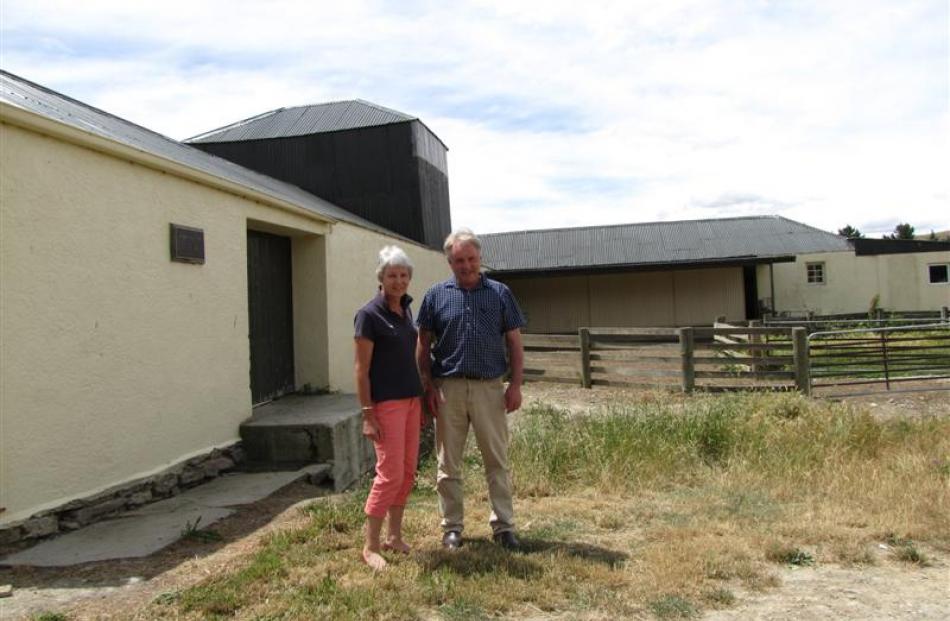 Chatto Creek is one of those dot-on-a-map places but as reporter Sarah Marquet finds out, there is much more to the area than meets the eye.

With the windswept grass browning in the scorching summer sun, sheep bleating from the hillside and two drowsy donkeys hiding in the shade, Chatto Creek may just about be the calmest place in Central Otago.

Seeing it as it is, it is hard to picture it as it once was - home to about 800 miners, railway workers, rabbiters, early farmers, those working on early irrigation projects, as well as their families.

Most of the railway workers in the area were employed to build the S-shape bends to get trains up the nearby Tiger Hill. This is the steepest ascent/descent on the Otago Central Rail Trail.

The Chatto Creek Tavern, which sits alongside the 150km trail, is one of the only buildings left of old Chatto Creek and is the heart of its modern day community.

These days only about 15 people live in Chatto Creek, situated between Alexandra and Omakau, but pub-goers come from far and wide.

The tavern was opened on December 24, 1886 as a stopping place for bullock and gold wagons, but was not the first in town - the Three Horseshoes, constructed of rough-cut timber and canvas and sited next to the creek, had not long ago burnt down.

The new pub was built of stacked stone and 18-inch-thick mud bricks and most importantly, was fireproof.

The first publicans were John and Rachel Rebecca Heywood. Some say John's spirit is still there, lurking in the woolshed. Three months after opening, he fell on a pitchfork and bled to death.

Rachel Rebecca who, as a woman, was not allowed to hold a liquor licence, married three times before selling the pub 21 years later. Current proprietor Lesley Middlemass, a 62-year-old widow, carries on the theme of strong-willed and independent women owners.

After camping in the area for 27 years, she and late husband Owen moved from Invercargill and took over the tavern on Christmas Day 1999. He died five years later.

She is the epitome of the no-nonsense, no-fuss publican, beloved by patrons and staff alike.

Her demeanor may be best summed up by Australian journalist Rob Chester, who rode the rail trail with his family in 2010 and wrote in Perth Now: ''But now, on this freezing-cold morning with rain beginning to fall, we hit the wall. We had fantasised about drinking a hot chocolate at the Chatto Creek pub for the past hour, and the pub was closed.

''It was that moment, as we gazed at our slightly blue and shivering 6-year-old and felt a pang of parental guilt, that we were saved.

''A bustling force of a woman bounced out of the building, startled to find three frozen travellers standing on her front door.

''Look at you, Miss Muffet, she said, eyeing in the junior member of our endurance team and realising something needed to be done.

''She couldn't open the pub, she explained quickly, because she was rushing out for a family emergency. But she couldn't leave us stranded.

''So, she took us through the pub and into her home at the back, put the kettle on and turned to the kids channel on the TV. She wouldn't take money, she said, because we were doing the work. All she asked was that we close the door on the way out, and then she was off.''

''Some nights it can be four men having a drink and six women sharing a pot of tea.''

Under Mrs Middlemass' leadership, the tavern was last year named the best country hotel in the Hospitality New Zealand Awards for Excellence.

It is more than just a local watering hole though. Adorned with an extensive collection of antique guns and other historic artefacts, it is the unofficial museum of the area, and the information centre.

The surrounds too contain artefacts. A bridge off the car park, for example, is listed with the British Transport Museum because ''it's pretty flash underneath'', Mrs Middlemass says.

The tavern also serves as the base for community groups, clubs and events. Some of these include:

Knitters Club: Ladies-only, where little knitting but some serious talking gets done; has been raising money for the 2014 Relay For Life.Chatto

Creek Curling Club: Publican always a member; has been going for 75 years and proudly sits at the bottom of the table.

Bark Up: An annual event; if a dog doesn't complete a task, its master has to.

Community Christmas Party: An annual pot-luck dinner since 1994 which includes a visit from Santa or Mrs Claus with a sack full of gifts.

The pub also now houses a defribillator. ''Within two kilometres of here in the last however many years we have had three people pass away on the rail trail. There's car accidents out there, too,'' Mrs Middlemass says.

With input from the Chatto Creek Motor Cycle Club and Contact Energy, more than $3000 was raised and locals have had lessons in how to use the device.

Things to do in Chatto Creek

Accommodation: Two double rooms and a bunk room at the tavern as well as campsites and motor-home parking.
• Enjoy refreshments at the tavern
• Post a letter from the country's smallest post office
• Check out the remains of the Chatto Creek Gold
• Dredge
• Try your luck at fishing in the creek (after buying a licence)
• Cycle the Otago Central Rail Trail
• Play a round at the 9-hole golf course
• Check out the historic wooden trestle flume taking irrigation water across Chinky Gully.

From 1889 to 1901 the Chatto Creek gold dredge, a 18m steam-powered dredge, worked the Manuherikia riverbed about 4km from where its remains now lie, between the Chatto Creek Tavern and the Otago Central Rail Trail.

The Chatto Creek Gold Dredging Company's mining licence entitled it to dredge a 20ha section of the river around its confluence with Chatto Creek.

It made a reasonable return, averaging 10oz to 40oz of gold a week but had two exceptional weeks in which it recovered 70oz and 150oz.

The dredge suffered breakdowns, was unable to work when the river was in flood, and in February 1900 one pontoon was consumed by fire. At this stage the more successful dredges in the area were recovering 100oz to 200oz.

The company was wound up in 1901 and the dredge was sold for 620 to mortgagees who then on-sold it. The last mention of it in newspapers of the time was in 1909.

It was salvaged from the Manuherikia River in 2005 by the Central Otago Dredge Trust. In 2012 and 2013 the remnants were relocated to where they now lie by the Otago Goldfields Heritage Trust.

The heavy metal parts, the boiler and bucket chain, along with the Australian hardwood and North Island kauri timber used to build the dredge and pontoons, have been arranged in roughly the order they would be if the equipment was operational.

The trust would like to one day reconstruct it.

Just on the Alexandra side of Chatto Creek is the historic Moutere Station, which contains some of the earliest buildings in the area.

Along with the nearby Galloway Station, it was among the first land farmed in Central Otago and the complex now has a category one rating with the New Zealand Historic Places Trust.

In 1857 Scottish brothers Watson and Alexander Shennan leased the stations from the Waste Lands Board.

The Jopp family have farmed the station for five generations and are listed by the trust as being special figures in the history of pastoralism in Otago, alongside Watson Shennan.

The station was once bounded by the Clutha River through the Cromwell Gorge to where Alexandra now lies, the Manuherikia River, Chatto Creek and the top of the Dunstan Mountains, where there is sometimes still snow in summer.

There are three buildings which formed the core of the historic farmstead - the outbuilding, the stable/smithy, and the woolshed.

They are all constructed of cob and mud brick. According to the trust, surviving examples of cob construction are relatively rare.

In an effort to preserve the construction, the Jopps have plastered over the old mud bricks.