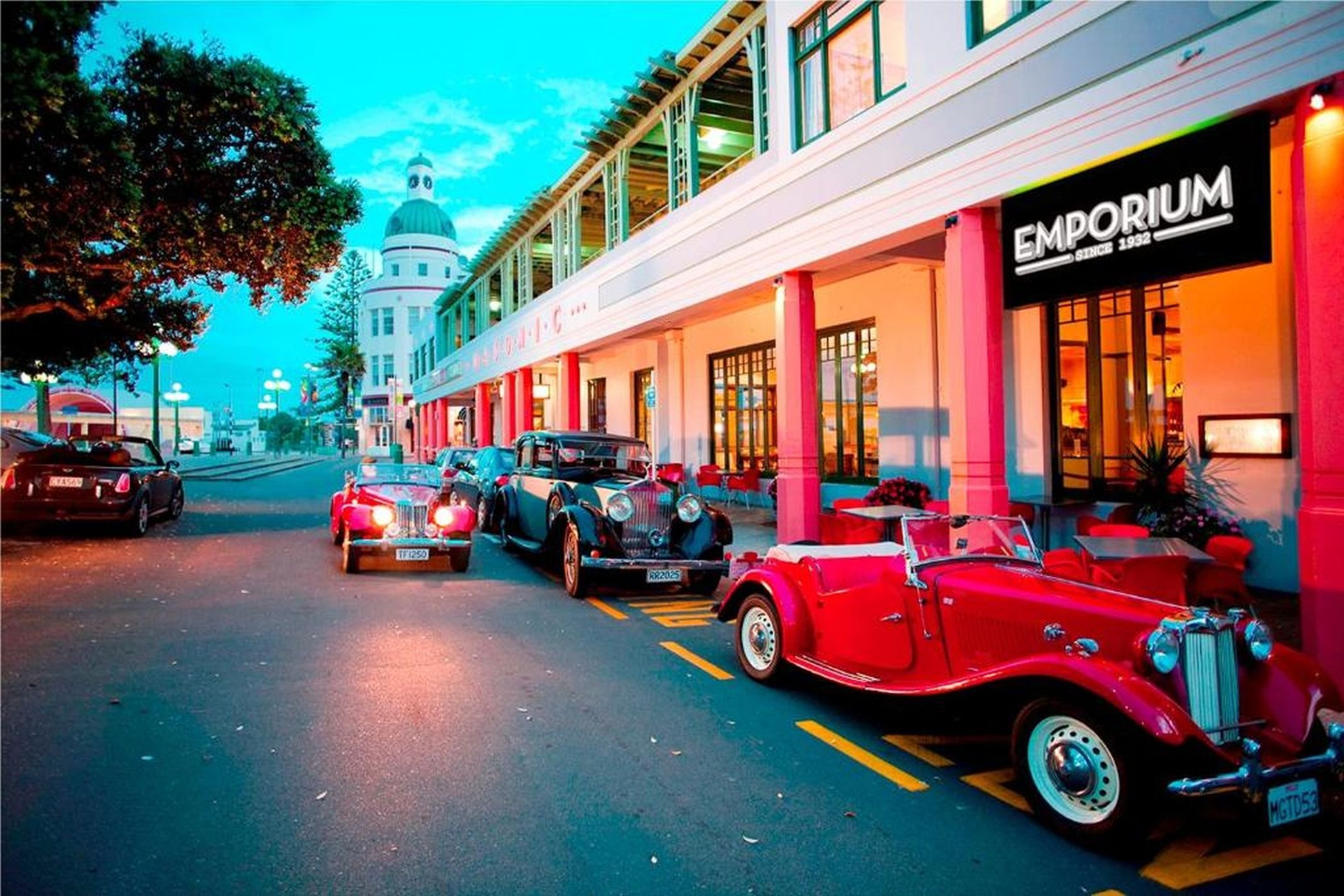 Napier embraces its Art Deco heritage. PHOTO: SUPPLIED
Ninety years on from Hawke’s Bay’s darkest days, plucky Napier is proof positive that with a little bit of vision and flair, every cloud has a silver  lining, writes Mike Yardley.

Stepping out on the streets, Napier is the kind of city where a flip-top head wouldn’t go amiss. I’m sure my head was tilted in permanent recline, as I gazed in admiration at all the geometric sand whimsical shapes ornamenting the Art Deco buildings of Napier.

But there’s only so much the untrained eye can decode. The best way to enrich your understanding of the architecture and to scratch beneath Napier’s surface is take a guided walking tour hosted by the Art Deco Trust. 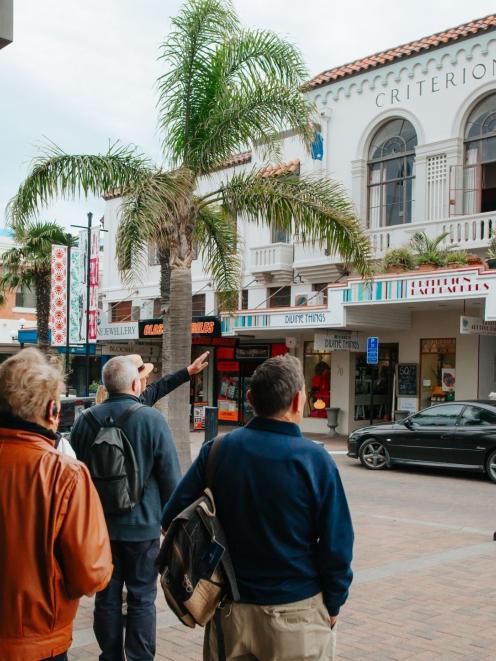 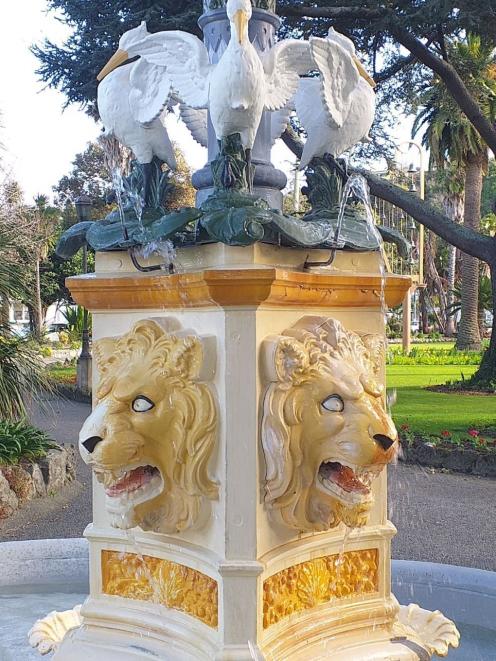 It is $28 well invested. My wonderfully straight-shooting guide, Helen, led me on an illuminating exploration through Napier’s architectural confections, eagerly helping me decipher the variety of period designs and ornamental motifs.

I soon knew my zigzag from my ziggurat. Sun bursts symbolised the dawn of a new age and the reason so many Egyptian, Mayan and Aztec shapes were in vogue was because there so many excavations and discoveries at the time, from the ancient world. Leadlight windows were a hugely popular design feature in Art Deco, as were repetitive geometric patterns and the speed lines that grace many buildings.

I delighted in Helen’s irreverent candour. She wagged her finger disapprovingly at a brutalist multi-storey eyesore in Emerson St, the Pegley building. Helen delighted in remarking that this urban intruder has never been fully occupied.

Emerson, Tennyson and Hastings Sts are home to most of the 140 original Art Deco buildings. Only 20 of the originals have been lost. One of my favourites is the ASB building, which was formerly the Bank of New Zealand, and was the first Art Deco building in the world to incorporate Maori design. The repetitive design of the tukutuku patterning works so well as an Art Deco motif.

The spectacular Pink House, a mix of Art Deco and Spanish Mission styles, which has previously been a strip club and a brothel is at present being lustily restored as a boutique hotel.

The Pink House. PHOTO: MIKE YARDLEY
Other star specimens on the walking tour include the T&G Building with its famous copper dome, the Provincial Hotel, the Daily Telegraph, Municipal Theatre and the Art Deco Masonic Hotel, which was fully rebuilt after the quake.

To complement insights on the city’s back-story, I headed to MTG Hawke’s Bay (Music, Theatre, Gallery). Free to enter, the Earthquake Gallery is the biggest tractor-beam, poignantly heightening the human dimension to the brutality of the natural disaster. You’ll glean so many perspectives on the profound impact the quake wrought on the community, from the wrenching stories of personal tragedy to the rise of New Zealand’s first pop-up shopping mall, Tin Town, while Napier was swiftly reimagined. (Tin Town was built in the gorgeously verdant and fountain-laden oasis of Clive Park.)

The Napier Quake Gallery. PHOTO: MIKE YARDLEY
Beautiful Marine Parade, studded with those famous Norfolk Pines that were planted in 1881, flanks the arcing bay. All of the earthquake rubble was deposited alongside Marine Parade, stretching for 1.5km.

I strolled beneath the shady Norfolk Pines, making my way to the National Aquarium, where I had a hot date with our flippered friends. Warmly greeted by the general manager, Rachel Haydon, and the penguin head keeper, Becs Cuthbert, I got up close and personal with the smallest penguins in the world, with the Little Penguin Close Encounter.

At present home to 14 little penguins, they are the waifs and strays of the penguin world, brought to the aquarium for specialist rehab or long-term care after being rescued. 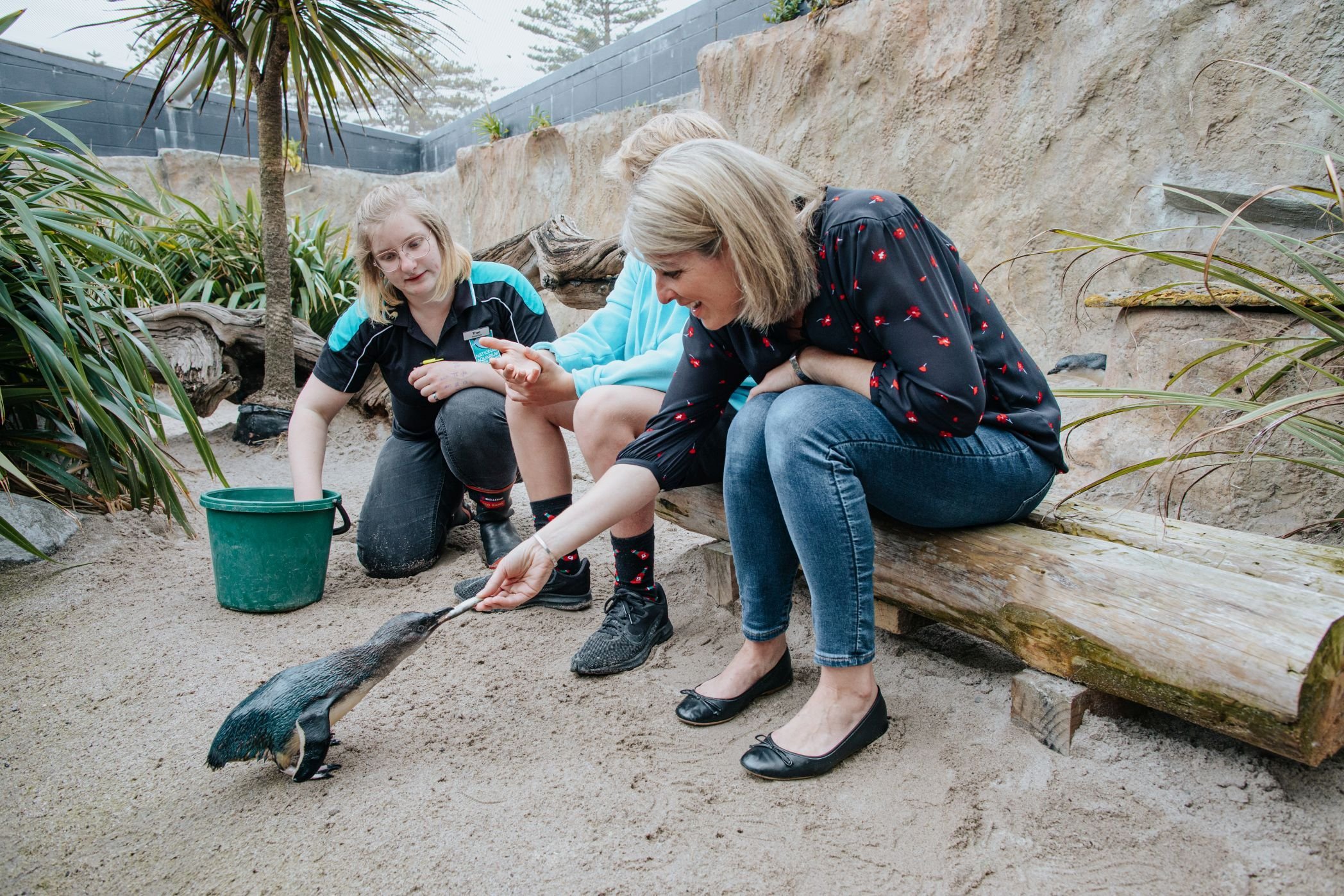 Napier Penguin Encounter.PHOTO: SUPPLIED
Some are missing a flipper or an eye, after becoming ensnared in the likes of fishing nylon. I was awestruck how even spending 45 minutes with these adorable critters vividly demonstrated how individualistic their personalities are. Some are like bolshy schoolyard bullies, while others gently sidled up to me as if they’d been studiously channelling Deepak Chopra.

As the area is liberally laced with blissfully scenic cycle trails, after taking my fill of the city centre, I saddled up at Napier City Bike Hire with a trusty e-bike for a leisurely afternoon on the Water Ride trail, skimming the coastline from Marine Parade all the way to Bayview.

The waterfront trail is loaded with eye-catching temptations like Perfume Point Reserve, the wetlands, Bayview and the historic fishing village of Ahuriri, where characterful West Quay groans with boutique stores and hearty hospitality venues. 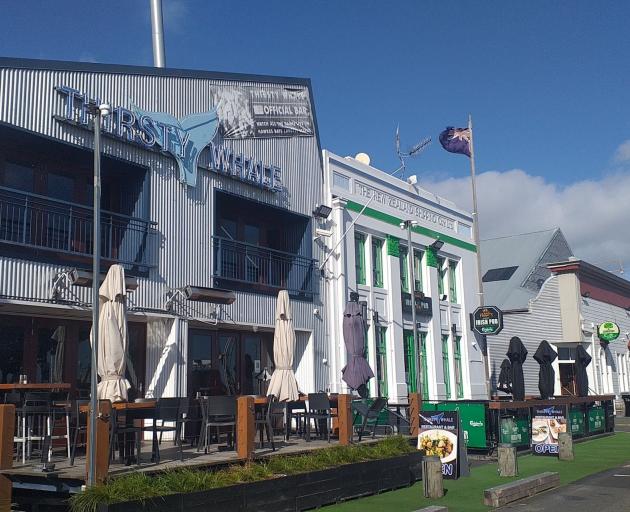 The West Quay. PHOTO: MIKE YARDLEY
But the biggest thrill was the chance to step inside the wood-carved doors of the National Tobacco Building. The Art Deco superstar is considered one of New Zealand’s most photographed buildings. The architectural masterpiece is ornamented with delicate Art Deco motifs across its facade, incorporating local rose varieties with long stems, bulrushes and Hawke’s Bay grapevines into its exterior sculpture work.

A gin distillery is slated to open in the building soon, adjoining the existing Urban Winery, under the command of Tony Bish, who is Australasia’s only chardonnay specialist, of Sacred Hill fame. 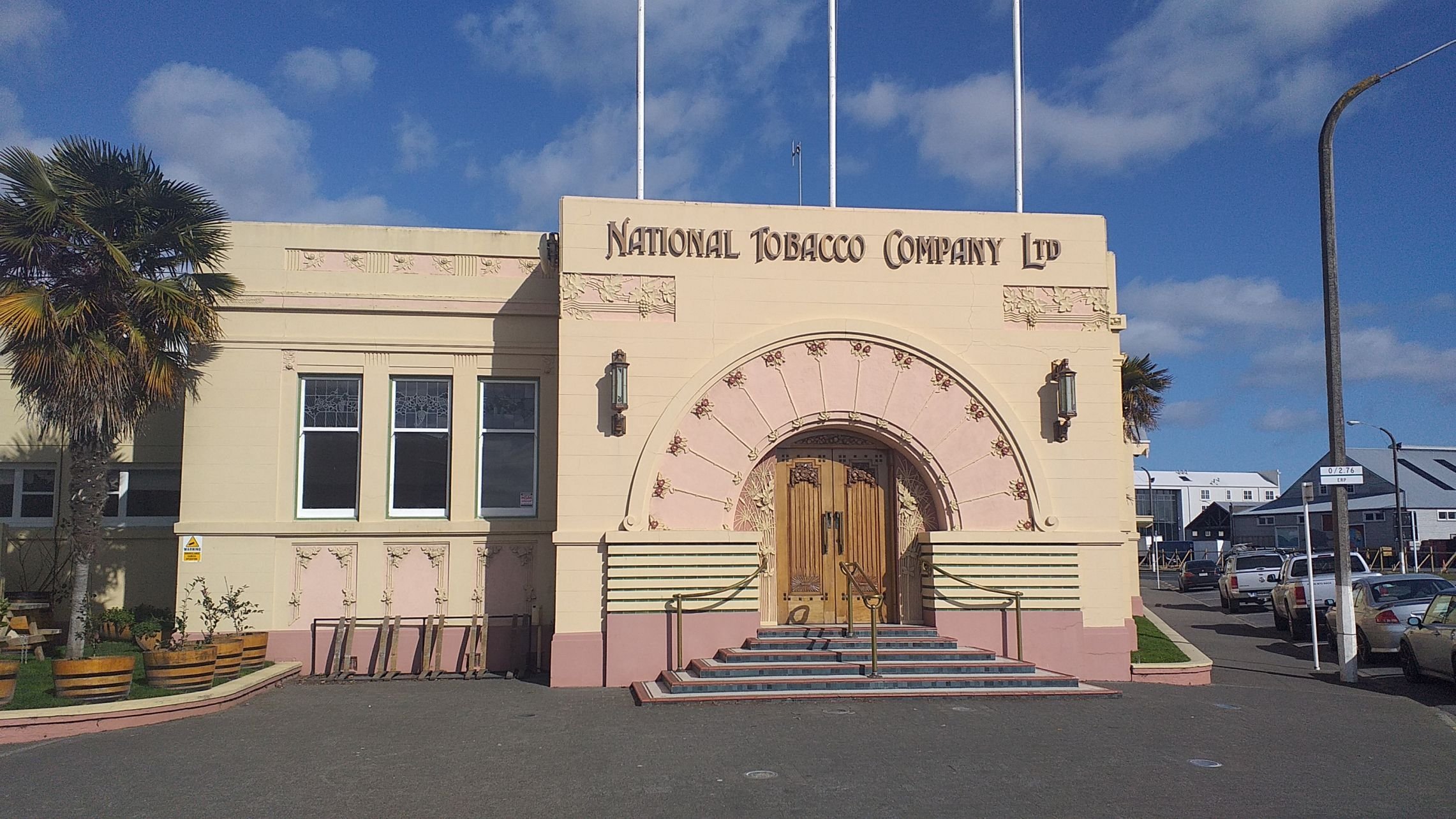 The National Tobacco building.PHOTO: MIKE YARDLEY
He exclusively produces chardonnay and was the first person to the bring Ovum Egg-shaped barrels into New Zealand.

This working winery turns four years old this month. Their Golden Egg Chardonnay 2020 was released in July and is divine. So elegant, pure, with complex layers.

Alongside a wealth of wonderful wine tastings, there’s a full bar with craft beer tastings, tapas style food and they host a regular roster of live gigs and events.

Throwing the e-bike into turbo mode, I headed back to Marine Parade over leafy Bluff Hill, studded with gorgeous old colonial villas and early settler cottages - many that withstood the seismic storm, because they were built of wood. 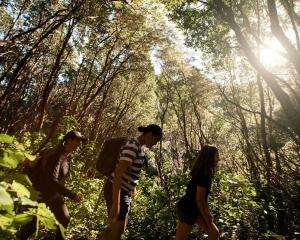