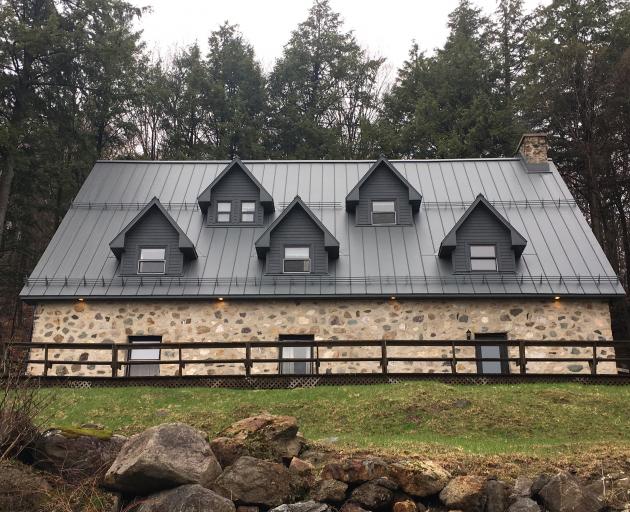 Margaret converses with fairies and conquers devils deep inside the 280ha Parc de la Gorge de Coaticook in the Eastern Townships of Quebec. She is a figure of the region's myth and legend, and the central character in "Foresta Lumina'', an enchanted experience winding along a 2.2km trail through the woods. Its creator, Moment Factory, based in Montreal, combined videos, special lighting and soundtracks to immerse the visitors in a unique night adventure from early June through mid-October. 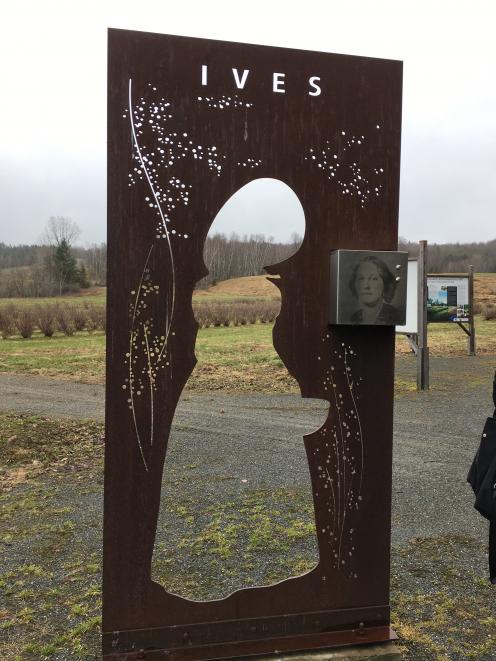 Speaking silhouette at Domaine Ives Hill, a blackcurrant farm in Compton, Quebec.
Throughout the year, the park attracts about 300,000 people who camp, mountain bike, fish, snowshoe, pat lamas and alpacas, and walk across the longest suspension bridge in North America, all 170m of it! Although I'm not crazy about heights, I did manage to walk halfway and that was just one of my personal goals while on a two-day trip through the beautiful and bountiful townships that straddle the Canadian border with Vermont, New Hampshire and Maine.

The United States has an historic social and political connection to this region dating back to the American War of Independence. The United Empire Loyalists cleaving to the British Crown bolted from the US and made their way north to the vast area that has become celebrated as a fertile land bearing artisanal products such as internationally award-winning cheese, wines, maple syrup and ciders.

With the mists hovering over the lakes and the birch trees etched among the pines, the beauty of it all was undeniable. A portrait in blacks, greys, soft whites and pale blues. Those colours provided the background hues of my home for two nights at the Relais Chateau, Manoir Hovey, in North Hatley.

North Hatley's history is intriguing - the first "summer'' people were mostly wealthy Americans from the south of the Mason-Dixon Line. For some time after the American Civil War, many bypassed New England as a summer holiday destination and chose to arrive in this area by private railway cars. Rumour has it that many even drew their blinds while passing through New England.

Danielle and Andre Pollander, Cabane du Pic Bois maple sugar shack, in Brigham, Quebec.
In any event, the splendid 37-room Manoir Hovey is standing on the site of the home built by Henry Atkinson in 1900, a private estate modelled after George Washington's Mt Vernon home. Remodelling of this prestigious resort inn began in 1950 and the current owners have created a luxurious sanctuary along the almost 550m of lakeshore. Take time to sit in the welcoming library filled with Atkinson's own collection, or sip a cold beer or a fine glass of wine next to the massive brick fireplace in the Tap Room, which was once his coach house.

My friend and I stayed for two nights in the 170sqm Heron suite. Except for the wood-burning fireplace in my bedroom, walls of glass provided a peerless view through the birch and pine trees overlooking the lustrous Massawippi Lake. The other wing of the suite, my friend's bedroom, adjoined a screened-in porch with a sizeable hot tub. A lounge area and a small but well- 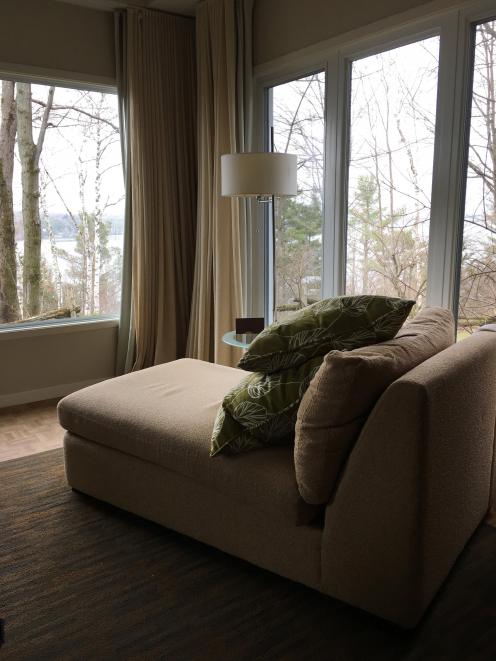 Lounging overlooking the lake at Manoir Hovey in North Hatley, Quebec.
equipped kitchen bridged the two sleeping areas. Apparently Hillary and Bill Clinton stayed in this suite at Manoir Hovey two years ago. Not sure if either of the Clintons enjoyed a canoe ride across the lake, but the award-winning inn provides myriad activities for all, including a tennis court and pool area. A sneak peek at several of the other accommodations revealed varied and imaginative use of fabrics and furniture for creating cosy, country-style environments from intimate rooms in the main manor to large, family-friendly cottages.

Restaurant Le Hatley is a light-filled room overlooking the lawns descending towards the lake. Dinner menu and presentation was first rate, but breakfast was a tad disappointing as my poached eggs were vinegary and the bacon too fatty while the cubed potatoes were hardly cooked at all. Better to stick to the buffet with its medley of fresh fruits, yoghurts, artisanal cheese, cured meats and a melange of buttery and flakey croissants and French breads.

On our first morning we drove to the town of Compton, about 30 minutes from Hatley, on old dirt roads quite the worse for the winter wear, but spring was yearning to come out as were the pastures of grasses and the farm animals.

When we arrived at La Station, the artisanal fromagerie (cheese shop), we met many of the doe-eyed, black-and-white cows whose organic raw milk morphed into cheese. The family-owned business began in 1928 with a farmer named Alfred. In fact, one of their award-winning cheeses is named after him and just won the Best Canadian Cheese award in Bergen, Norway. I'm no cheese expert, but I tasted its complex aromas of fruit, caramel and honey and promptly bought "Alfred'' and a creamy "Compton''. Also couldn't resist the outstanding grilled Hatley Road cheese sandwich made by the charming and well-informed store manager, Catherine Durand. She introduced us to the master cheesemaker who was working his magic with the milk pouring in through pipes from the farm; then ushered us to the temperature-controlled room where rounds of cheeses rested on ceiling-to-floor shelves patiently waiting their turn to ripen. 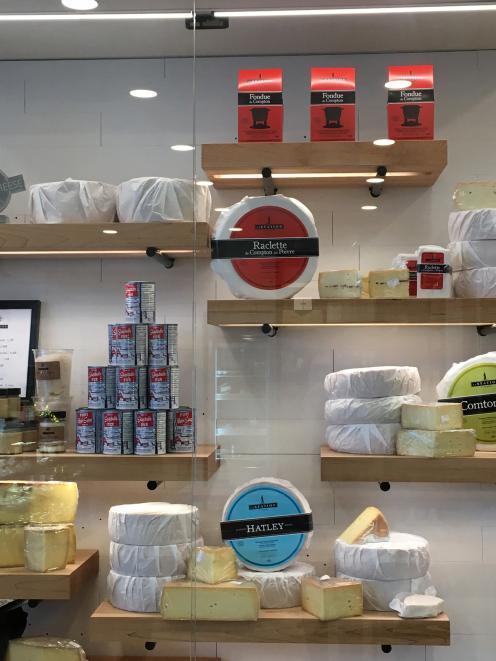 La Station formagerie in Compton, Quebec.
A 15-minute drive from La Station landed us at the doorstep of Domaine Ives Hill, a blackcurrant farm along the banks of Moe's River, where we were greeted by the owners, Marc Deragon and Yves Cousineau. The harvest from their 7000 plants produce everything from wild blackberry-based alcoholic beverages to blackcurrant onion preserves, from teas to chocolates. Our taste buds were bursting with their signature Cassigria, a sangria-infused with blackcurrants and wild blackberries. On the hillside just beyond their boutique, Marc introduced us to Mrs Ellen Farewell Ives, or more accurately, we heard the voice of the said woman, emanating from a speaker attached to a metal silhouette sculpture, presumably of her. In a well-produced narrative, Ellen, one of the first Loyalists from Connecticut to settle in the area, told her personal story. Ellen's is but one of 25 historical characters who populate the Coaticook region's 48km walking and hiking trails. The Historical Society cleverly created a link on their website between local businesses and the featured "storytellers''.

Every village seems to have its go-to bistro where the locals hang out. Our GPS delivered us to Que du Bonheur in Compton. The tireless Belgian proprietor, Corine (she prefers to be addressed by her first name only), worked her lounge with quiet efficiency and offered an astonishing array of fresh salads, soups and sandwiches, home-made ice creams and sorbets with the topper, at least for me, the dark chocolate-covered figs. Belgian chocolate, of course!

Before our return to Manoir Hovey that evening, we visited the serene St Benedict Abbey, overlooking Lake Memphremagog. Sadly we missed the Gregorian chant of the Benedictine monks, but arrived just in time to listen to one of the monks rehearsing his organ music before the evening's Vesper service. So peaceful. The main hallway is exquisite and its wall documents the long history of the monastery. Make sure to visit the boutique on the lower level where, yes, I bought chutneys and jams and chocolates and duck pate, all made by the saintly residents.

On the morning of our last day, we drove to the maple sugar shack Cabane du Pic Bois in the town of Brigham. Andre Pollander, who is not only the owner but an ambassador for maple syrup in Quebec, greeted us as if we were long-lost cousins. He and his wife, Danielle, seemed to be infused with the very product they produce. They and four employees tap all 1000 trees between March and April in the old fashioned way, with metal buckets. (Most of the 7400 maple farms in Quebec now use line tapping). Each tree produces 150 litres of sap, which is reduced to about four cups of the pure maple syrup after processing. Its laborious work but oh, the glorious result. Fifty-two sample bottles of maple syrup sat on the ledges of a window in the rustic boutique where natural light highlighted the palest amber to the darkest caramel. The crown jewels of the maple world. Tasting was even better. Each with its own distinct flavour and each to be used in a variety ways; some for cooking, some for drinking (think alcohol), some for vinegars and butters and candies. Many were employed in the superb lunch that Danielle created in her restaurant. Hands down the best baked beans and maple sugar pie I have ever had.

Well sated and the day still young, we bade our goodbyes and journeyed on to Val Caudalies in the city of Dunham. In 2004, three young friends had an idea; a great one, it turned out. Now their 50 hectares with 1500 apples trees and 25,000 grape vines produce internationally award-winning wines and ciders.

One of the owners, Guillaume Leroux, proudly proclaimed that their ice cider was chosen by Parliament in Quebec to be the official "liquid'' gift to overseas politicians. Happily I did not have to be expatriated to sip it. It was a wee bit too chilly to tour the panoramic view their property affords of the Appalachian Mountains and Vermont's Green Mountains, but I can imagine sipping their white Vidal or award-winning Vermouth on a summer's day.

As I meandered from village to village, town to town, I gathered that the seemingly symbiotic interaction among the region's artisanal businesses created a convivial atmosphere that not only profited the vendors but also the visitors.

For example, La Station cheese could be found at the Domaine Yves Hill; Cabane du Pic Bois' maple products at the Balnea Spa, which we were soon to experience. Balnea Spa was the perfect finish to our marathon tour of the Eastern Townships (all, by the way, within two hours east of Montreal).

The spa is a 160ha private natural reserve facing Lake Gale in Bromont-sur-le-Lac. Faster than you can say Jiminy Cricket, I was in my bathing suit, sitting in one of their many outdoor hot tubs with steaming water wafting upwards and as I gazed at the silver lake below. Brave hearts were plunging into the ice-cold pools or hot saunas nestled in the woods. Built on several levels, the spa offered a unique array of experiences beyond the thermal kind.

Fancy David Attenborough? Then visit the small theatre with its roomy leather chairs affixed with headsets. Attenborough narrates, in his warm and inviting way, the life of hummingbirds, which practically fly off the screen into the room. Want a bit of peace and quiet? Settle into the Moroccan bedroom with cushioned cubicles for R&R, and indulge in a massage in the original stone farmhouse.

Hungry? The elegant dining room or the lighter-fare snack room will more that satisfy. Drinking a cold kombucha by the wood-burning fireplace after an hour's massage was an appropriately soothing end to our short but memorable visit to the truly inspiring Townships. 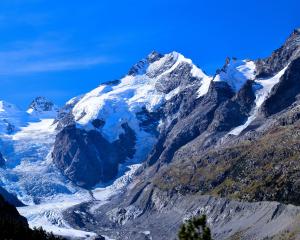 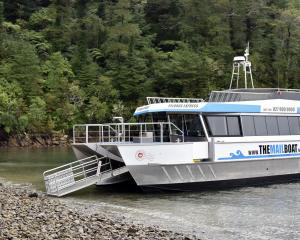 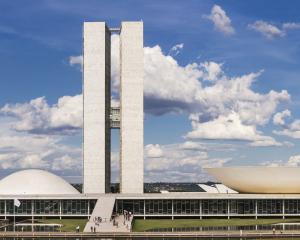 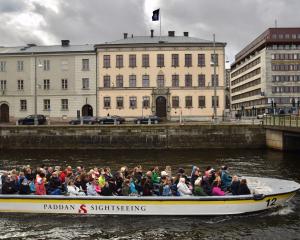 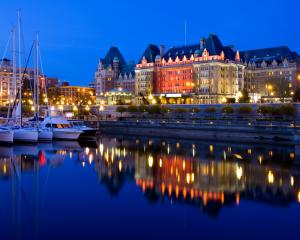 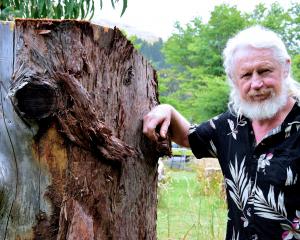