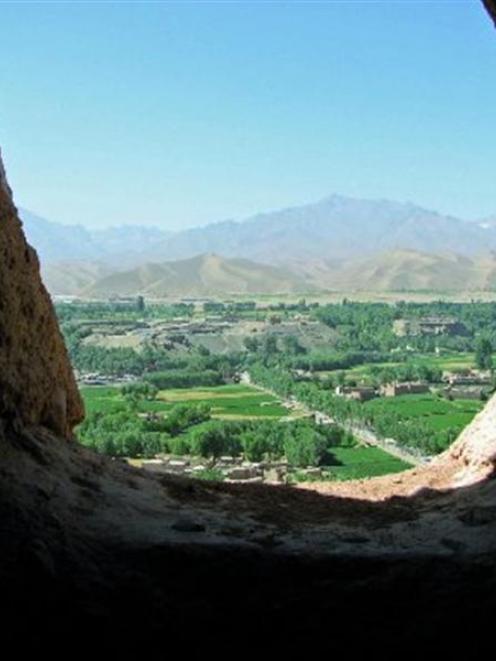 The Bamiyan Valley from the top of the Small Buddha niche.
It was late in the day when we were welcomed by a sign "Welcome to Bamiyan City".

Looking down the one-street village, I reasoned it had probably been a thousand years since Bamiyan had actually been able to call itself a city.

The town made famous by its giant Buddhas lies in the heart of the mountainous Hazarajat and is the homeland of the ethnic Hazara minority.

Being followers of Shi'ite Islam in a mostly Sunni country and the fact that they are descended from the Mongol hordes has always marked the long-suffering Hazara for persecution.

Past injustices include enslavement and the confiscation of their land, which was then given to ruling Pashtuns.

Although they became one of the most effective mujahideen armies in the Soviet war, they were mercilessly singled out by rival factions, particularly the Tajiks, in the civil war that followed.

But even the massacres executed on them then were outdone by atrocities bordering on genocide inflicted by the Taliban as the Hazara bore the brunt of their purist Islamic rage.

In the eyes of the Talibs, they were Shi'ites and so followers of a false faith, non-Afghans who lived in the shadows of idols.

Nothing could be worse.

The Bamiyan Valley was blockaded by Taliban forces, who refused to allow international food aid in to the reliant population.

In 1998, when the valley was taken, much of the Hazara population had already fled into the mountains, abandoning their lands to, again, be taken over by Pashtun settlers.

Bamiyan now holds the distinction of being one of the most secure and peaceful regions in Afghanistan, although still one of the poorest.

It is home to the country's only female governor, Habiba Sarabi, appointed in 2005, who had previously held the posts of Minister of Women's Affairs and Minister of Culture and Education in Karzai's government.

And in the 2008 Beijing Olympics, Afghanistan's first Olympic medal, a bronze, was won in taekwondo by a 21-year-old Hazara, Rohullah Nikpai.

The medal was a cause for a massive boost in the nation's pride, particularly for the young man's own people.

It was also a cause for a massive boost to his bank account as when the hero returned to Afghanistan he was showered with patriotic affection, along with a car, a house and huge amounts of cash.

After arranging a pick-up time for the following morning, I sent the driver on his way for the evening and checked in to the Zohak Hotel, a fly-infested hole with filthy toilets and beds so dirty I slept on the floor.

Across the Bamiyan River, in the last of the day's light, I wandered between fields of swaying wheat.

Above me rose the dull brown cliffs, their niches which once sheltered the largest Buddhist statues now empty like robbed coffins.

The figures traced their lineage back to the first incarnation of the information superhighway - the Silk Route.

Bamiyan once held a key position on the caravan trail between China and the Roman Empire, India and Persia.

The valley provided fodder and water for carrier beasts, shelter from the desert winds, and rest and recuperation for the drivers.

Faces from all corners of the known world would have mingled in the markets and serais and with them goods, philosophies, new thoughts and ideas to be shared and adopted.

Buddhism's popularity received a major celebrity-endorsed boost when the Indian king Asoka converted to the faith in 260BC.

The teachings were soon spread throughout the entire Central Asian region by missionaries and travellers, and Bamiyan grew to be one of the great centres of monastic learning, culminating 500 years later in the carving of the Buddhas.

Early historians wrote of the dozens of universities and thousands of monks in residence in the valley, figures supported by the number of caves dug into the cliffs all over the district, once the quarters of meditating aesthetics.

In AD630, the Chinese traveller Hsuen-Tsang described the pious residents of the valley "as people remarkable for their love of religion and, in the highest forms of worship to the Three Jewels of Buddhism, there is not the least absence of earnestness and the utmost devotion of heart".

The Buddhist fortunes of Bamiyan gradually waned over the centuries as Islam spread from Arabia and Persia to become the dominant faith.

The pacifist Buddhists had little chance of keeping their parishioners in the face of militant Muslim missionaries who converted with the aid of the sword.

The final blow to the valley, which forever consigned the population to poverty, was the invasion of the Mongol hordes in 1222.

The driver mooched beside the car the next morning.

When I asked him where he'd spent the night, he waved down the street and mumbled something about a chaikhana.

Travellers who buy dinner in the tea houses can also spend the night on the carpeted benches at no extra charge; his dinner and accommodation would have cost no more than a couple of dollars.

Minutes later, I stood in front of the "Small Buddha" niche in the spot where the Compassionate One's feet would have once been.

The vacant hollow in the cliff face was anything but small.

Filled with scaffolding erected to prevent any further collapse of the surrounding rock, it towered above me so much that it was difficult to fit the whole space into my camera lens.

In a shed nearby were chunks of rock Buddha from the size of boulders to small stones, the remains of the statue that had been catalogued and kept - for what?A guide led me to a doorway in the base of the niche and unlocked the chain.

Inside, the entire cliff was hollowed by spiral stairways cut into the solid rock.

Breath-snatching climbs led us to cells and chapels, cool, still, quiet and perfect for meditation.

Smaller alcoves, which must have once contained Buddhist figures, had been created in the walls below ornately domed ceilings.

The remnants of murals and frescoes painted on to the mud plaster of the walls could still be seen, the faces of the Buddha outlines scratched off and scrawled with Islamic graffiti.

The bored and uncommunicative guide hurried me on through the empty rooms, some blackened by the fires of more recent occupation, to an open balcony that would have once been at the top of the figure's head.

The leafy greens stretched across the valley all around, the car tiny below.

On the ground again, we drove up to the "Big Buddha", which was just that and more - colossal might have been a better way to describe its 55-metre height.

Nothing of the statue remained; in one corner was a pile of twisted metal shrapnel.

A family of Afghan-American tourists followed me through the gate, hitching a ride on my officially purchased ticket.

"Fantastic, isn't it?" the father breathed as we stared up at the deserted hole.

"Not really," I replied.

"The Taliban used the Buddhas as target practice for a week! Apparently, Osama bin Laden and Mullah Omar were actually here themselves when they blew them up!" he told me excitedly.

"How nice for them."

Despite the pleading from the world at large, the Taliban had done a terribly good job in March 2001.

"All we did was destroy some rocks," Omar is quoted as saying.

The amount of work and effort that had gone into the construction of the Buddhas and the entire cave complex was unimaginable and impressive.

Sadly, all they really did was destroy what had been, and could have been again, one of the greatest tourist attractions in the world.

The monuments once rivalled the Great Wall and the pyramids of Egypt, and could have lifted Bamiyan's people above the breadline by enticing thousands of visitors a year.

They were monuments created by a cultured and peaceful people only to be dynamited by a bunch of moronic religious nuts who impressed no-one.

As we drove away, there was a feeling of emptiness like that left by someone departed, a sense of the loss, of opportunities missed.

Naturally, when images of the exploding statues were flashed across the world in 2001, Buddhists saw the demolition as a teaching of impermanence: nothing, not even thousand-year-old Buddhas carved in solid stone, lasts forever.

The Otago Daily Times has five copies of Tea With The Taliban to give away.

To enter the draw for one, write your name, address and daytime phone number on the back of an envelope and send it to Tea With The Taliban, ODT Editorial Features, Response Bag 500012 Dunedin, or email playtime@odt.co.nz with Tea With The Taliban in the subject line, to arrive before Monday, October 11.