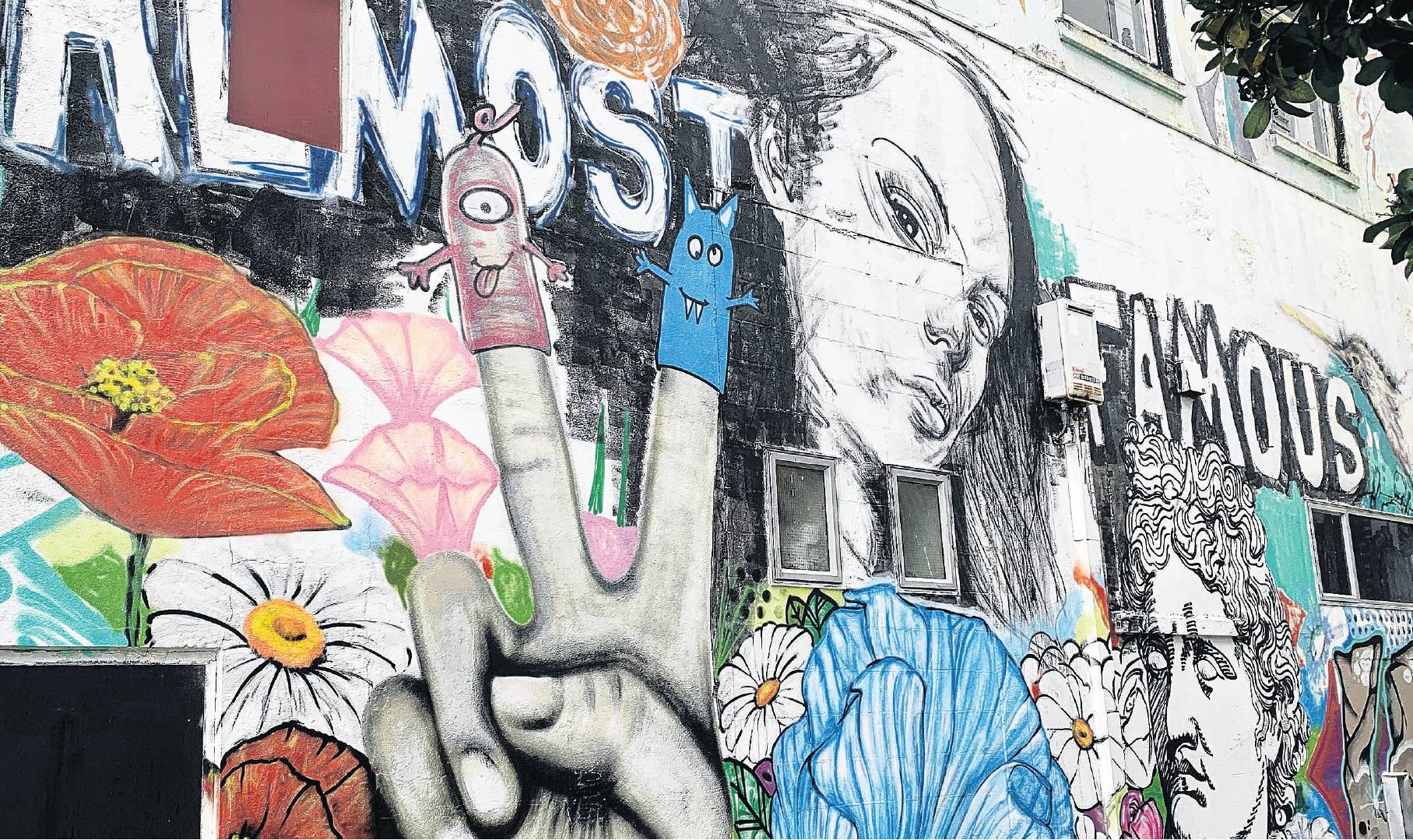 New Plymouth has a wealth of engaging street art. PHOTOS: LINDY DAVIS
If you’ve been wondering about travelling abroad but dreading the thought of two weeks in isolation, then it's time to discover some place in New Zealand you’ve never explored, writes Lindy Davis.

It’s the easiest itinerary you’ll ever have; with no jetlag, currency exchange or language barriers, just a warm Haeri mai and the certainty of discovering something worthwhile.

The west coast of the North Island is somewhat of an enigma to me, as my holidays have historically revolved around the east coast. But the notion of re-energising my urban-fatigued spirit and the opportunity to meander through sublime subtropical gardens, had huge appeal.

Taranaki has lots to offer in the way of outdoor adventure and there’s plenty for culture vultures too.

The main city of New Plymouth is relatively unspoilt, with vast green pastures on the fringe of town and a pristine coastline that stretches for miles. The landmark, Mt Taranaki, hovers over the city as much an icon of the region as Rangitoto is to Auckland. 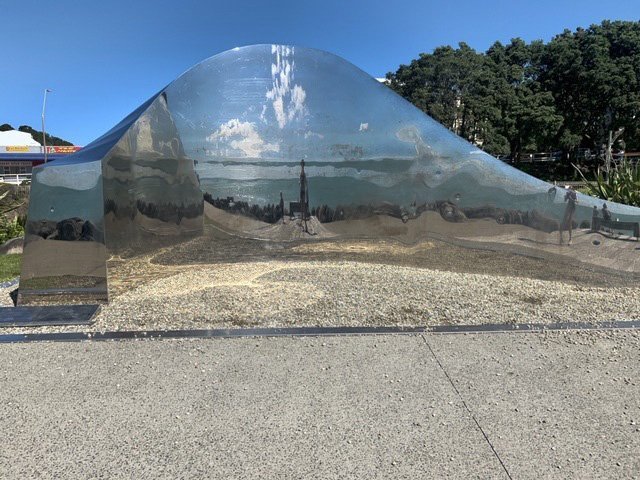 Light on the Land, by New Zealand artist Howard Tuffery, features a mirrored wave that reflects the ocean, the land and every image in its vicinity.

The only real blot on the landscape is the oil refinery and the Taranaki Port, positioned rather unfortunately on the coastal headland.

Given the range of activities on offer, it’s advisable to schedule more time than you might anticipate. It also makes sense to book accommodation well in advance. Word about this vibrant city is well and truly out.

There is something for everyone, from well-appointed camping grounds close the beach, comfortable Airbnb properties and a couple of boutique hotels in the centre of the city that offer complimentary bikes for touring around town.

Adjacent to the prominent King and Queen hotel is the West End Precinct where industrial grunge meets sophisticated luxe. Home to a variety of casual dining restaurants, there’s a swank cocktail bar called Itch, a couple of high-end boutiques and Ozone, a cafe and roastery with an irresistible aroma that brings in a steady stream of regulars. 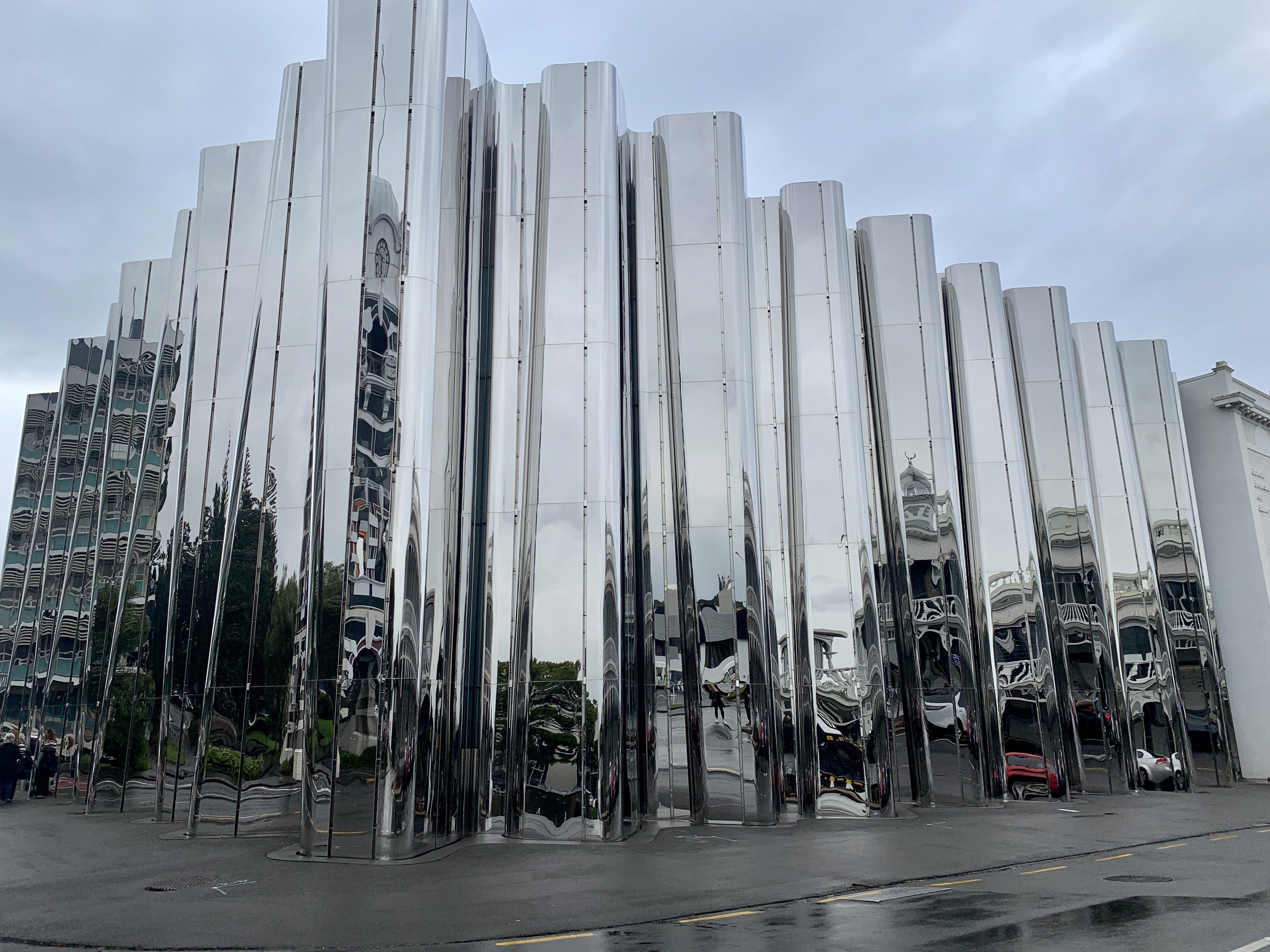 The centre of town is relatively flat and easy to navigate. Several art galleries featuring sculpture and ceramics from emerging and established New Zealand artists are interspersed with engaging street art discreetly tucked down the alleyways.

Puke Ariki Museum has its own Artists in Residence gallery and would have to be one of the most user-friendly museums I’ve seen. Built on two floors with a viewing deck that overlooks the water, the museum focuses on the arrival of European pioneers, the history and geology of Mt Taranaki and Te Takapou Whariki Gallery that features original artefacts, canoes, wooden panels, tools and weapons that were found in the region.

There is also a comprehensive library for those wanting to learn more about the history of Taranaki.

The curved stainless steel Len Lye Centre and Govett-Brewster Art Gallery reflects the changing landscape of art in New Zealand.
The first hall features a Len Lye installation called Sky Snakes, that twists and twirls from the ceiling. The kinetic art-in-motion sculpture comprises spinning chains that rotate and dance hypnotically in mid-air. The multi-tiered space has various exhibitions that include art, sculpture, film and just about anything that challenges the norm. Contemporary Auckland artist Brett Graham’s large-scale installations will feature in early December.

A short walk will take you to the waterfront and the comprehensive coastal pathway that officially ends at Bell Block Beach. The flat terrain makes it ideal for walkers, runners, pram pushers and cyclists, with seats strategically positioned to watch the surfies. A bold red 45m Wind Wand honouring New Zealand artist Len Lye, curves over the boardwalk, gently oscillating in the wind.

A short walk in the opposite direction leads you to another significant sculptural work, Light on the Land, by New Zealand artist Howard Tuffery, featuring a mirrored wave that reflects the ocean, the land and every image in its vicinity. The artist’s point being that we need to prioritise conservation and sustainability and feel connected to our land.

The afternoon agenda involved some serious exercise. After a brief detour to Mitchell Cycles, I hit the coastal walkway. The track is well signposted and switches from the coast to meander through farmland with cows grazing in paddocks alongside.

I cycle over the impressive Te Rewa Rewa bridge that stretches across the Waiwhakaiho River where a group of fisherman are crouched in the shallows, whitebaiting. The giant white steel structure with ribs skewed to form an arch resembling a whale skeleton makes an impressive landmark.

A quick stop to refuel at the retro Federal Store in Strandon, a quirky cafe which pays homage to the original jam and cream doughnut, paired fittingly with a glass of fresh mandarin juice. 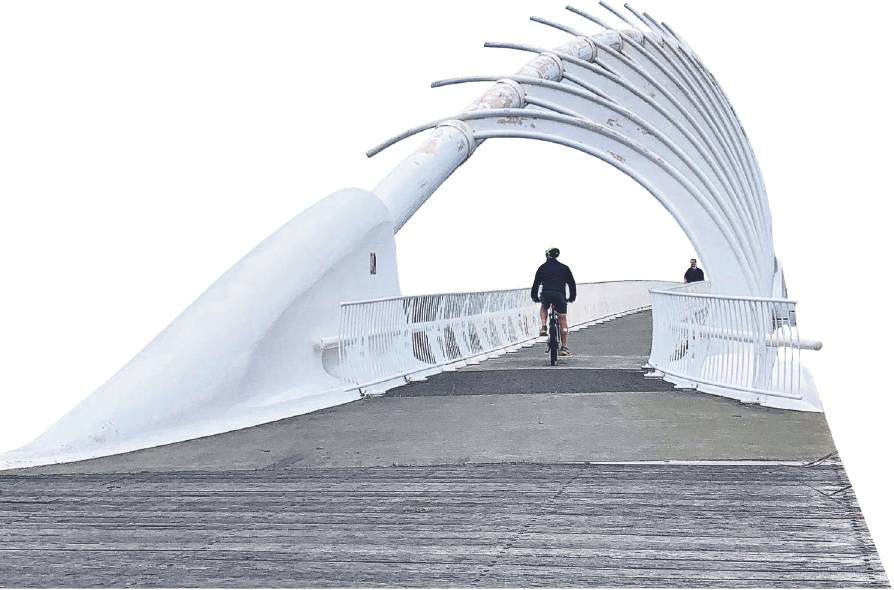 The impressive Te Rewa Rewa bridge stretches across the Waiwhakaiho River. The giant white steel structure resembles a whale skeleton.
Cycling back through town towards Taranaki Port, there are plenty of places to stop along the way. I’m on a mission to get to Paritutu Rock, an ancient volcanic crater that hovers in the distance overlooking Ngamotu and Back Beach.

The cycle path in this direction is less scenic, requiring you to cross the train tracks at various intervals.

Upon reaching the Port, best ignored unless you’re a fan of shipping containers, I cycled to the foot of the ‘‘rock’’ which I’d describe more along the lines of a mini-mountain.

I’d been assured that a quick jaunt uphill would be rewarded with stunning views from the top. The 100m-high vertical rock climb starts initially on a staircase, but two-thirds of the way it transitions to a rock climb with a chain for support. Minutes from the top it started to rain, making the climb a little more slippery and with reduced visibility.

The views from the top are worth a little sweat, with the Sugar Loaf Islands being a definite highlight. But an annoying low-lying mist hindered any clear views of Ngamotu beach and the mountains beyond.

New Plymouth has deservedly gained international recognition for its beautiful public gardens. The first on my list is Tupare, a once privately owned home and garden that belonged to the Matthews family. After purchasing the land in 1931 with just a single tree on the property, the family began the task of clearing extensive gorse and planting shrubs. Tupare now has thousands of native and exotic specimens, including rhododendrons and redwoods that are understood to be some of the largest in New Zealand. The family home has recently been restored with family photographs, books and memorabilia.

Pukeiti garden is home to more than a thousand different species of rhododendron.

Visiting Pukeiti in spring is akin to landing on a magical island, with secret pathways interspersed with lush native rainforest and a kaleidoscope of coloured rhododendrons bursting into flower. Rhododendrons originate from the Himalayas and southwest China and there are flowering plants in every imaginable colour and shape. I spotted tuis suspended on tree branches gorging drunkenly on the flowers.

The garden is home to giant northern rata, rimu, tawa, mahoe and miro, with layers of fern and other smaller native plantings.

Pukeiti gardner Craig Paterson says their comprehensive control programme in conjunction with Predator-Free Taranaki has been hugely successful. Future plans include a cycleway with walking trails through the native forest and a fitness trail in the Valley of the Giants. Families can book and stay at the recently built Piwakawaka family hut.

The next stop is Pukekura Park and fernery, in the centre of New Plymouth. The 52ha park and botanical gardens were established more than a century ago with native trees and exotic specimens. Flat pathways run either side of Pukekura’s main lake.

The fernery and colourful display houses are linked via earth tunnels and house a unique collection of native orchids and tiny exotic plants unlikely to be found in the wild. A quick trot across the red Poet’s Bridge gives you an opportunity to see the native gardens on the opposite side. One of New Zealand’s oldest and largest puriri trees stands erect with gnarly roots at the entrance to the park. The Tea House on the lake is worth stopping and taking time out to enjoy Pukekura’s natural beauty and bird life. 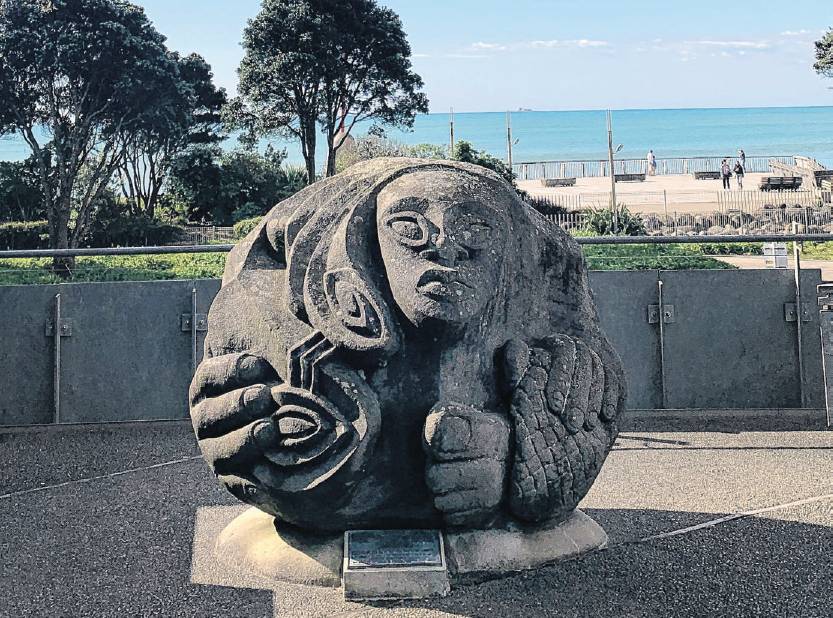 One of the works at Puke Ariki Museum.

Unfortunately there was not time to visit the smaller and in their own way equally impressive gardens that New Plymouth is renowned for, but they’re on my radar for next time.

I hit Highway 45, commonly referred to as the Surf route, connecting 100km of coastline between New Plymouth and Hawera. Oakura is a popular little surf town and I pulled over for a delicious vegan brunch at Lemonwood. There are a multitude of surf breaks and scenic spots along the wild west coast where you can turn off the main highway to find sandy beaches and rocky headlands.

There are several great walks in the region from Okato, Opunake and Hawera, but given the weather was squally, I drove instead to Cape Egmont Lighthouse at the western tip of Taranaki. After a blustery walk to the top I was compensated with a view of the coast, minus the surfies who will be swarming in summer to find the perfect wave at Stent Road or Fitzroy Beach.

I’d managed to occupy every minute of the long weekend doing something new and adventurous and yet there was still so much to see.

It also became apparent that with the exception of the Govett-Brewster Gallery, there had been no entry charges for the museums, galleries or any of the gardens I visited.

Where else in the world can you find natural beauty, art and culture without being charged a cent?

It’s no wonder New Zealand is high on the global wish-list and most importantly, in this part of the world, there’s great coffee every step of the way.