There is of course a ruined castle, Castle Tioram. Photo: Getty Images
The tiny Scottish island of Eilean Shona inspired the author J.M. Barrie, helping to frame the world of Peter Pan. Time there confirms some dreams do come true.

As we skim across Loch Moidart in our speedboat to reach Eilean Shona, it’s easy to see why this remote island was the inspiration for J.M. Barrie’s Peter Pan. In the fading light there’s still an air of fantasy about the place; a low, black craggy line appears ahead of us, fir trees are ringed in mist and a ruined castle in the bay — Castle Tioram — is outlined in the dusk.

When Barrie spent a summer here in 1920, working on the screenplay of the silent film adaptation of his play-then-novel, he knew he’d found the perfect location for his children’s classic. Nothing has changed and first impressions aren’t a million miles from Wendy’s in the Disney version when she first spies Neverland through the clouds, lush and green with translucent waters and pale sand.

Thanks to teething problems on the new Caledonian Sleeper service, our journey isn’t quite as dreamy as Peter Pan’s ("second star to the right and straight on ’til morning"). If only. After an hour’s delay we finally leave Euston, London at 11pm, changing in Edinburgh about 3am. It’s amazing, though, how a change in scenery can lift your spirits. We enjoy free croissants and coffee in the first-class buffet car (by way of apology for the delayed journey), watch the darkness melt away and the sun rise over the epic sweeps of the West Highlands. We reach Fort William by 11am and from there it’s a 50-minute taxi ride to the ferry point where we meet our boat.

There has been a week of feverish planning at the prospect of four days cut off from the world with no car, no roads, no local shop and, more worrying, no pub. Anxious WhatsApp messages are exchanged with the rest of our party. Where can we shop before we leave civilisation? How on earth will we transport enough alcohol to last a party of eight for four nights on a small speed boat? (All that walking makes you thirsty.) Will we need an extra vessel for liquid provisions? I follow my brother’s advice: "Stick to spirits, forget beer — think high alcohol, least volume."

We needn’t have worried. We are met at the ferry point by the two island managers, who swiftly load our provisions into the hull of two speed boats before whisking us across the water.

As we’re a large-ish party — three couples and assorted offspring: one 20-something, two teens and a 9-year-old — we’re lucky enough to stay in the main house. Originally owned by seafarer Captain Swinburne, it started out as a hunting lodge in the 19th century. Obsessed with the many different types of pines he saw on his travels, he grew the most diverse pine plantation in Europe here on the island.

Expanded over the years, the house now has 12 bedrooms replete with four-poster beds and claw-foot baths, a kitchen with two pantries, a snooker room lined with Grayson Perry prints, and a decent dartboard, too. At first we keep bumping into each other in the rambling corridors: "Can you remember where that marbled bathroom is? I’m sure it was around here somewhere. How do you get to the kitchen again?"

The house is shabby chic, eclectic, a mix of old and new, with brightly coloured walls and murals, antique rugs, conceptual art and oddities everywhere you look. There’s even a walk-in closet of dressing-up clothes if you fancy connecting with your inner Peter Pan.

When we stay, the main house is still self-catering, but that was about to change so that all meals would be cooked for you and served in the dining room that seats 20. 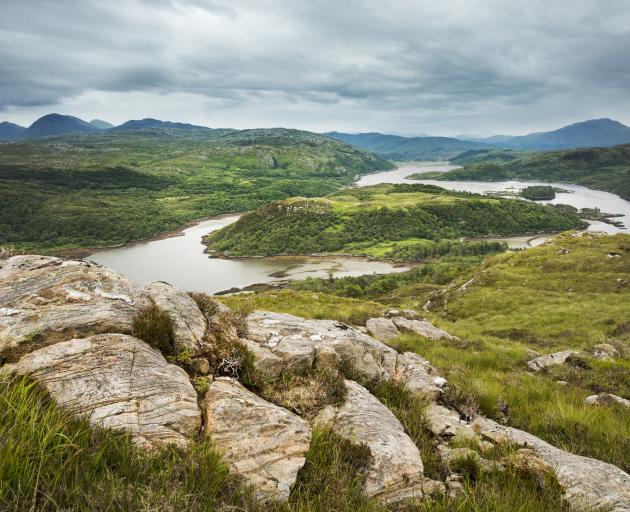 J.M. Barrie's wild rocky romantic island. Photo: Getty Images
For such a small island, there are plenty of other options. Scattered around are a string of simple whitewashed cottages, as well as a converted schoolhouse and bothy. Stylish and comfortably restored inside and out, they have great views and are remote enough to feel like you have the island to yourself.

There are plenty of activities to keep you occupied. We spend a morning kayaking in the shallows of the bay and swimming, or rather floating on the water, in wetsuits. In the summer, there is mountain biking and cycling, and more recently there have been writing retreats run by established authors.

Staying at the main house is a reminder of how privilege is sewn into the history of Eilean Shona. Back in the 1930s, it was a wedding gift to Lady Howard De Walden from her husband-to-be. Since the mid-’90s, Vanessa Branson (Richard’s sister) has owned it, renovating each of the eight properties and developing the island as a nature reserve — car and pollution-free.

In the elegant drawing room, with a grand piano, marble fireplace and creamy swagged curtains, a photo album reveals Princess Eugenie has been a guest.

We spend four hours on our second day trying to locate the secluded beach with turquoise water and icing-sugar sand that we’ve seen in photos. There’s one main path that circles the 800ha island and smaller paths leading off it, but they can be tricky to stick to when it’s waterlogged.

We stride off in the drizzle, enthused by the colours of the scenery: russet leaves, bright yellow lichen and a carpet of emerald green moss in Captain Swinburne’s pine forest. As we head inland we spot our first eagle circling. But two hours later we’re getting hungry.

The terrain becomes more marshy and the teenagers are beginning to whinge. Suddenly there’s a loud scream behind us. We turn to see a figure lying in the heather, stranded up to her knees in mud.

"Bet this didn’t happen to bloody Princess Eugenie," says her father, hauling her out by the shoulders and leaving her boots behind.

Shortly after, we’re rewarded with a sight of the elusive beach just around the headland. Some of us are brave enough to take a dip in the steel-grey water, the rest huddle on a rug drinking scotch and tea from a Thermos.

We trudge home in the dusk and two hours later we’re by the fire, enjoying the same view of Loch Moidart as Barrie did 100 years before when he wrote to a friend: "A wild rocky romantic island it is, too".