In the wake of the tall ships 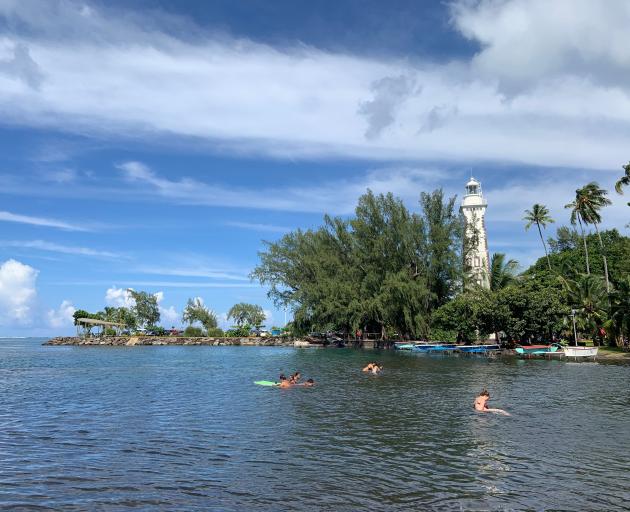 Point Venus, a maritime playground with a historic lighthouse tower. Photos: Neville Peat
Tahiti was James Cook’s Polynesian gateway to Aotearoa New Zealand 250 years ago. Dunedin writer Neville Peat went to the Society Islands in this sestercentennial Cook year to visit Tahiti and also Ra’iatea, another island in the group important to Cook and  formerly known as Havai’i.  Here is Peat’s Tahiti story, with Ra’iatea to follow. 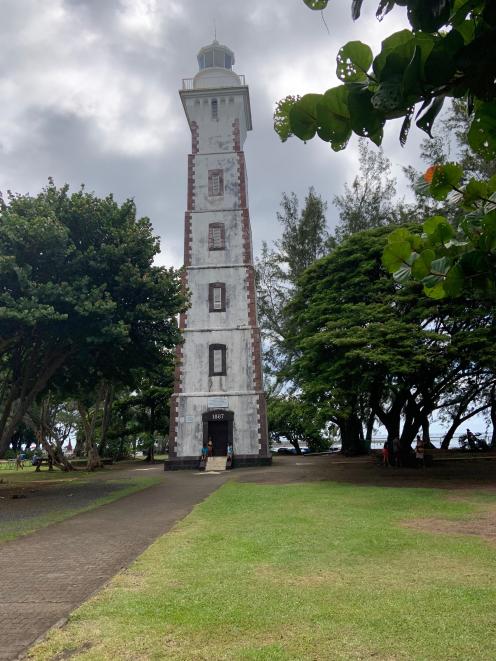 The Point Venus lighthouse tower, designed by writer Robert Louis Stevenson's father, Thomas, built in 1867.
Rising above the surrounding coconut palms and wispy she-oaks, the lighthouse tower of Tahiti's Point Venus has been signalling ships for 150 years - one of the South Seas' oldest maritime lights.

It serves as a beacon of another kind, too, illuminating early European history in Polynesia. For this was where, in 1769, James Cook's Endeavour expedition observed the trajectory of the planet Venus across the face of the sun, an astronomical event important for advances in navigation and an understanding of distances and layout of the universe.

Point Venus, named by Cook, is a wooded park, river mouth and surfing beach with generous swathes of soft dark-grey sand. It graces the tip of a low-lying peninsula forming the eastern arm of Matavai Bay on Tahiti's north coast.

We wanted to swap the crowded footpaths, narrow streets and dingy back alleys of Papeete, the main town of Tahiti and capital of French Polynesia, for a more appealing South Seas setting. Point Venus, on the north coast 15km from downtown Papeete, beckoned for both scenic and historical reasons.

At the same time, we were keen to experience something of ordinary Tahitian life. So we boarded public transport, an ageing bus, and with it came blue smoke, a noisy gearbox and seats sticky in the humid heat. But it delivered plenty of human interest through a diverse group of passengers, commuters young and old, some probably unemployed. The helpful driver let us off at the township of Mahina and we walked the flat 2km to the famous point, passing a church, school and more than a few island dogs slumped in the afternoon sun. 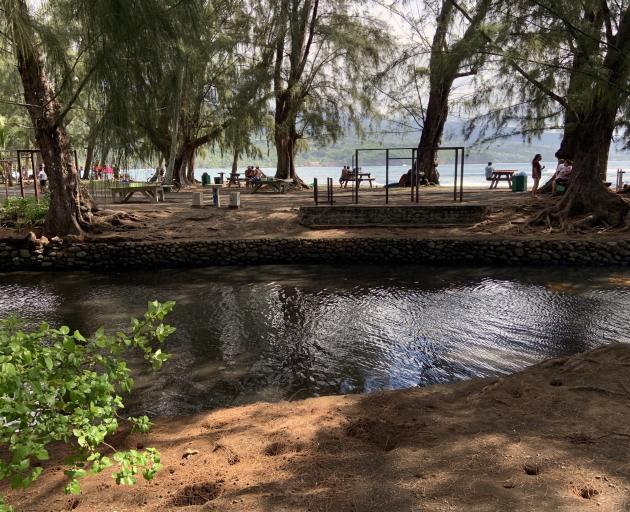 Picnic grounds near the mouth of the Tuauru River.
The dark Tuauru River flows sluggishly through the middle of Point Venus' shaded picnic grounds. James Cook is featured in information panels and there's a quaint memorial to him comprising a white sphere perched on an equally white column. The tapering square lighthouse tower, 32m high, draws the eye upwards to admire its coral and basalt stonework, with red blocks edging the four corners.

Four 18th-century European explorers dropped anchor in Matavai Bay, the first being English mariner Samuel Wallis (Dolphin, 1767) followed by France's intrepid Louis-Antoine de Bougainville on a record-making round-world voyage (La Boudeuse, 1768), Cook's first visit (Endeavour, 1769) and William Bligh before his crew's famous mutiny (Bounty, 1789). It was a revolving door of explorers, all borne on tall ships with three masts. The Tahitians were wary of the firepower and mysterious origins of these vessels and their pale crew, but at the same time, intrigued. So were the strangers.

Tahitian va'a and other boats at Matavai Bay in 1773, a sketch by William Hodges, artist aboard Resolution on James Cook's second Pacific voyage. Image: Supplied
Bougainville wrote: "I thought I had landed in the Garden of Eden." He gave the island not only a rave review for its attractive, approachable women but also a name - New Cythera - after the Greek island associated with the goddess of love, Aphrodite. He also took on board a young man, Ahutoru, who became the first Tahitian to visit Europe.

The naval careers of Wallis, Bougainville and Cook overlapped in French Canada in the previous decade, the 1750s war between France and Britain. Wallis commanded one of the Royal Navy's ships in the attack on Quebec, and Bougainville was an officer on the French side. James Cook was there, too, distinguishing himself as a cartographer. Rising through the ranks from lowly able seaman, he was made lieutenant in 1768 and hand-picked for the 1768-71 Pacific voyage of exploration.

Endeavour, following Wallis's log and co-ordinates, reached Tahiti via Cape Horn on April 12, 1769, seven weeks before the Venus transit date predicted by Royal Society astronomers. Like the European explorers before him, Cook made Matavai Bay his base.

Mahina school mural near Point Venus.
Under astronomer Charles Green's instructions, a timber fort was constructed at Point Venus to protect the observatory from possible disturbance by the Tahitians. Despite an armed guard, the astronomical quadrant disappeared one day. Green and the expedition's chief scientist, Joseph Banks, assisted by information from a chief, immediately gave chase and tracked down the equipment at a village 6km away.

On May 20, two weeks before the heralded transit, the local people marked with rituals and feasting their own astronomical event - the sinking below the horizon of Matari'i, the constellation Europeans knew as Pleiades. In East Polynesia, its setting signalled the beginning of the winter season and scarcity of food. (Ancestors of Maori brought this tradition to Aotearoa, where the reappearance of Matariki in the dawn sky in June or July, depending on the Maori lunar calendar, marks the start of the Maori New Year.)

Fulfilling British Admiralty instructions "to observe the passage of Planet Venus over the Disk of the Sun", Cook opted for three observatories - two on Tahiti (north and east coasts) and one on the neighbouring island of Mo'orea. He already had astronomy experience. He was well versed in celestial navigation, with sextants in use by this time. He also observed a solar eclipse two years earlier and wrote a paper on it that impressed the Royal Society. 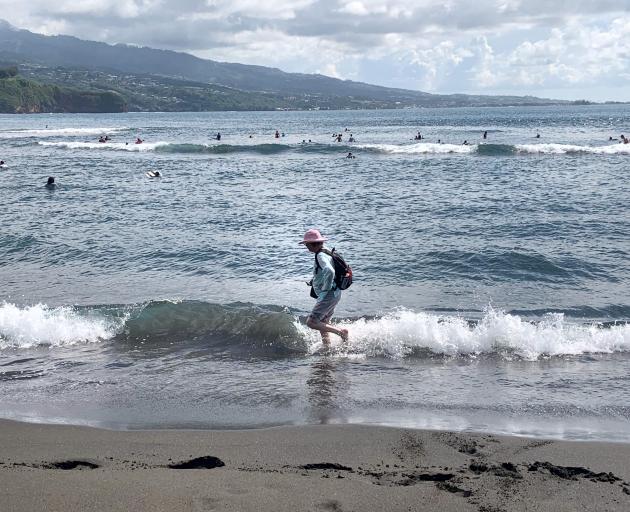 Matavai Bay and the beach at Point Venus.
The third of June dawned clear. Venus, often the brightest object in the southern night sky after the moon but a tiny black dot against the sun, was able to be tracked, although not with the precision they had hoped for because of what Cook described as shading around the planet caused by its atmosphere.

No traces of the Point Venus fort or observatory structure remain but memorials and information panels detailing European history at Matavai Bay abound. A hundred years after the European explorer period, plans for a lighthouse were drawn up.

Thomas Stevenson, the father of Scottish novelist Robert Louis Stevenson, was the designer of the lighthouse tower. Built and equipped in 1867-68, it was electrified in 1963 and 7m was added to its height. 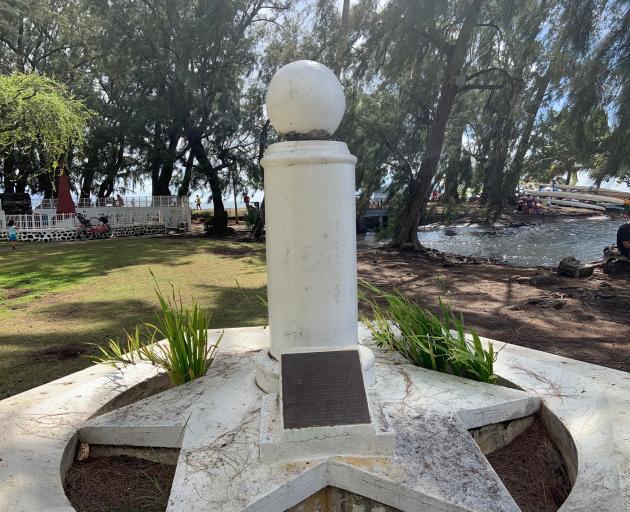 The memorial to James Cook at the Point Venus woodland park.
It was a Tuesday when we visited Point Venus, admired the lighthouse, paddled in low surf and savoured the 30 degrees heat - the vibrant greenery of the park such a contrast to downtown Papeete. It was relatively quiet space, too. There were swimmers, surfboarders and families having picnics. Outrigger canoes, known as va'a (waka in te reo Maori), were lined up on the shore for hire but there were no takers this day.

In the mid-afternoon sun we walked back to the main road and happened upon a bus stop - no signs, but local knowledge helped - for the return trip to Papeete to rehydrate.

In recent years, by Papeete's port, a waterfront park has been further developed as a recreational space. It ranks alongside the town's colourful market as a visitor attraction. Newish features include a tribute to an 18th-century Tahitian high priest and star navigator, Tupaia, whom Cook befriended around the time of the transit of Venus. Their friendship would become crucial to Cook's search for a landmass southwest of the Society Islands, partly and roughly mapped by Dutch explorer Abel Tasman the previous century but yet to be feel European feet.

For centuries, Polynesians had voyaged widely across the Pacific, settling an area of ocean larger than Africa. Soon Cook's voyaging would give Europe a fuller picture of the Pacific, and Tahiti was a pivotal stepping stone for him.