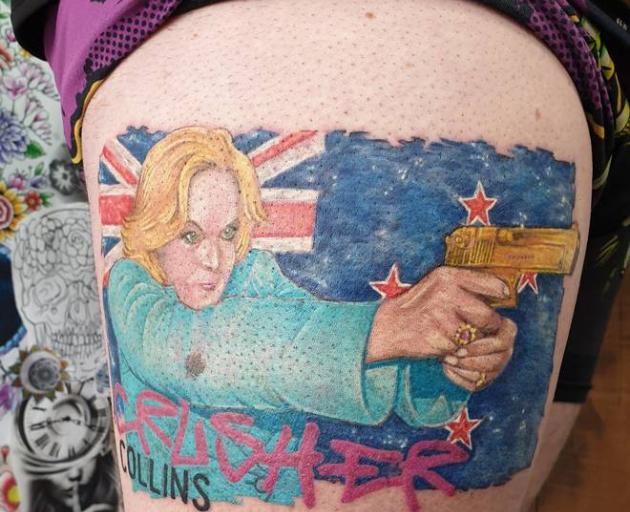 Judith Collins as you've never seen her before. Photo / Dave Mouat
National Party leader Judith Collins says she is "extremely" flattered at being depicted in a Bond girl tattoo on a loyal supporter.

"I think it's great - I hope it becomes a trend," she told the Herald.

She was referring to a tattoo showing her likeness - decked out in an aqua-blue suit jacket pointing a golden gun as she looks on fiercely.

The tattoo was created by Morrinsville tattooist Dave Mouat, of Famous Dave's Tattoo Studio based in Morrinsville, for a loyal National Party follower.

The design was inspired by the 007 James Bond films and, more importantly, the Bond girls in them.

Asked how she felt about being referred to as a Bond girl, Collins laughed: "That is extremely flattering.

She said the man who got the tattoo - Nik Given, from Te Aroha - had emailed her asking whether she might consider coming to Te Aroha to sign it especially.

Given said he and wife Mel were strong supporters of the National Party. 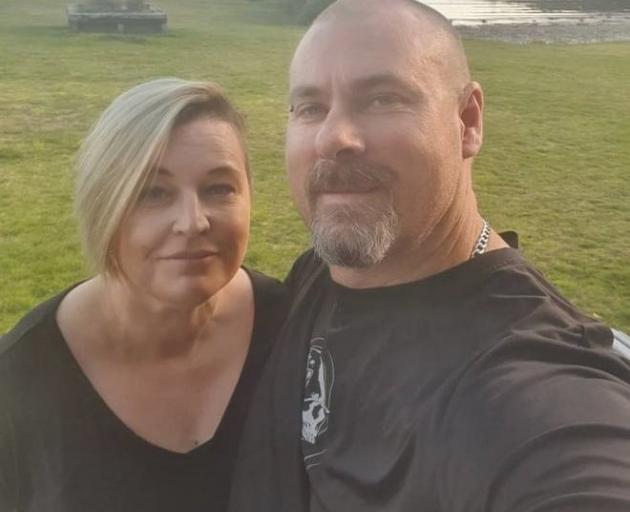 Nik and Mel Given. Photo: Supplied via NZ Herald
GIven told the Herald the idea for the tattoo on his leg started last week while his wife was getting a tattoo at the studio.

"She wanted to get Simon Bridges but I wouldn't let her," he laughed.

"She just got a small moon instead."

It was also inspired by a tattoo of director general of health Dr Ashley Bloomfield that Mouat had tattooed on a woman whose highlight during Covid-19 lockdown had become Bloomfield's daily 1pm situation updates.

The couple, owners of Given Fabrication Services, did not side with the current Labour Government's regime and so it was a show of support for a change of leadership.

"It's a stand against what is happening. I've seen so many struggles ... small businesses have had such a rough deal since March.

"Enough of the touchy-feely be kind strategy," he said.

Given's Collins thigh tattoo joins many others - including portraits of composers Mozart and Beethoven. There is also the odd skull in the mix.

Put to him that there had been a number of different National leaders the past few months - and would he have therefore considered getting them tattooed, he said Bridges would have been a possibility.

"Definitely not" Todd Muller, he said.

There may, however, still be another politician up to be tattooed, possibly on his other thigh - ACT Party leader David Seymour.

"He's just a bit different and he's out there and says what he says and does his weird dancing," Given said.

"We just need a bit of guts and balls now."

One idiot creates the so called master piece and one wannabe PM thinks it's brilliant.

I'm not usually the sort of person to pass judgment on someone else's choice of tattoo, but this one joins the long list of "no regerts" (sic) examples!