By Mike Houlahan
0 Comments
Today, the Otago Daily Times continues its series of interviews with the leaders of the political parties now in Parliament. In part two, Green Party co-leaders James Shaw and Marama Davidson talk to Mike Houlahan about how they plan to keep Dunedin a Green city, aluminium manufacturing, and power — both political and electrical.

Dunedin has long been a stronghold for the Green Party, but the outcome of this election will almost certainly result in no Green MP being resident in Dunedin.

The party’s strength in the South stems from a strong campus branch and has been bolstered in recent years by the presence in Dunedin of former co-leader Metiria Turei and now retiring MP Gareth Hughes.

In 2014, almost 9.6% of the total Green party vote nationwide came from Waitaki south, and in 2017 it was nearly 8% — important percentages for a party which lives or dies by the 5% threshold.

However, barring a phenomenal upset in a local electorate seat or the Greens polling very much higher than at present, none of the party’s candidates in the region are likely to be settling into Parliament’s green leather seats.

"Dunedin has a Green mayor, so the idea that we are losing our representation down there is not well based," Greens co-leader James Shaw said.

"If people in the South want Green MPs to represent them, then they should party vote Green ... Scott (Willis, the Green Taieri candidate) is reasonably highly placed on our list, and while I know on current polling the chances of getting him in are slim, that’s not to say that our polling won’t shift in the next few weeks.

"It has before, but it also positions him well for future things."

Polling is something Mr Shaw has mixed feelings about; he came to Parliament in 2014 after consistently high polls when the party recorded its second best election result, but in 2017 he gave the Green’s adjournment debate speech having just been handed a poll saying the party was well under 5%. 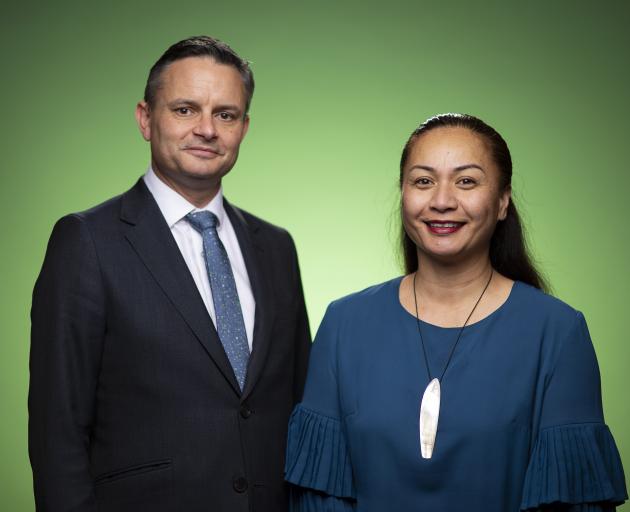 The numbers look a touch better three years on, but co-leader Marama Davidson said she and the Green campaign team were well aware they were trying to defy history — smaller parties have consistently fared poorly in the election after a term as a government support party.

"We have polled consistently around and above that 5% threshold, which is absolutely encouraging, and I think it goes to both what we have managed to get done in government as well as being very clear about how we would like to go further.

The co-leaders’ optimism perhaps reflects the fact the ODT spoke to them before details of Mr Shaw’s advocacy on behalf of a Green school in Taranaki became public.

Mr Shaw’s backing ran contrary to party policy, and also raised questions about how stringently he had examined the proposal.

It remains to be seen whether Mr Shaw’s profuse apologies and statement that he would not make the same decision again are enough to stave off serious harm to the Green’s electoral prospects.

Reviewing the party’s support agreement with Labour, the Greens have not achieved everything the party sought but its leaders felt initiatives such as the Zero Carbon Act and the ban on oil and gas exploration represented a solid three years.

"There was this view that you should never let the Greens near the levers of government, they will destroy the country, they’re crazy, they’ll destabilise the Government," Mr Shaw said.

"If you look at our actual track record we have been a responsible partner in government, we have delivered an enormous amount and way more than we actually anticipated when we started even, and at the same time we know we need to go further and faster than we have been able to do in the past couple of years."

Ms Davidson acknowledged there remained a tension between those who felt the Greens had been too influential in decision-making and those who felt the party should have made the Government do more, especially on on environmental policy.

"We all saw the climate strikers, we all care about freshwater, it is actually New Zealanders who want to push us, both the Greens and the Government, to go further and faster, and that accountability is important."

Water — specifically the destiny of Lake Manapouri — was the issue which more than any other created a green political movement in New Zealand.

Forty years on, the Green Party now has to wrestle with the future of the Tiwai Point aluminium smelter — the facility for which Manapouri was dammed to generate electricity.

Mr Shaw said with his Climate Change Minister’s hat on, part of him would like to see the smelter remain open so that New Zealand had to take responsibility for what it consumed.

However, with the closure of the plant announced by owner Rio Tinto, Mr Shaw was excited at the prospect of more environmentally friendly alternatives replacing it.

"We know there are some real opportunities to be onshoring big data warehouses ... electricity and coal are in plentiful supply down there and it is a lot cheaper to string a fibre optic cable across the Cook Strait than it is a transmission cable," he said.

"There are things that we can do to diversify and support industry down there, and actually utilise the fact that we have got this incredible resource in the area, if we can retain a lot of those engineers involved and involve them in new industries down there."

There is also the possibly vexed issue of building new hydro generation infrastructure — something with fiscal and environmental ramifications.

In July, Energy Minister Megan Woods announced the Government was allocating $30million to explore the feasibility of a pumped hydro scheme at Lake Onslow, between Roxburgh and Alexandra.

Mr Shaw said the interim climate change commission had recommended two years ago that if the Government wanted to achieve 100% renewable electricity, pump hydro should be considered.

" I think it is absolutely worth investigating and I am glad that we are resourcing that investigation properly, but there are some quite significant local environmental effects that will have to be considered and mitigated as part of that ."

"I think that the amount of money we are putting into the investigation means we will be able to properly assess both sides of that, it won’t be a half-arsed job."

Like all parties, the Greens have had to recalibrate their election strategies with Covid-19 still a present danger.

While the pandemic is utterly unwelcome, it has resulted in some gains for the Greens, with policies such as green jobs being accelerated to meet the potential need of workers laid off due to Covid-19 to retrain.

While economics were certain to be a major election talking point, Mr Shaw said the Green philosophy of sustainability meant it brought a unique perspective to the economic recovery picture.

"All that liquidity that we are pumping into the New Zealand economy has to be repaid by a future generation of taxpayers, who are also going to be confronted, whilst they are paying that, with climate change, a housing crisis that hasn’t gone away, poverty which hasn’t gone away, the cost of the Three Waters infrastructure rebuild.

"What we are saying is, everything we are talking about, whether it is the poverty action plan, the clean energy plan, the other stuff we have got coming up, is the Green new deal.

"We need to be putting every dollar we can of that stimulus to work solving the long-term challenges so that future generations don’t have to pay twice: you can actually do two things at once."