Nearly 500,000 special votes still need to be counted, but the margin between the support and opposition is so wide that the referendum is likely to succeed. Stock photo: Reuters
A strong majority of New Zealanders have ticked "yes" in the voluntary euthanasia referendum.

Results show 65.2 per cent voted for euthanasia, compared to 33.8 per cent against.

Nearly 500,000 special votes still need to be counted, but the margin between the support and opposition is so wide that the referendum is likely to succeed.

Once the official result is confirmed on November 6, it will be a year before New Zealanders get access to assisted dying. 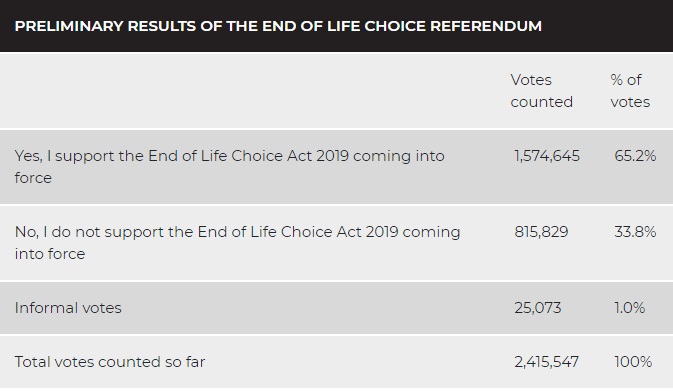 The End of Life Choice Act has already passed and the referendum is binding.

If special votes confirm a majority "yes" vote, the law would come into force on November 6, 2021.

The delay is to allow time for systems to be updated, and for new oversight committees to be set up - including a group which would develop a list of doctors, psychiatrists and pharmacists who are willing to take part in assisted dying.

Because the law has already passed through Parliament, no further changes could be made. But it could be amended by future governments. And it would be reviewed after three years, followed by regular five-yearly reviews.

How would it work?

Terminal patients with six months to live would be able to request assisted dying. They would have to be aged 18 or older and be a permanent resident or citizen.

They would also need to be:

• in an advanced state of irreversible decline in physical capability

• competent to make an informed decision about dying

And they would not be eligible on the basis of age, mental illness, or disability alone.

What is the process?

To get access to assisted dying, a patient would need the approval of two doctors. A GP could refuse to take part, but must tell the patient they can ask for the name and details of a replacement doctor.

The doctors must then carry out a number of checks - such as ensuring a person understands their other options and that they can change their mind at any time.

If either of the doctors had any concerns about the patient's competence to make a decision about ending their life, they would have to refer them to a psychiatrist for a third opinion.

A person would not be able to write an advance directive that they want an assisted death at a later date. And if at any point a doctor suspects a person is being pressured, they would have to stop the process.

Once approved for the procedure, the patient would be able to choose the method of taking the lethal dose and whether they want to take it themselves or have a doctor administer it. They also choose a date for their death, and if they change their mind they can set a new date within a timeframe of six months.

Is there a watchdog?

Three new roles would be created to run the new euthanasia regime and provide oversight.

A Support and Consultation for End of Life in New Zealand (SCENZ) Group would draw up a list of willing doctors and psychiatrists and would also prepare standards of care and advice on the medical and legal procedures.

An End of Life Review Committee would check reports on assisted deaths to make sure they complied with the law, and flag any concerns to a Registrar.

The Registrar would check that the processes required by the law had been followed, and would also be in charge of hearing complaints and referring them to the appropriate agency - such as the police or Health and Disability Commissioner.

Naturally, 'willing psychiatrists' will examine the mental competence of candidates. They won't just chart something. But, seriously, assisted dying won't be a 'given' if clinicians apply professional rigour.

A really bad day for NZ. How long before doctors are not allowed to opt out even though euthanasia is against the Hippocratic Oath. Politicians have always lied about how things will be implemented. The elderly should be worried as well.