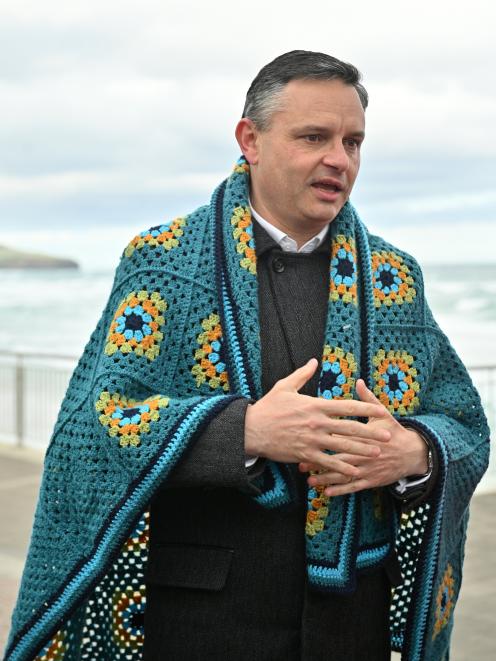 Green Party co-leader James Shaw rugged up with a crocheted blanket given to him by a party supporter as he discussed the party’s oceans policy at St Clair last night. PHOTO: LINDA ROBERTSON
You would be hard-pressed to find a bigger contrast.

Dunedin hosted two sets of political party leaders last night, but their respective roles were definitely where the similarities ended.

The latter was addressed at a public meeting at St Clair, with about 25 people present, where he said the party’s proposal to protect 30% of New Zealand’s oceans had got a lot of attention.

It would be good for the ocean, humans, the fishing industry and fish, he said.

"We've got a very good chance of being able to do this, so long as the next government is the configuration of what we're all hoping for."

He was pleased with what the Government was doing on freshwater reform.

"We've broken the back of that piece of work."

He later spoke about climate change at an event held at Otago Museum. 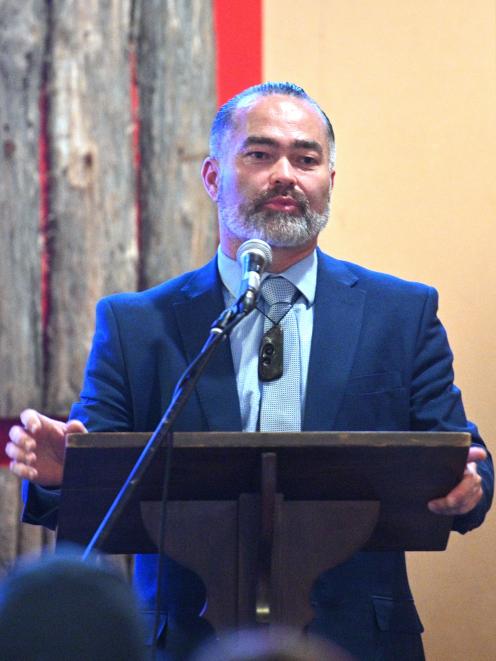 The pair shared their vision of New Zealand with about 120 people, and talked at length about the erosion of democracy they felt was occurring.

Mr Te Kahika repeatedly referred to messaging he described as "Covid-19 death fear", which he felt had been pushed on to New Zealanders.

He claimed Covid-19 was a bioweapon deliberately unleashed on to the population — a theory debunked by a broad range of experts.

He also repeatedly claimed Covid-19 was no worse than a normal winter flu.

Studies have found wide ranging mortality rates for Covid-19 depending on country, age and access to health care.

Mr Te Kahika painted a picture of a vast global conspiracy between everyone from Bill and Melinda Gates to Prime Minister Jacinda Ardern to use the pandemic as a cover to drastically remove people’s freedoms.

You can see why Billy and Jamie attracted the larger crowd. Free entertainment from a well practiced stand up comedy routine. I bet the 120 people who were there went away having had the best laugh they'd had for years. Certainly better than the nights offering on NZ television.