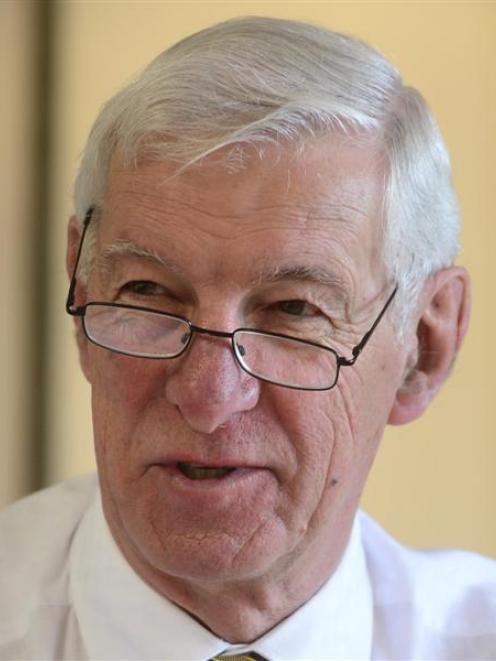 Denham Shale
A $9 million write-down in Delta's investments - including property at Jacks Point and Luggate - is partly to blame for a multimillion-dollar loss booked by the Dunedin City Council's group of companies.

It was confirmed yesterday the Dunedin City Holdings Ltd group of companies recorded a $5 million loss in the year to June 30.

Group revenue was up 3.7%, to $254.9 million, for the year, and the company had delivered $23.2 million in dividends, interest and subvention payments to the Dunedin City Council and Dunedin Venues Ltd.

However, a $7 million surplus became a $5 million loss once factors including the write-down of assets by two companies within the group - Delta and City Forests - were accounted for.

DCHL chairman Denham Shale told media that included a $7.5 million drop in the book value of Delta's properties at Jacks Point and Luggate, bought in 2008 and 2009.

Another $1.5 million had been shed from the value of small companies bought by Delta in the past "which now aren't performing as well".

That meant Delta posted an overall loss of $5.8 million for the year, compared with a $5.4 million profit the previous year.

Mr Shale was reluctant to criticise yesterday when asked if the property purchases had proven to be a mistake.

"I wouldn't call it a mistake, no. As we see it today, it could be called an unfortunate decision, but that is very much in hindsight.

"It's very easy in hindsight."

He also saw no need for the new DCHL board to investigate the rationale behind the purchases, saying they were "a fact that's there".

"We can't do anything to change it." 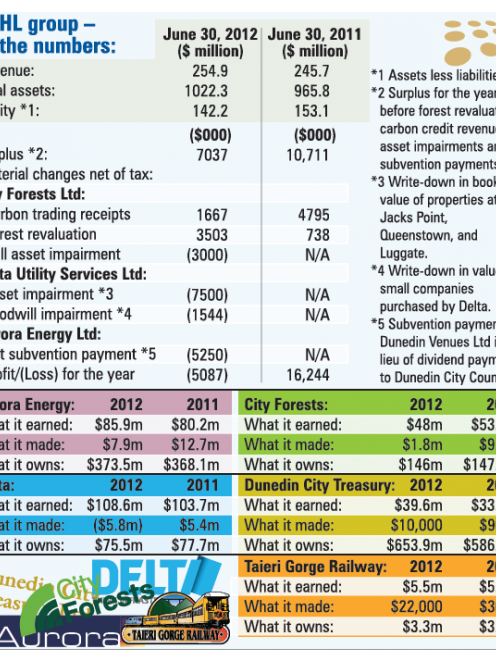 He blamed the result on the world economy, which had "bailed out" and taken property values with it, but said Delta had still benefited from infrastructure work at the subdivisions secured as a result of the purchases.

Delta also had a conditional deal to sell some of the properties, although Mr Shale would not divulge details yesterday.

Delta's write-downs were "significant and negative" for DCHL's results, but reflected only the value of the properties if a sale was forced immediately, his written report said.

City Forests confirmed a $3 million write-down in its timber mill operation at Milburn, having leased the plant to another company, Craigpine Timber Ltd, while increasing the value of its forests by $3.5 million.

Dunedin International Airport Ltd had benefited from a 9.9% jump in passenger numbers, and revalued its assets upwards by $18.6 million.

DCHL's 50% stake in the airport company meant it benefited by $6.85 million, but a $5.25 million subvention payment to Dunedin Venues Ltd - paid by Aurora Energy - counted against DCHL's final result.

Despite that, the DCHL board had felt it better to clear the decks by announcing the write-downs together, so the companies could move on.

"It's probably good to take all your bad news at the same time and look forward to the future," he said.

Aurora Energy, City Forests, Dunedin City Treasury and the Taieri Gorge Railway all remained in the black, although City Forests' profit was down from $9.5 million in 2011 to $1.8 million in the last year.

Mr Shale said that reflected lower carbon credit prices, log prices that had "fallen out of bed" and the general "disarray" of the industry.

Delta had also been hit by reduced infrastructure spending and slower-than-expected rebuilding activity in Christchurch, although that was beginning to change, he said.

Overall borrowing stood at $618.5 million by year's end, which combined both company and council debt. DCHL group's portion of that - about $240 million - was expected to remain stable.

Mr Shale said DCHL had committed to fund future distributions without borrowing, and was so far on track to do so - while still recording a profit - for the $15.7 million due in 2012-13.

The board had also made good progress on restructuring. New company directors were to be named next week and results of a review of the companies and their assets were expected by early next year.

Asked if the review could point to asset sales - if some companies continued to struggle - he said "it may do".

"We're looking at everything. It may be that you just change some emphasis ... who knows what the future will bring?"