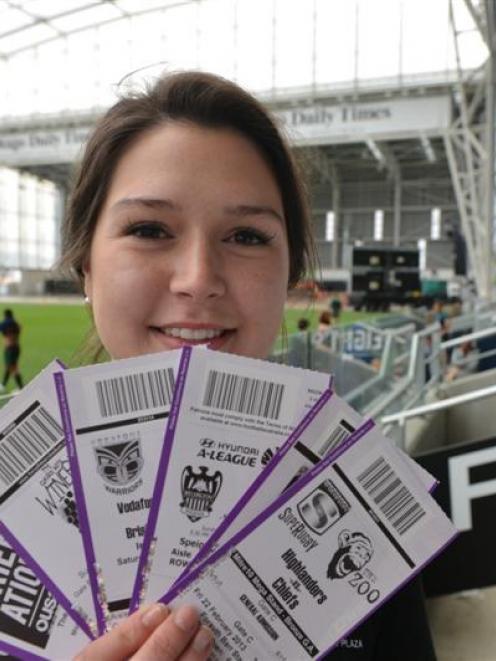 The Dunedin City Council's holding company also reported improvements, with a ''marked increase'' in after-tax profit to $7.87 million from the first half of the year, a 57% increase.

For the six months to December 31, 2012, Dunedin Venues Management Limited, which operates the stadium, reported a net loss of $690,000, compared to a net loss for the same period last year of $1.2 million.

After operating expenses of $2.80 million, a $2 million payment to landlord, Dunedin Venues Ltd, for six months' rental and a subvention payment from the council of $91,000 to cover interest on money advanced by the council, the company was left with a $690,000 loss.

The report said the period was one of consolidating the business model following the stadium's 11-month start-up period to June 30, 2012, in which the stadium recorded a $3.2 million loss.

The increased operating revenue reflected a better appreciation of the event market, and work done on building relationships with promoters was starting to show results, with major events like the Paul Simon and Aerosmith concerts confirmed, and more in the pipeline.

It noted a potential annual event fund from the council would provide an excellent resource to attract more events. The results also reflected a continued growth in membership and a ''major focus'' on cost control, resulting in a reduction in overheads and staff costs.

DVML chief executive Darren Burden said he was pleased with the improvement despite ''challenging conditions''. With the number of events at the stadium in the current second half of the financial year, he expected DVML would meet its forecast $300,000 loss for the 2012-13 year.

This financial year the council will contribute $7 million to the stadium in one form or another.

That figure is set to increase in the next financial year, subject to consultation on the draft 2013-14 annual plan, to $9.12 million, with the extra money largely funded from operational savings made at council. The money is allocated for accelerating stadium debt repayments.

With the financial boost from the council, DVML is forecasting small profits from 2014-15.

Denham Shale, the chairman of Dunedin City Holdings Ltd, the holding company for seven other council-owned companies, said that group's first half had been promising, with a ''marked increase'' in after-tax profits from $5 million in the same period last year, to $7.87 million, and revenue increasing 2% to $124.9 million.

The improvements were largely due to a relatively stable period in the normally volatile forestry sector, with City Forests Ltd reporting an after-tax surplus of $2 million, compared with $400,000 for the same period last year.

Aurora Energy Ltd traded well and showed a slight increase in surpluses after tax, while Delta Utility Services Ltd's after-tax surplus was down on the back of lower spending on infrastructure by local authorities in the South Island, with the exception of Christchurch, which had meant the company had to downsize its civil operations.

Taieri Gorge Railway Ltd's first-half loss increased to $488,000 on the back of constrained tourism growth in the South Island. A 4% increase in international passengers resulted in an after-tax profit increase for Dunedin International Airport Ltd, from $500,000 last year to $1.4 million.

Mr Shale said DCHL expected to be able to make its end-of-year dividend to council, cash and subvention payments, totalling just over $15 million.

He repeated the company would not be borrowing to pay the dividend this year, as per a new policy.

A report on a review of the company assets of the group, instigated after a multimillion-dollar shortfall in DCHL's planned dividends to the council was revealed in 2011, would be going to council in May, he said.