65 years wed - and a family of five generations 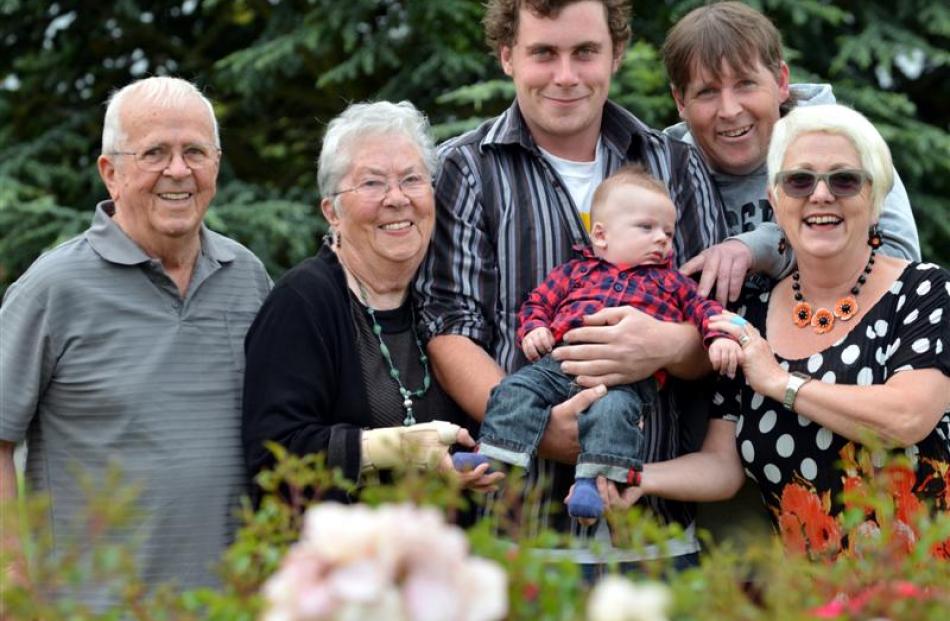 There was only one way Mosgiel couple Geoff and Helen Hinds intended celebrating their 65th wedding anniversary yesterday ... surrounded by family.

And thanks to the arrival of great-great-grandson Zepplin Wylie-Strachan three months ago, five generations of the Hinds clan could be on hand for festivities at the Brooklands Village community hall last night.

''I never expected we would have had five generations here. It's very nice isn't it,'' Mr Hinds said.

''We've been very lucky. We have a marvellous family.''

The couple, who are both 86, said there was no real secret to a long and happy marriage.

''But, I think working together to get what we wanted, rather than getting it all at once, and putting things together ... that's been the best bit, for me.''

Mrs Hinds (nee Cowie) said the couple met at a dance in the old Wembley Dance Hall, which was part of the Otago Early Settlers' Museum [now Toitu].

''We used to go every Saturday night. I saw him at a dance one night and thought he looked pretty good,'' she said.

Mr Hinds was even more enamoured.

They married at the St Kilda Presbyterian Church in 1948 and raised their four children, Rex, Keith, Judy and the late Terry, in Dunedin.

''We built a place up in Waverley and lived there for 40 years,'' Mr Hinds said.

''I can't believe it's been 65 years. It goes very quickly. The older you get, the faster it goes.''