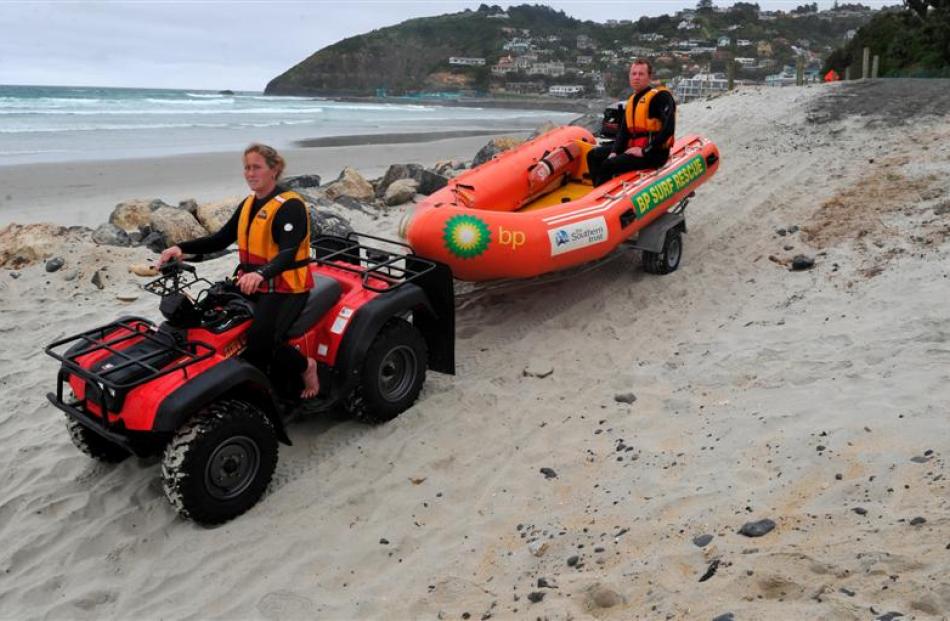 St Clair Surf Life Saving Club members say a new access ramp to the beach is even better than what they had before.

Work on the temporary ramp off the north end of the Esplanade at St Clair was completed late last month, after the old ramp the club used for taking its inflatable rescue boats on to the beach was demolished following storm damage earlier this year.

Water undermined the wall around the old concrete ramp, causing fill to be sucked out and parts of the Esplanade above to cave in.

The Dunedin City Council built the new $65,000 ramp, made from rocks and a compressed rock mattress, as a temporary replacement.

The ramp also provides public access to and from the beach, via the existing walking track.

''We've been wanting something like this for a long time. It's better than what we had. It's safer, and we can access the beach at high tide, which we couldn't before.''

The old ramp came off the seawall at a right angle to the sea. At high tide, it was often under water and, at low tide, depending on sand levels, was sometimes sticking up off the sand.

Mr Mason said he hoped it would become permanent, but you ''never know'' with Mother Nature.

The ramp was also providing good access to the beach for people, including the disabled and people with pushchairs, who had not been able to easily access that part of the beach for a long time after a ramp from the Esplanade failed.

Council roading maintenance engineer Peter Standring said the IRB launch ramp seemed to be working well so far, and council staff were pleased with it.

He said the wider structural assessment of the seawall had been completed and, as a result, several sections of the wall at the northern end that cracked during the storm would be repaired before the end of the year.

That would involve injecting the cracks with a special fill.

He said the northern section of the Esplanade would be closed at times over the next few weeks while contractors replaced the pavers and reinstalled street furniture.

Opus staff are still working on a report to the council about options for long-term protection of the wall.