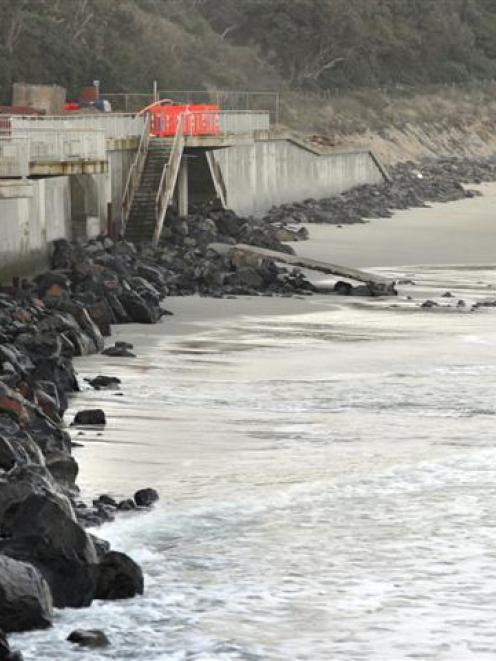 Sand has returned to Dunedin's St Clair Beach in recent days. Photo by Craig Baxter.
A decision on how best to protect St Clair beach and the sea wall will be based on expert engineering advice and not ''expert public opinion'', Dunedin Mayor Dave Cull says.

Council staff are expected to decide by the middle of next week which of three short-listed firms the council will hire to provide it with advice on the best engineering solution for the long-term protection of the beach and sea wall.

The danger of fluctuations in sand levels on the beach was highlighted last month when large sinkholes opened up in the Esplanade at St Clair.

The city has, as a result, to date spent $500,000 on stabilising the wall and Esplanade.

It is expected that work should be completed at the end of this week.

The holes appeared in the walkway when the level of the beach became so low during a period of high tides and heavy seas, that the bottom of the sea wall was exposed allowing waves to get underneath and suck out fill from behind it.

The numerous problems with the sea wall over the century since it was built have always generated a healthy level of public opinion on how to resolve them.

They have also resulted in many technical, engineering and scientific reports, studies and assessments of what the issues are with keeping the sea at bay.

Council roading maintenance engineer Peter Standring said all those reports would be provided to the chosen company.

It would assess them, conduct its own assessment, keeping in close contact with council engineering staff, and report back - probably within six weeks.

He expected staff would be in a position to report to the council by September the ''best engineering advice'' it had for a long-term solution.

Mr Cull said councillors would then have to decide what to do based on the expert advice.

There would be no public consultation on that decision, as such, although people would be kept informed of what was happening.

Mr Cull said it would be irresponsible of the council to base a decision like this on public opinion in a situation that required specific technical and engineering expertise.

He was not certain whether the council would be provided options, but expected any advice would be accompanied by expert reasoning.

He would not speculate on what would happen given options that were significantly costly to the ratepayer.

''Clearly, we have to weigh up what value we get from what we are going to spend.''