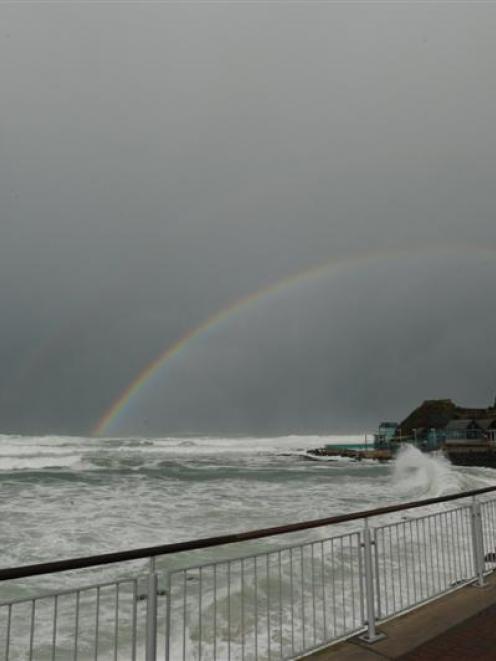 St Clair esplanade. Photo by Craig Baxter.
Dunedin City Council staff are to meet the company it believes responsible for a failed ramp and steps on the sea wall at St Clair, optimistic a settlement can be negotiated this month.

Any resolution is also expected to include a decision on new access to the beach.

Early this year, a report to the council said the sea wall had failed to gain a code of compliance certificate when it was completed in 2004, mainly because of concerns over the durability of a ramp and stairs leading from the Esplanade to the beach.

Since then, the ramp and stairs have been damaged in heavy seas six times, most recently in September last year when they were closed after concrete cracked, exposing steel reinforcing rods.

A council report after incidents in 2004 and 2005 found failures then were caused by a combination of construction and design faults.

Design consultant Duffill Watts and King and construction company Naylor Love agreed to strengthen and repair the ramp and staircase at no cost to the council, and the facilities were replaced in 2007.

The most recent damage appears to be in the same area, materials used to reinforce the ramp having failed.

Duffill Watts and King has merged with the firm CPG, which has not accepted liability for the failings.

The council is seeking resolution through a settlement, rather than court action, while also working with the company on redesigning the sea wall's steps and ramps.

He could not discuss details, saying he did not want to prejudice the outcome of the meeting, but said council staff would discuss "everything" with CPG at a meeting in mid-August.

The council has previously said the existing ramp and some of the existing stairs would be removed and a new set of stairs built at the St Clair Salt Water Pool end of the sea wall, but Mr Hamilton would not confirm that yesterday, other than to say design, location and a timeframe would be discussed at the meeting.

The council has tagged $250,000 for the beach access project this financial year.

He was "always optimistic" a resolution could be reached with CPG, he said.

"It's [the meeting's] a positive move forward, to resolve what has been a difficult issue."