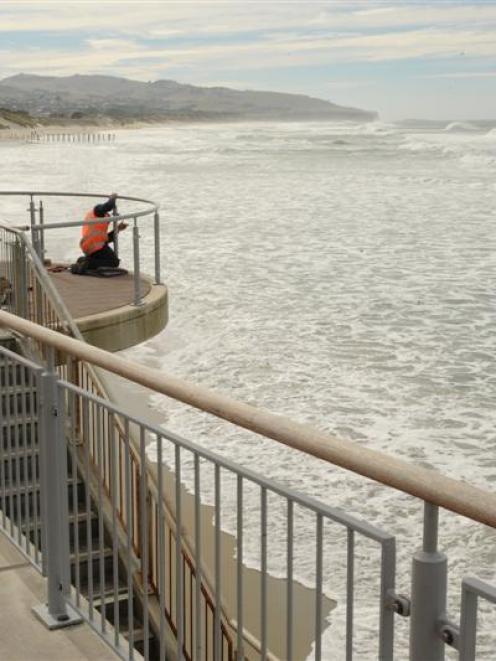 Sea wall at St. Clair beach. Photo by Stephen Jaquiery.
The Dunedin City Council has heard nothing more from the company it believes is responsible for the St Clair sea wall repair bill, but says a negotiated settlement, rather than court action, remains the goal.

Council transportation operations manager Graeme Hamilton said the council had written to the company, CPG, seeking a resolution over the outstanding bill issue, but had received nothing since then except an acknowledgement of the council's letter.

He still hoped the council could reach a negotiated settlement, rather than pursue compensation through the courts, but would give no timeframe, and said the issue appeared to be "on a slow boat".

"We're dependent on others, not least of which is the legal fraternity," Mr Hamilton said.

His comments came after councillors during January's draft budget meeting agreed to support initiating legal action against the company, which the council believed was responsible for the project's flawed design.

The sea wall was completed in 2004, but episodes of battering by heavy seas had caused its ramp and steps from the Esplanade at St Clair down to the beach to fail six times since then.

While awaiting a resolution, the council had continued to work with the company on a $250,000 redesign of the seawall's steps and ramps, he confirmed.

The work, which is to be considered again at the council's draft budget meetings in May, involves removing from the most exposed part of the wall the ramp and three of the four sets of steps.

However, the council was now also considering adding a new set of steps near the St Clair Salt Water Pool, in an area not as exposed to the elements, to provide better beach access for surfers, he said.

"We're still working with the designers to reach settlement, in more ways than one, and as well to reach a meeting of minds on design elements.

"It's not cast in stone at this stage."

CPG staff in Dunedin could not be contacted yesterday.