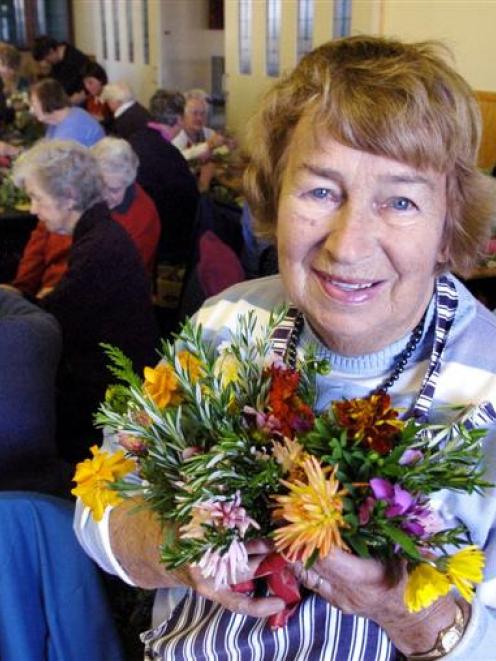 Anzac posy-making volunteer Jean Beck (82) at the United Services and Community Club Trust headquarters in St Kilda yesterday. Photo by Gerard O'Brien.
After years of devotion to organising Anzac posy-making sessions, ageing J-Force veterans and their partners are seeking younger people to take over the task.

The J-Force was the New Zealand army's occupational force in Japan after World War 2.

Veterans of the occupation, their wives and partners, and members of the RSA have organised the making of 3750 (and increasing) posies to lay on graves and plaques in the soldiers' section of the Andersons Bay cemetery on Anzac Day for more than 10 years.

Mrs Beck, who with 16-years posymaking experience has become something of a posy veteran, said she did it as a mark of respect and to remember those who had served and died, but age was no longer on her side.

In fact there were only about six J-Force group members, including one veteran, at the posy-making session at the United Services Club in St Kilda yesterday although more J-Force members helped at a similar session in Mosgiel.

Organising the making of the posies was quite a logistical feat and had become a large job for the J-Force, Dunedin RSA secretary Roy Thompson said.

He had approached one group about taking it over, but was only beginning discussions, he said.

The job included sourcing and collecting donated flowers, ringing around clubs and community groups to ‘‘round up'' some helpers and ‘‘just hoping'' enough people would turn up to help the usuals - RSA members garden club members, guides, scouts J-Force members - make them.

Luckily, this year brought the best turn-out of volunteer posy-makers yet with about 120 people helping out including a few veterans from the next door Montecillo Veterans' Home and Hospital, Mr Thompson said.

Posies, each containing a sprig of rosemary for remembrance and red wrapper to signify poppies, would be placed by volunteers during the posy laying ceremony at the Andersons Bay Cemetery today beginning at 9am.