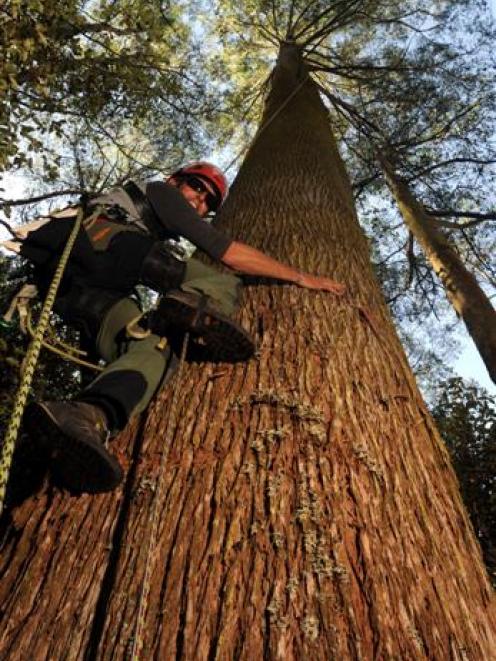 Arborist Drew Bristow, of Auckland, climbs New Zealand's tallest tree, an 80m eucalyptus in the Orokonui Ecosanctuary, Dunedin, yesterday. Photo by Peter McIntosh.
Hauling yourself up an 80m-tall "matchstick" may not be everyone's idea of a great day out, but arborist Drew Bristow is a man on a mission.

He and two arborist friends have a goal of climbing 10 of the nation's "greatest trees" over the next year, before moving on to the world's tallest.

The group had been talking "for ages" about climbing the eucalyptus, but a trip to spend the week with Otago Polytechnic arboriculture students provided the perfect opportunity for Mr Bristow.

The students, along with their tutor Mat Miller, watched as Mr Bristow climbed up the towering tree and "oohed" as the tree swayed 5m-6m in the wind.

Back on terra firma, Mr Bristow said the tree was "blowey" and "skinny", but "fun".

"It towers over everything."

It was different from the trees he usually enjoyed climbing, large natives which contained a world of organisms and plants in their branches.

In comparison, the eucalyptus was more like a "matchstick".

"It's just more the challenge of climbing to the top. It's not what everyone does on a Saturday. There are not many places you can go where no-one else has," he said.

Following yesterday's climb, Mr Bristow intended to return with a camera crew to film another ascent.

The footage would be used to raise awareness about trees and show all kinds of people could be interested in the environment.

"We get to see stuff the public never get to see. The only way to save stuff, in my opinion, is to show people what's out there.

"We lead normal city lives and it's acceptable to like trees at the same time."