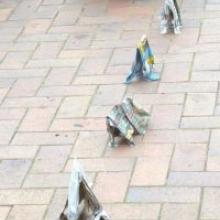 Artist Sonja van Kerkhoff, of Leiden, in the Netherlands, re-enacted her 2009 "Caravan to Istanbul" performance, installing a line of origami elephants from the Octagon to the Blue Oyster Project Art Space, in Moray Pl.

Van Kerkhoff (51) makes the elephants with ethnic language newspapers collected from countries she has visited.

"I've taken my herd for a walk through about 20 countries, now. The size of the herd varies. They don't live that long. One got his leg bitten off by wild dogs in Istanbul. Sometimes, they suffer," she said.

The installation referenced "the crossing of borders", she said.

"It's raising awareness of cultural differences. I do it to make us aware we're always crossing borders. The elephants are made of newspaper, because newspapers are the last cultural thing to change."

Van Kerkhoff graduated from the Dunedin School of Art in 1982 and previously lived in Dunedin from 1980-89. She has been exhibiting installations, sculpture and performance art nationally and internationally since the mid-1980s.

She held a talk, "Art as a Form of Narrative: Some Recent Installations, Performances and Interactive Artworks by Sen McGlinn and Sonja van Kerkhoff" at the Blue Oyster Project Art Space after the performance yesterday.