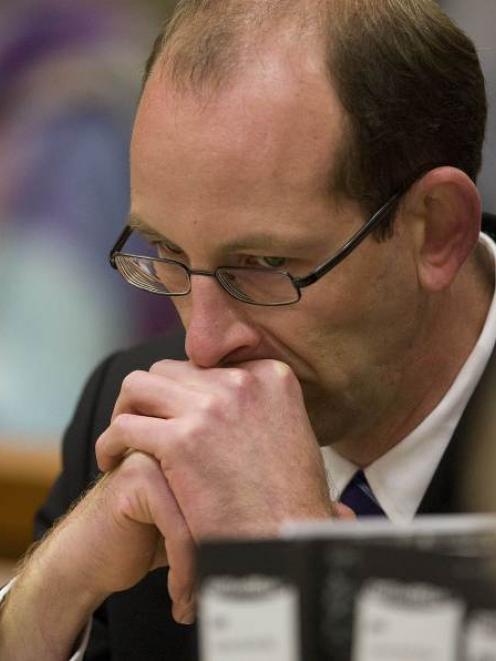 David Bain listens to evidence yesterday. Photo Pool
A suggestion Margaret Bain was worried her husband was so depressed he might get a gun and shoot the whole family was not something she had ever heard, one of Margaret's sisters said yesterday.

To defence counsel Michael Reed QC, Jan Clark said she and Margaret, her older sister by three years, were ‘‘very close'' and Margaret had never said anything to her about Robin being depressed.

When she and her husband met Robin not long before he and Margaret and three of their children were killed, there was ‘‘no indication of depression or of anything wrong'', Mrs Clark said.

He greeted them as always, with smiles and hugs.

Mr Reed said a minister's wife would give evidence Margaret had told her Robin might get a gun and shoot the whole family because of depression.

Asked if anything like that had been said to her, Mrs Clark said Margaret had never mentioned any such concerns.

Although the Crown case is that 37-year-old David Bain murdered his parents and siblings and set the scene to implicate his father, the defence says Robin was the killer, that he was clinically depressed and about to be exposed for an incestuous relationship with one of his daughters.

In earlier evidence, Mrs Clark said she and her husband had become aware of difficulties between Robin and Margaret, that Robin was living in a caravan on the Every St section. But her impression was Robin and Margaret were very united in their aspirations for their children and very supportive of them.

Margaret was always very positive about the children, Mrs Clark said. But she recalled her sister mentioning some months before the murders that she had had to speak to David about the inappropriate way he was acting towards the other children, and that Robin, not he, was their father.

And Margaret told her David agreed he had been taking on too much responsibility, that he should have been treating his siblings as friends and not taking on the parental role.

Both Mr and Mrs Clark also gave evidence about their nephew becoming distressed after he insisted on reading a report in the Otago Daily Times about the shootings. They had been asked by the police to try to keep newspapers away from him.

Mr Clark said Bain started reading the report, then said ‘‘rubbish'' and became ‘‘upset to a certain degree''. He took him upstairs, where it was more private, and Bain said ‘‘they lied to me'', that some of his family were out of their beds when they were shot.

The accused then ‘‘sort of clenched his fists and went into a trance-like situation'', Mr Clark said. He remembered Bain saying ‘‘black hands, black hands, coming to take them away''.

At that stage, he thought it was ‘‘a bit beyond me'' and arranged for Detective Greg Dunne to come and talk to David. And when Det Dunne had gone through the three scenarios of who might be responsible for the killings - Robin, David or someone from outside the family - Bain responded

‘‘I took that as a reference to Robin,'' Mr Clark said.

Mrs Clark described Bain sitting with his head in his hands, saying ‘‘They lied to me. They weren't asleep. They knew they were going to die. He had to look them in the eye and shoot them.''

Then everything changed, his body became tense, his fists clenched and he began speaking ‘‘as if the words were being dragged out of him''. She could feel spit on her face as Bain repeatedly talked about ‘‘black hands taking them away'', about ‘‘everyone dying'' and how he ‘‘couldn't stop them'', that he should have run faster.

She told him it was not his fault, but he repeatedly talked about ‘‘black hands taking them away''.

When she asked if they had tried to take him away, Bain said ‘‘no, just the family, just like [the movie] Schindler's List, dying, everyone dying all around''.

She asked if he had seen them dying.

He said ‘‘No, I only saw Mum and Dad and they were already dead.'' Bain was looking her straight in the eye and his speech was back to normal, Mrs Clark told the court.